"I think the team needs changes": why Musaev's departure from Krasnodar is called the only right decision

The match with Akhmat was the last in Krasnodar for Murad Musaev. This was stated by the coach himself after the crushing defeat. According to him, the team needs changes and fresh emotions. In an interview with RT, the former mentor of the southerners, Sergei Tashuev, suggested that the 37-year-old specialist did not have enough experience. And his colleague Haji Hajiyev called the main problem of the team the lack of character and balance between defense and attack. Why Musaev's departure in this situation can be considered the only right decision - in the RT material. 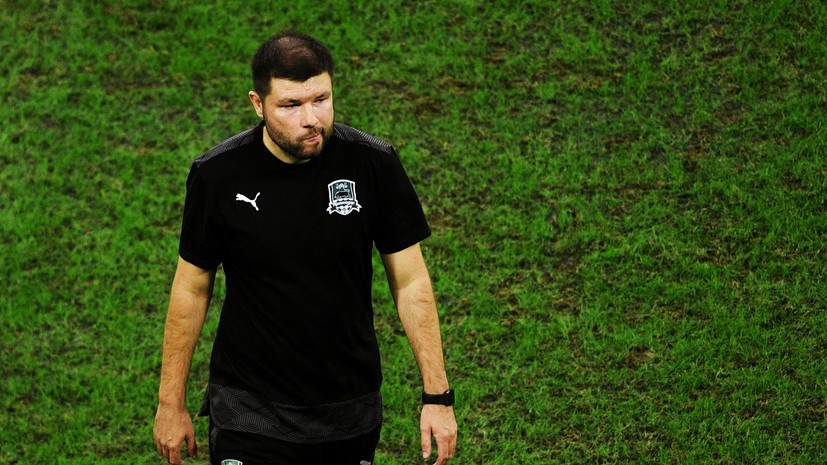 "Do you think I sit quietly and hold on to my seat?"

The devastating defeat by Akhmat, which became one of the largest for Krasnodar in history within the RPL, put an end to Murad Musaev's work at the club.

At least the 37-year-old specialist admitted that for him this match is the last one as head coach of the team.

“After the game, I talked to the management about my departure.

I think the team needs changes, new emotions and energy.

) for his support and trust.

Thanks to the fans, for three years I have felt your support regardless of the result.

Krasnodar is my home club, I have always given my all to work and achieving goals, was honest with the team and fans, "- quotes Musaev Sport-Express.

The ending of last year turned out to be quite successful for the southerners.

They finished third in the Champions League group and advanced to the Europa League playoffs, and also won three consecutive victories in the RPL with a total score of 11: 0.

However, after the resumption of the season, the team seemed to be changed.

To begin with, she flew out of the Russian Cup, losing to Rostov, and in the 1/16 finals of the LE suffered two defeats from Dynamo Zagreb.

In parallel, Musaev's wards were plagued by failures in the country's championship.

Three points against Tambov did not help Krasnodar much.

Next, the southerners once again demonstrated their lack of character, losing a two-goal advantage in the meeting with Dynamo - 2: 3.

True, he himself did not declare his resignation at the post-match press conference.

But Musaev admitted that he had asked for her after the defeat from Spartak, but the club's management decided to continue cooperation with him.

“I myself am categorically not satisfied with this situation.

Do you think I sit quietly and hold on to my seat?

I understand that all these defeats are the fault of the coach ”, - quotes the words of the expert“ Championship ”.

The main problems of Krasnodar, according to Musaev, are not in the level of skill, but in the psychological mood.

He also blamed his charges for lack of team spirit and lack of dedication.

In turn, the former mentor of the southerners, Sergei Tashuev, suggested how the change of the mentor would affect the team.

“There have been talks for a long time that Krasnodar needs to do something with the coaching staff.

I know that Galitsky always trusts specialists to the last.

But, by and large, the team needs something new, fresh ideas.

The results are poor this season.

This is the coaching profession.

Today you can win everything, and tomorrow you can lose your job, "the specialist said in an interview with RT.

"Perhaps Musaev's resignation will still help the team to shake things up."

Musaev, one way or another, will remain in the history of Krasnodar, as one of the main old-timers of the club, because he started working at the academy back in 2011.

In 2016, he led the youth team of the southerners, with which he became the champion of Russia.

And in April 2018, after the resignation of Igor Shalimov, Galitsky unexpectedly entrusted the main team to the specialist, although he was only 34 years old.

As a result, Musaev managed to successfully end the season and, according to its results, get rid of the "acting" prefix.

“Age was definitely not fundamental to him.

Take even such masters as Valery Lobanovsky and Nikita Simonyan.

They started coaching when they were young enough, and this did not stop them from achieving success.

Yes, and Musaev already has some experience behind him: he took RPL medals and went with the team to the Champions League group stage, "the famous coach Haji Hajiyev said in an interview with RT.

However, he failed to bring the ambitious team to a fundamentally new level.

Krasnodar, under the guidance of a young specialist, could not rise above the third place in the Russian championship.

In the 2018/19 season, the team was on the second line for a long time, but in the key match lost to Lokomotiv and, losing to the railroad workers only by additional indicators, lost the opportunity for the first time to directly break into the Champions League group stage.

The situation repeated itself last year.

Musaev's wards failed the summer part of the championship, having won only two victories in the last six RPL matches, and again let Lokomotiv go ahead.

Even serious spending on the transfer market did not help to climb higher.

In the summer of 2019, the club gave about € 30 million for Remy Cabella, Tonny Vilhena, Yegor Sorokin, Cayo Pantalean, Younes Namli and Ruslan Kambolov.

Galitsky hoped that the newcomers would take his brainchild to the Champions League group stage, but this did not happen.

In the third qualifying stage, the Russian team knocked Porto out of the fight, and in the playoff round lost without a chance to Olympiacos with a total score of 1: 6.

The devastating defeat on the road turned out to be especially painful - 0: 4.

It seemed that after such a failure Musaev would be fired, but the club's management did not take any drastic steps.

And the owner initially showed confidence in the specialist.

Ultimately, a year later, Krasnodar nevertheless achieved the coveted goal thanks to eminent recruits and reached the main round of the Champions League.

In the confrontation with PAOK, Cabella scored two goals, and Berg gave an assist to the Frenchman at home.

In addition, the club has strengthened with a number of high-quality Russian footballers: Evgeny Chernov, Evgeny Markov, Igor Smolnikov and Alexei Ionov.

True, the latter could not play in the Champions League.

“In my opinion, the previous Krasnodar roster was still stronger than the current one.

Starting from Andreas Granqvist, who cemented the center of defense and wore the captain's armband, and ending with Mauricio Pereira and Charles Kabore, who acted in the middle of the field, ”Hajiyev said.

The performance of the southerners at the group stage of the tournament can be generally considered successful.

They scored four points against Rennes, made a peace deal with Chelsea on the road and imposed a fight on Sevilla in both games.

At the same time, in most of the meetings, Musaev was forced to do without a number of leaders who were out of action one after another due to the coronavirus and various injuries.

Under these conditions, the coaching staff did everything they could.

“Perhaps Musaev’s resignation at the moment will still help the team to shake things up.

In this case, the psychological mood of the guys may switch a little.

It seemed that in the spring, "Krasnodar" with the return of the leaders to the ranks will add, but this did not happen.

On the contrary, the team, as already mentioned, literally went downhill.

The failures of the southerners are especially indicative against the background of Lokomotiv, which conceded five unanswered goals in Krasnodar back in December.

However, in the winter, the railroad workers held a high-quality training camp and got in excellent shape.

In addition, Marko Nikolic made a number of bold tactical decisions, some of which were even used by Stanislav Cherchesov in the last matches of the Russian national team.

As a result, the red-greens won five consecutive victories in the RPL with a total score of 11: 1 and reached the quarterfinals of the Russian Cup.

Krasnodar did not benefit from the pause.

Musaev's team flew out of the National Cup and the LE, and in five RPL matches they scored only four points, conceding 16 goals in them.

At the same time, one gross mistake after another throughout the season makes Kayo, whose replacement in the center of defense the club has not found.

At the heart of it could have been replaced by Urosh Spaic, but it was the Serb, not the Brazilian, who was excluded from the application as the ninth extra foreigner to please the new limit on legionnaires and were sent on loan.

“The impression is that one group of players should be on the attack all the time, and someone else has to take the ball away.

The composition is extremely unbalanced.

Almost all of the team's defenders are not up to the Premier League level.

It is clear that the level of motivation is also low.

When the team succeeds, it achieves the result.

As soon as difficulties arise, he gives up.

There is not enough character, ”Hajiyev complained.

Finally, Galitsky, as you know, very closely follows the development of the students of the club academy, and they have recently stopped growing.

The former coach of the youth team boldly trusted the players he knew well.

It was with him that Matvey Safonov, Magomed-Shapi Suleimanov, Ivan Ignatiev and Daniil Utkin really played in the main team.

But the current season can hardly be called successful for them.

Utkin lost the competition in the support zone to the legionnaires.

Suleimanov, who was once considered the main young talent of Russian football, recovered for a long time after suffering a coronavirus and did not manage to return to the base.

Ignatiev joined Rubin back in January 2020 after a conflict with the management.

And only Safonov plays at a relatively high level.

Last year, Matvey made his debut in the Champions League group stage, although he made mistakes, and received the first call to the Russian national team.

Other young graduates of the academy do not show themselves in any way and enter the field only sporadically in case of injuries of the main performers.

Krasnodar always evokes sympathy and benevolent attitude from the fans.

Galitsky does a lot for a good game and invests personal funds.

I would like the club to develop and move on.

I'm sure it will happen anyway.

Let's hope they will make the right conclusions and choose the right direction, ”Hajiyev said hopefully.