Sharjah returns the "key to the league" to the island

Al-Jazirah regained the top of the Arab Gulf League at the conclusion of the 23rd round yesterday, after achieving a difficult victory over Al Wasl by three goals to two, to raise Al-Jazirah's score to 50 points, and Al-Wasl’s balance stopped at 34 points in ninth place, while Bani Yas stumbled with a draw against Sharjah with one goal per F 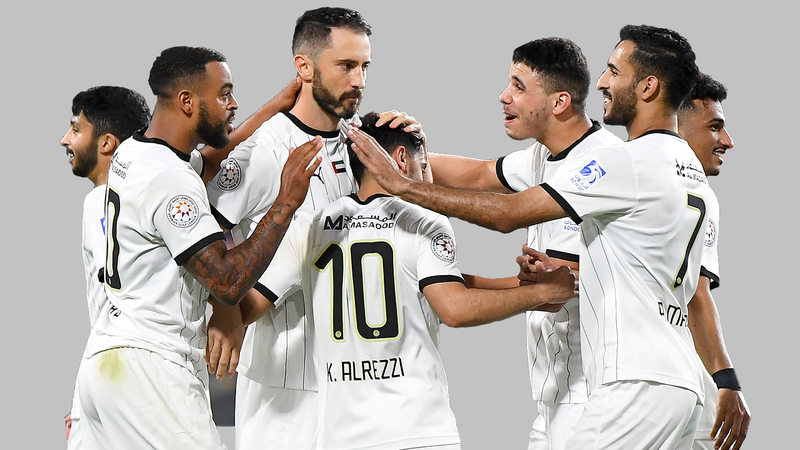 Sharjah returns the "key to the league" to the island

The joy of Al-Jazeera players won the precious victory over Al Wasl.

Al-Jazira regained the top of the Arab Gulf League at the end of the 23rd round yesterday, after achieving a difficult victory over Al Wasl by three goals to two, to raise Al-Jazirah to 50 points, and Al-Wasl’s balance stopped at 34 points in ninth place, while Bani Yas stumbled with a draw against Sharjah with one goal for each team "Al-Samawi" retreated to second place after the competition was issued for one round, and his balance was raised to 49, while "the king" moved away from the competition completely by reaching 42 points.

The two matches witnessed great excitement, as Al Jazeera almost lost two points in the title fight, after Al Wasl presented a strong match and tied with the owner of the land, despite the progress of "Abu Dhabi Pride" twice, and despite the scoring of the Serbian Milos Kosanovic the third goal, but Fabio Lima almost scored a goal. The draw was a deadly time, but his ball rebounded off the post, and Ali Khasif starred in facing another opportunity.

As for the second match, Baniyas started strongly and was the best party in the match. He advanced from a penalty kick scored by the Brazilian Joao Pedro, but the Brazilian Caio Lucas scored the equalizer four minutes before the end of the first half, while the performance of the two teams declined in the second half, and "the king" was the closest to achieving The victory, but the crossbar addressed the most dangerous chances of the meeting from Italian Igor Cornado.

Sharjah succeeded in obstructing Bani Yas, removing him from the lead, and gifting it on a gold plate to his rival, Al Jazira, after a 1-1 draw with him, during the meeting that brought the two teams together yesterday, at Sharjah Stadium in the 23rd round of the Arab Gulf League, as Bani Yas raised his score to 49 points, a difference. One point from Al-Jazira, down to second place, while Sharjah fell to fourth place with 42 points, equal to the fifth victory.

With this result, Sharjah ignited the lead again in the league title, and Bani Yas did not maintain his lead in the match with the goal of a penalty kick by the Brazilian player Joao Pedro (23).

And the Brazilian player of Sharjah, Caio Lucas, succeeded before the end of the first half to return his team to the atmosphere of the match again by scoring the equalizing goal «41» with a strong shot in the goalkeeper Fahad Al-Dhanhani, and the referee saved the video «The Mouse» Bani Yas from the loss after canceling a goal for Sharjah scored by Luan Pereira « 93 ».

Although Bani Yas initiated the attack and appeared the most organized and widespread on the stadium, the attack and led several attempts to reach Sharjah's goal, taking advantage of the retreat of the owners of the land, but he did not maintain his advance in the first half.

Sharjah made an emergency substitution in the first half, with the injured Saif Rashid "31" leaving and the entry of Luan Pereira. Al-Samawi goalkeeper Fahd Al-Dhanhani responded on more than one occasion to the attempts of Kayo and Igor to score his net.

Caio (left) attempts to gain possession of the ball before Fawaz Awanah.

Kusanovic and the governor save the island from Lima bites

Al-Jazira achieved a difficult victory over Al-Wasl, with three goals to two, at Mohammed bin Zayed Stadium, after the match witnessed great excitement from the two teams, and despite Al-Jazira’s preference for possession of the ball in the first half, Al Wasl imposed his way of playing through great pressure on the players of «Abu Dhabi Pride. », While Brazilian Santos Neres scored the first goal by mistake for the benefit of Al-Jazira when Khalfan Mubarak played a direct free kick, and Neres met it with his head in the net before it was caught by goalkeeper Hamid Abdullah (13).

For his part, Al-Wasl entered the atmosphere of the match after 20 minutes had passed, after the Brazilian Ronaldo Mendes, who returned the "emperor" to the match, played a beautiful cross, and Fabio Lima met it with a strong shot that was saved by Ali Khasif, and Lima completed it in the net (22), while Al-Jazira pressed in the last 15 minutes of the first half, and Ali Mabkhout scored the second goal with great skill, when he received a pass from Khalfan Mubarak, and Mabkhout dodged the goalkeeper and hit the ball in the net (36).

In the second half, Joao Figredo scored a goal for Al Wasl, but the referee canceled it for offside after using video technology, while Ali Mabkhout fired a ballistic ball that rebounded from the crossbar (57), and in the 64th minute Fabio Lima scored the second goal in a wonderful way, and Kosanovic responded by scoring the third goal from A direct free kick (69), and the post hit a dangerous ball from Fabio Lima (86), to end the match with the victory of the island.