Rumors about Trusova's return and threats to court: how the conflict between the director of "Sambo-70" and Plushenko's wife unfolds

The director of the Sambo-70 school, Renat Laishev, announced the return of figure skater Alexandra Trusova to the group of Eteri Tutberidze. According to him, the athlete herself informed him about the desire to leave the Evgeni Plushenko Academy. At the same time, both schools denied information about the transfer, and Plushenko's wife Yana Rudkovskaya called Laishev a “storyteller”. In addition, Laishev threatened the producer with a court for her statements about him. 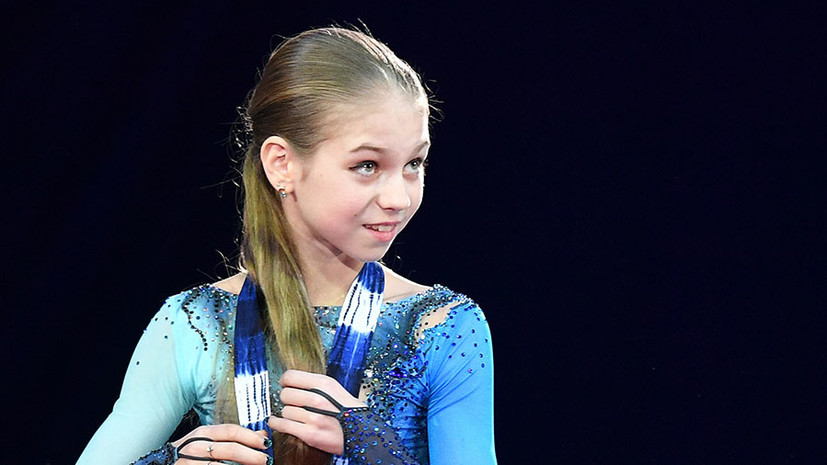 In Russian figure skating, a new conflict between the teams of Eteri Tutberidze and Evgeni Plushenko continues to gain momentum.

The director of the Sambo-70 sports school, Renat Laishev, made an unexpected statement that the bronze medalist of the World Championship Alexandra Trusova was leaving the Angela Plushenko Academy and returning to Khrustalny.

Given that the message appeared in the media on April 1, it could be mistaken for a rally, but the official stressed that he was not joking at all.

“Alexandra Trusova will definitely come back.

This will happen one of these days.

There is no joke in this.

This is one family, she is a very good girl, we all love her.

We know that with her wise parents, with her prudence, she will be in a single Sambo-70 family, - RIA Novosti quotes Laisheva.

Soon the director of "Sambo-70" added that the skater herself promised him to return to the Tutberidze group, which she left in May 2020.

In addition, he again could not resist attacking Plushenko and his wife Yana Rudkovskaya.

In his opinion, they "live on rumors and scandals," while his school primarily cares about students and their athletic performance.

The reaction of the opposite side was not long in coming.

Rudkovskaya called Laishev a “storyteller,” and Plushenko noted that they appreciated his April Fool's joke.

“Take away the phone from Laishev.

It will be April 2 soon, ”the coach wrote.

Recently, transfers between the two teams are far from uncommon, so the official's statement caused a violent reaction.

And although the president of the Russian Figure Skating Federation (FFKKR), Alexander Gorshkov, assured that he did not know anything about Trusova's return, some experts began to seriously discuss whether such a step would benefit the skater herself.

So, the silver medalist of the 2012 World Championship Alena Leonova recalled that Trusova made more progress in Khrustalny.

And the honored trainer of the USSR Tatyana Tarasova emphasized that the last word should remain with the athlete.

“Her opinion is the most important thing.

But why, if she went to Plushenko, shouldn't she return to Tutberidze?

It seems to me that this can be beneficial.

And there is no need to take offense at her, she is a child and is looking for her own truth, ”Tarasova is sure.

As a result, the possibility of a potential transfer was denied first by a source in "Plushenko's Angels", and then by Eteri Tutberidze herself.

“Seriously, what comment can be made about her return ... Who said that?

Laishev has absolutely nothing to do with our work.

Listen, leave me alone, no, I do not confirm anything, ”the REN TV website quotes the specialist as saying.

Another dispute between the two schools began immediately after the World Championships in Stockholm.

Then Rudkovskaya ridiculed the mistake of one of the publications, who called her the wife of Alexei Yagudin.

She joked that it would be worse if they called her Tutberidze's husband.

In response, Laishev insulted the producer and complained about Trusova's "theft".

Many were outraged by the official's incontinence, but he was in no hurry to take his words back.

On the contrary, he accused Rudkovskaya of spreading rumors that he was living with Tutberidze, and also again questioned the work of Plushenko's team.

Subsequently, the director of "Sambo-70" even threatened the producer with a trial.

“With all the statements and other cases, I am ready to sue Rudkovskaya if she continues to develop such nasty rumors about my family.

I have a family, and there are questions in it: "Dad, why do they say that?"

I can't say that there is such a stupid Rudkovskaya who says this.

Does she want to spoil my family?

This is the most ugly, uncultured and indecent business ", - quotes Laishev" Championship ".

In turn, Rudkovskaya denied accusations of spreading false information about Laishev, saying that she had no idea what he looked like.

In addition, she threatened him to gather the former Khrustalny skaters and their relatives and disclose incriminating information about the school and its director.

“They will be happy to share with the audience the Khrustalny kitchen, where he controls and puffs out cheeks!

There will be enough stories for more than one program, believe me!

And skeletons from the bins will sprinkle - the skeletons of the Punchinel! ”, - quotes Rudkovskaya“ Komsomolskaya Pravda ”.

Conflicts between representatives of the Tutberidze and Plushenko schools began in the past, when Khrustalny first left Trusova, and then Alena Kostornaya, who later returned to her former mentor.

The parties periodically accuse each other of enticing athletes, incorrect work methods and allegedly unfair assessments at competitions.

“For me personally, the World Cup is, of course, more interesting than this Cold War.

I do not know anything about Laishev's insulting remarks about Rudkovskaya.

Well what can I say?

This is again some kind of nonsense.

I have nothing to say, let them figure it out themselves.

Of course, Laishev's words are unacceptable in relation to a woman.

But everyone has their own cockroaches, so I don’t know, ”Leonova said in an interview with the“ New Age ”portal.