Rooth: "Not many teams are at Luleå's level"

Yesterday, Luleå won its third straight Swedish Championship gold after a victory against Brynäs in the final series. And Luleå will continue to dominate Swedish women's hockey, according to SVT's expert Maria Rooth. - There are not many teams that are at Luleå's level. Brynäs is on its way, but more teams must take the baton, says Rooth. 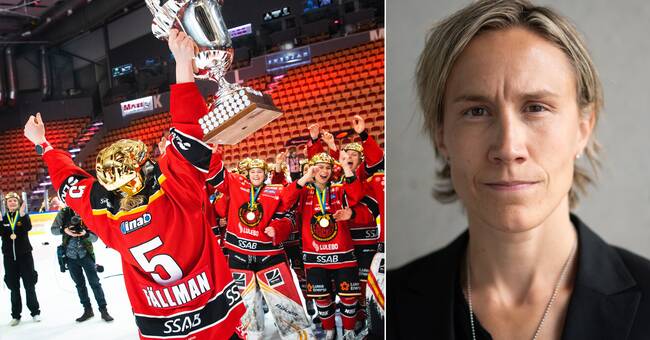 The favorite Luleå kept up the pressure.

After 3-0 in the final series against Brynäs, the club took another Swedish Championship gold on the women's side.

- It was not unexpected.

Luleå has dominated for the past five years.

They have a clear strategy already from the boardroom and it can be seen, says SVT Sports expert Maria Rooth in Morgonstudion.

Rooth emphasizes that it is the collective that makes Luleå so good, but still highlights some players.

- Petra Nieminen has decided two matches in overtime, as long as it is fantastic.

Noora Tulus has also been really good throughout the final series and then we have Jenni Hirikoski who is one of the very best.

This year's breakthrough, however, is found in the final opponent Brynäs.

- Josefin Bouveng has been responsible for a huge breakthrough.

She is un-Swedish in her way of playing, goes straight to goal and puts her pucks.

Brynäs has something to build on in the future.

For Luleå, yesterday's Swedish Championship gold was the fourth in five years and the third in a row.

- There are not many teams that are at Luleå's level.

Brynäs is on its way but more teams need to grab the baton.