"It would be cool to make a quadruple rittberger": Trusova on her jumps, maximalism and loneliness at the World Cup

The absence of spectators in the stands and parents in the access zone affected the sensations of debuting at the World Figure Skating Championships, Alexandra Trusova, bronze medalist of the singles tournament, said in an interview with RT. According to the athlete, throughout her stay in Stockholm, she acutely felt the lack of communication. The two-time world champion among juniors also said that she dreams of mastering a quadruple rittberger, told which jumps are easier to perform with raised arms, and explained why she does not like to simplify her programs. 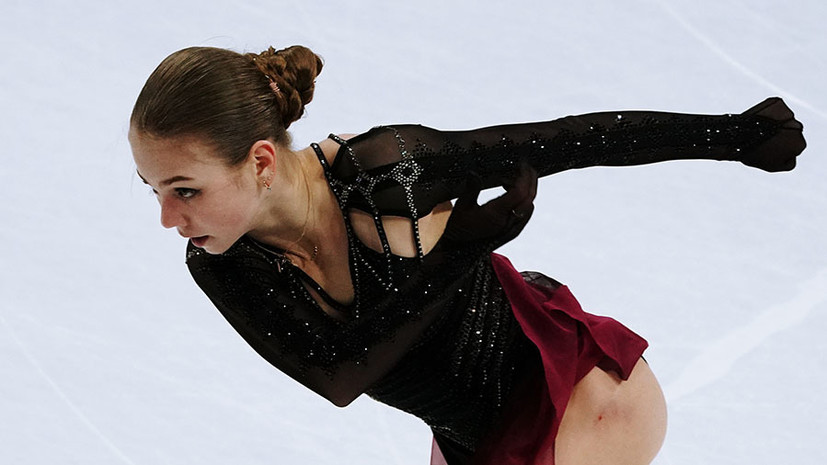 - Alexandra, the first adult world championship is actually behind us.

How will you remember him?

- This is a strange competition, not at all like the world championship that I imagined.

Firstly, there were no spectators, so the feeling that we arrived at the main start of the season was somehow blurred.

On the other hand, I constantly reminded myself that this is not just a start, but a tournament of the best of the best.

It made me a little nervous.

Last year I was looking forward to it so much, I wanted to perform so much, but it was canceled.

Therefore, now I was already glad that I still had the opportunity to speak.

- I was in the gym at the training session in which you performed all five quadruple jumps from the free program, and even thought that perhaps it could be a mistake - to throw out so much energy during the warm-up skate.

- I had no such thoughts.

That workout was no different from my usual workouts.

I understand that I have to skate cleanly in competitions, and for this I need to jump constantly, no matter if it is a regular training session or an official one.

Also on russian.rt.com The character of Trusova, the will of Tuktamysheva and the strength of mind of Shcherbakova: Russian figure skaters took the entire podium at the World Cup

- Figure skaters like to say that the fight for medals in major competitions starts right at the official training sessions.

How did you feel it in Stockholm?

Although worried more than usual.

But overall I felt comfortable.

After all, I already competed with all adult girls last year, so I understood what and how could happen and what I needed to be prepared for.

- With the only caveat: before, your mother was always with you.

Now, for the first time, you are left in a competition without parental care.

I really missed my mother.

As well as Dmitry Sergeevich (Mikhailova. -

I've never really been alone for so long in my life.

This is a very strange feeling.

It seems that we talked a lot, I constantly called Moscow between trainings and performances, talked with my parents, with the coach, but when you end the conversation, you feel very keenly that there is no one next to you.

Although it cannot be said that I was not ready for this.

I was warned in advance that only one coach can go with me to Stockholm.

- Were you upset when you found out about it?

I wanted not only Yevgeny Viktorovich to stand at the side, but also Dmitry Sergeevich, to which, I confess, I'm used to.

- The first feeling after a short program, where the cascade did not work out - shock?

- Even before the World Cup, I told both coaches and parents that if I didn't do anything difficult in the short program, I would definitely be mistaken in the easy one.

In this respect, I know myself very well.

Well, it never happens for me to remove all the complexity - and skate perfectly.

It's easier for me to tune in to perform with a complex program.

- When did you first realize this?

- Yes, somehow from the very childhood I learned: if the coaches make my task easier, I immediately start to make mistakes.

This was the case at ten years old and later.

Then I learned to skate a program with triple jumps more or less cleanly.

When we started to insert quads, everything repeated itself: complex programs turned out much better.

- After you mastered quadruple jumps, did it become easier or more difficult to perform triple jumps?

- You know, I remember well how I learned to jump triple and completely stopped understanding how to make two turns.

When the quadruple lutz jumped for the first time with her hands up, she almost lost the triple - she often began to twist it.

Also on russian.rt.com "The best gift": how Russian figure skaters took the entire podium at the World Cup

- Is it more comfortable to jump with your hands up?

In my opinion, raised arms help to enter the axis of rotation more correctly and more accurately.

They seem to pull the body up, respectively, it becomes more convenient to land.

- Compared to how you skated at the beginning of the season, did your feelings change?

- It is difficult to compare during the competition, the sensations are always different.

But in training, I definitely became more stable.

I began to understand better what I was doing, to feel better the program, the music.

It is a pity, of course, that in Stockholm not everything turned out as we wanted, but I think that sooner or later it will work out.

- What were you thinking before the free skate?

- Yes, about anything that would be interesting.

I slept normally, figure skating never dreamed of, although sometimes it happens to me.

I tuned in, I wanted to skate as well as possible.

- What do coaches usually tell you before a hire?

Basically, we don't talk much.

I have very complex content, so the coaches try not to distract me at all, not to interfere with my tuning.

- When you start skating, keep in mind the whole program or go, as they say, step by step - from element to element?

In the program, you do not even have time to rejoice when you have done a good jump, you need to immediately begin to tune in to the next one.

All emotions only after.

- What do you most want when the competition is over?

Speaking of this championship, what I wanted most of all was to see the boys skate live.

Fortunately, we got such an opportunity: we were allowed to watch the competition from the tribune.

And I really want to go home.

- What would you like to be remembered by your fans?

- I will not talk about the desire to win the Olympic Games - everyone wants it.

But I often think that it would be cool to do a quadruple rittberger and be remembered for not only being the first to jump all quadruple jumps, but also doing it well.