Guide: Everything you need to know before the Formula 1 season

Lewis Hamilton is chasing a unique eighth World Cup title, Schumacher's son is making his debut and experienced Fernando Alonso is making a comeback. A historic budget ceiling and a record-breaking season. Here's everything you need to know before this year's Formula 1. 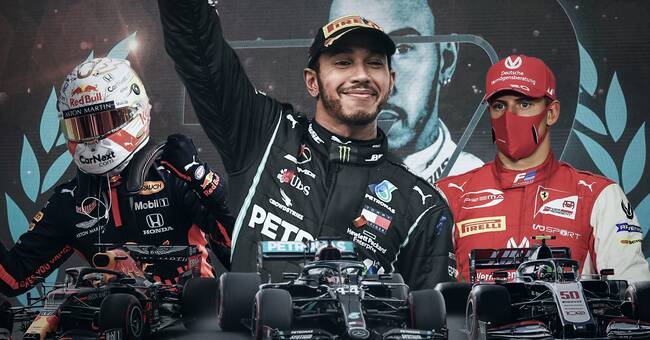 Premiere in Bahrain on March 28.

The season ends in the United Arab Emirates on December 12.

There are new times in F1.

Nowadays, the start of the races must take place at full hour instead of ten over.

23 races is the largest calendar in F1 history.

It remains to be seen whether the corona pandemic will allow the season to go ahead as planned.

Last year, there were only 17 races between July and December, where Monaco, among others, had to cancel.

Premiere for Saudi Arabia in F1.

The city line in Jeddah has, according to simulation, an average speed of 252 km / h.

Only Monza (264 km / h) is worse and as an urban railway, Jeddah is clearly the fastest.

The evening race on December 5 is also the second longest, after Spa in Belgium.

In 2021, a new radical regulation would be introduced - to make F1 much smoother.

But the changes have largely been put on hold until 2022 due to the pandemic.

But there is some news this year as well.

Here are the key ones:

A poll is waiting to test so-called sprint qualifiers on Saturdays.

A shorter race that partly determines the starting order in Sunday's race, and partly gives points to the three fastest drivers.

The idea is to make the whole competition weekend more interesting.

It will be at the expense of training time, which is shortened to 60 minutes per training.

The test is scheduled to take place at three grand prix: Silverstone, Monza and Interlagos.

Lewis Hamilton extended a year with Mercedes and could become the first driver to win eight World Championship titles.

Right now he is standing alongside Michael Schumacher.

Hamilton has won six titles in seven years, and four in a row.

What can stop him?

Last year, he took over the records for most pole position and the number of GP victories.

Red Bull is seen as the main challenger to Mercedes and impressed most of all stables on the pre-season tests in Bahrain.

In the 2010s, Red Bull dominated with Sebastian Vettel and Mark Webber.

Now it is Max Verstappen and new teammate Sergio Perez, World Cup four last year, who will do it.

Nine years after Michael Schumacher said hello then to F1, his son Mick makes his debut.

The legend's son has been given control by Haas.

It remains to be seen how last season's Formula 2 champions handle the spotlight and expectations.

See the full list of the stable's drivers in the fact box at the bottom.

After a two-year absence, Fernando Alonso, 39, is making a comeback.

15 years after his last of his two world championships.

The Spaniard, who in recent years has tested both Le Mans and the Dakar Rally, says himself that he is a better driver than ever, better than both Hamilton and Verstappen.

See the former F1 star turn around in the Dakar Rally

Aston Martin is back in F1 after 61 years of absence.

Among newcomers is also Alpine, which has taken Renault's place.

Russian athletes are prohibited from competing under the Russian flag in World Cup and Olympic contexts.

This also applies to the Russian driver Nikita Mazepin in Haas.

But can Haas drive a Russian flag ON the car?

Haas did so during the F1 tests in Bahrain, which has prompted the anti-doping agency Wada to start an investigation.

* Downforce is a downward aerodynamic force that is created at high speeds and that pushes the car against the asphalt.