Young Orange counts again: 'If you don't want to join, you won't be part of it'

After years of struggling, the Juniors are finally back on the highest podium. The team of national coach Erwin van de Looi is also one of the top favorites at the first European Championship since 2013. "More fun is radiated and that is very important." 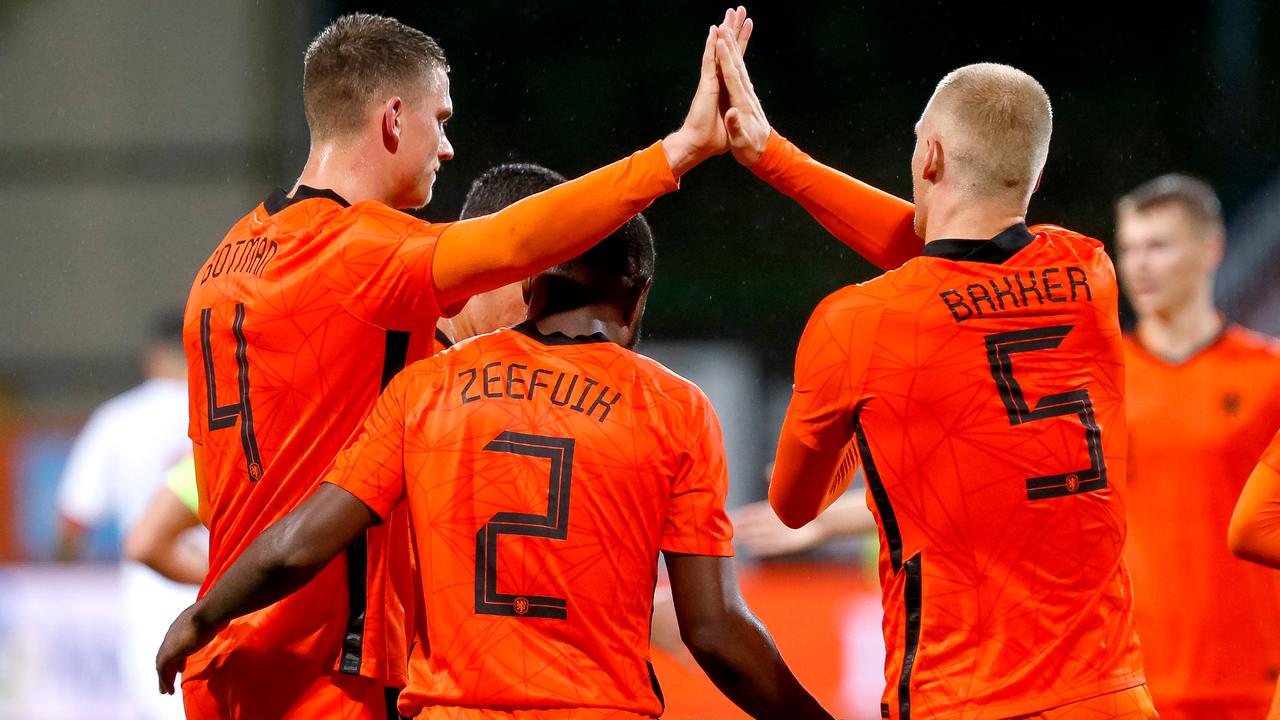 After years of struggling, the Juniors are finally back on the highest podium.

The team of national coach Erwin van de Looi is also one of the top favorites at the first European Championship since 2013.

"More fun is radiated and that is very important."

In March 2019, Van de Looi writes a number of questions on a board at the training camp of the Dutch Juniors in Spain.

How do we want the public to see us?

How do we want the press to see us?

How would we like the national coach of the Dutch national team to see us?

He wants his players to think about that.

At that time, the Juniors are no longer a shadow of the team that captured the European title in 2006 and 2007.

The enthusiasm about the highest youth team of the KNVB has disappeared.

Poignant example: at the end of 2017, stories appear in the media about pizzas in the dressing room and visits by the players to McDonald's after games.

"That was exaggerated", says current captain Teun Koopmeiners, who made his debut for the Dutch Juniors in March 2018.

"How do I put this into words ... It is a fact that things could be better within the team at the time. I think that training is being done harder at the moment and that the group feeling is better. More fun is radiated and that is very important."

The result is that the Juniors will finally be back at a European Championship next week.

The first nine matches were won and only the last one lost.

The goal difference: 46 for and 5 against.

Van de Looi, previously trainer at Willem II and FC Groningen, will start his job as national coach of the Dutch Juniors in July 2018.

Compared to his predecessor Art Langeler, he rules with a heavy hand.

While it rained player cancellations during his period, Van de Looi does not accept it just like that if someone is absent because of a pain.

"If you do not want to join, then you will not be included, no matter how talented you are. We want to stand for something together, play football in a certain way. We are all working hard on that and that is one of the success formulas of this entire cycle. But the credits certainly shouldn't go to me alone. "

To change the image of the Dutch Juniors, the KNVB gives

make a documentary series about the team.

What we have seen since September 2019: the special handshakes between Koopmeiners and Owen Wijndal, Sherel Floranus fleeing monkeys on a rock in Gibraltar and no pizza, but fruit and sushi in the dressing room.

"The documentary series played a very important role in this," says Koopmeiners.

"We wanted to give a glimpse of how we are at home, interact with each other in the hotel and explain in interviews what we like in life. We are not just those people who show cock behavior during a competition."

"The people at home must see a driven team rolling up their sleeves. Regardless of the result, they must be able to say that we have made it a match. They must see us laugh after a goal and think: hey, those guys think it is. fun to play football. That has been quite successful so far, but that is also due to the results. "

'Ron Vlaar has told it a thousand times'

All positive changes should lead to a third European title for the Dutch Juniors.

With players such as Koopmeiners, Noa Lang, Myron Boadu and Justin Kluivert, this is certainly possible.

First, Romania, Germany and Hungary await in the group stage and then possibly the quarter-finals, semi-finals and final in two months.

"If you say that we are top favorites, then you are going very fast", says Van de Looi.

"Let's get through the group stage first. But we have certainly set the bar high, we are going for the highest possible and that is the European title. Then you can say that it can only be disappointing, but with that attitude you can also achieve something very beautiful. "

"I also said to the players: almost everything is different in this European Championship due to the corona crisis, but one thing remains the same and that is that this is a great stage. Great players participated in the youth European Championship and great players also participated in the tournament. Partly because of that, they have had a fantastic career. These guys want that too. "

Koopmeiners: "Ron Vlaar has told AZ a thousand times that he has won this European Championship. He has been so tough that I think it is laughable to be able to respond once with: yes, I have that cup too. You take it easy. But without any fun: when you see how enthusiastic Ron is about this tournament, it only motivates you. "

See also: This is the schedule of the Jong Oranje at the split European Championship under 21