Buffalo pressured the New York Rangers in Madison Square Garden, but it was a new loss - the 14th straight and now the team touches the negative record white on losses in a row. - We have to get through this. We have to make sure we get better, says interim coach Don Granato after 3-5. 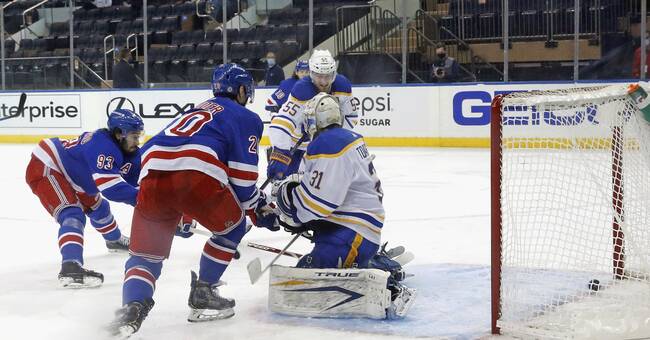 On February 23, Linus Ullmark played big in Buffalo's goal, and Victor Olofsson and Rasmus Asplund both scored when the team defeated New Jersey 4-1.

The mouthpieces pointed upwards in the team.

Rasmus Asplund scored a new goal away against the New York Rangers on Tuesday night, his first since the net knowledge against New Jersey.

But that was the only similarity.

Rangers won 5-3 and covidded Buffalo went on a new loss - the 14th straight since that win 28 days ago.

The coach had to go

Meanwhile, coach Ralph Krueger has been fired, Linus Ullmark has been injured for a long time and his Swedish goalkeeper colleague Jonas Johansson has been transferred to Colorado.

When cage keeper Carter Hutton injured himself after only two saves, Dustin Tokarski had to jump in between the posts for his first NHL game since 2016. He managed to counter 33 shots, but could not stop the Rangers onslaught - the home team won the shooting statistics by 40-19.

- It was very funny.

That was a while ago.

It has been a bit up and down the last four, five years but also good years, says Tokarski.

Of course, the timing was a bit painful, but he fought and made a really good effort, praises the temporary coach Don Granato at the press conference after the match.

Granato, who has been in charge of the team for two matches, praises his team and says that he still saw flashes of light.

- The guys showed that they believe that if they give everything, the results will come.

The body language out there (on the ice) was very good.

- They played hard and made it difficult for us, all praise to them.

Of course we wanted to win, a victory against Buffalo is worth as much as one against Washington or Philadelphia.

So we had to drive on, he says.

"Must realize the fact"

Buffalo has now only won six of 31 games so far, is the worst in the league and about to miss the playoffs for the tenth season in a row.

The 14 straight losses, two of them in overtime or penalties, touch on the longest losing streak in the NHL since penalties were introduced in 2005.

- We can not look at the losing line, this is competitive sports and we have to get through this.

We have to make sure we get better, says Granato.

- We must realize the fact, accept it and not be ashamed.

We need to find a way to do what we can to take control of what we can control and move forward.

The next chance to break the losing streak will be away against Pittsburgh on Thursday night, Swedish time.