"He wants to follow in his father's footsteps": Nurmagomedov lost his place in the UFC ratings and decided to become a coach

The absolute fighting championship excluded Khabib Nurmagomedov from its ratings. In this regard, the place of the Russian at the top of the list of the best fighters, regardless of weight categories, was taken by John Jones, and his successor in the lightweight division will be determined in May. The undefeated champion announced his intention to take up coaching. 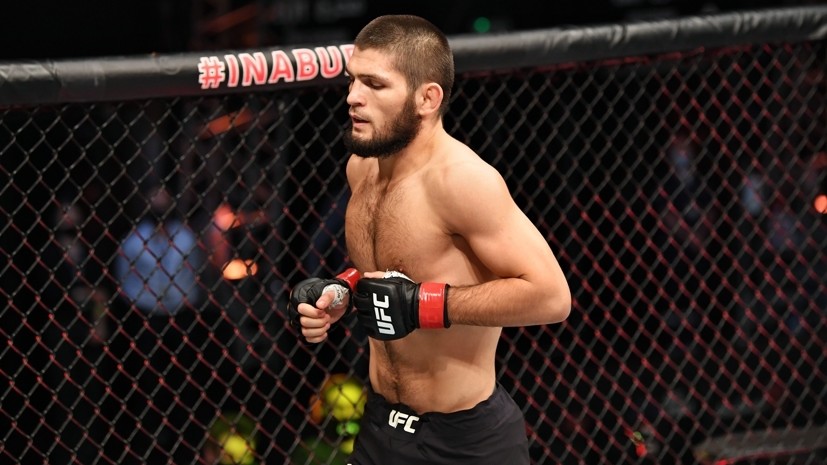 The exclusion of Khabib Nurmagomedov from the UFC ratings could have taken place much earlier.

The Russian fighter announced his retirement after defeating Justin Gaji in October, after which he repeatedly stated that he did not intend to change his mind.

However, the head of the promotion, Dana White, refused to believe in this, for less than five months trying to convince one of his main stars.

The functionary did a lot to make the champion stay, including putting the Russian at the top of the list of the best fighters regardless of weight category (P4P).

Then many were unhappy with this development of events, especially the former owner of the first line - the youngest champion in the history of the organization, John Jones.

Thus, the decision to remove Nurmagomedov from the ratings of the Absolute Fighting Championship can be considered evidence that the promotion has abandoned attempts to arrange the 30th fight in the Russian's career.

Apparently, during the last negotiations with the fighter, all the i's were dotted, as a result of which White and the company decided to move on.

As Khabib himself admitted, he had the opportunity to conduct so-called money fights, but this did not interest him.

It is worth noting that in the course of recent meetings, White hardly had a chance to make Nurmagomedov an offer that he could not refuse.

Dana could probably write Khabib a record fee in the history of mixed martial arts, but only if he agreed to fight with Conor McGregor again.

However, at UFC 247, he suffered a crushing defeat at the hands of Dustin Poirier and deprived the matchmakers of the opportunity to organize a long-awaited rematch in the near future.

For this to make sense, the Irishman needs to successfully complete the trilogy with the American, but this will not be possible until July.

It is possible that it was the potential return match between Nurmagomedov and McGregor that was the reason that the Russian remained in the UFC ratings for so long after retirement.

White paid tribute and reaffirmed interest in the Russian, while paving the way for revenge.

If Poirier was defeated, it could have been held in the summer.

In this case, the presence of Khabib in the table of ranks would not raise any questions from anyone.

One way or another, even now there is an opinion that Nurmagomedov is still able to resume his career.

It is assumed that he can follow the example of Georges Saint-Pierre and try to become a champion in two divisions in the future.

So, the Canadian was absent for almost four years and returned only at the moment when the middleweight title was held by Michael Bisping.

For most of his UFC career, the Englishman has alternated between victories and defeats and is more than an ordinary fighter against the background of his predecessors.

At the same time, he received a chance to compete for the belt as the fourth number in the rating and only because Chris Weidman was injured.

And that's not counting his highly controversial victory over Anderson Silva.

It is assumed that Nurmagomedov can take a break and return in the event that the title in the division up to 77 kg is held by a more convenient opponent.

At the moment, the title is held by Kamaru Usman, a battle with whom it seems unlikely.

First, many consider the Nigerian to be a less technical, but more athletic version of the Russian himself, as a result of which the battle can become an ordeal for the Eagle.

Secondly, the welterweight himself admitted that he would never fight with Khabib, as he treats him like a brother.

And this is not surprising, because both are Muslims, they communicate quite closely and cooperate with one manager - Ali Abdel-Aziz.

However, at the moment, Nurmagomedov intends to focus on leading his own promotion of the Eagle Fighting Championship and in parallel plans to engage in coaching activities.

As his former American Kickboxing Academy partner Luke Rockhold admitted, the ex-lightweight champion has expressed a desire to help him prepare for his return to the cage.

“Now he is trying on the role of a coach.

And so he presses on me, wants to coach.

He wants to play a significant role in my return.

It's pretty funny to see Khabib in this light.

He is aiming for the Coach of the Year title.

This is what he wants: to become the next great coach, to follow in his father's footsteps, to continue his work, "Rockhold confessed to TMZ.

In 2015, Rockhold was considered one of the strongest fighters in the UFC.

In December, he took over Weidman to become the middleweight champion, and also climbed to third in the P4P rankings.

However, in June he sensationally lost to Bisping by knockout, after which he won only one of the next three fights.

According to Rockhold, his next battle will take place at the end of the summer, which will give him enough time to work with Nurmagomedov.

However, there are a number of nuances.

The American has not been training in AKA for a long time, and the last camp was held in Sanford MMA and the RVCA center.

Plus, Luke's main problems lie in boxing, and in this aspect, Khabib is unlikely to be able to help him.

Unless it will force the American to change his style and use more wrestling qualities.

Collaboration with Rockhold can become a kind of test of the pen for Nurmagomedov, who plans to follow in his father's footsteps and become a great coach.

Of course, it is already possible to assess his influence on Islam Makhachev, the brothers Umar and Usman Nurmagomedov, but working with an experienced fighter is a completely different experience.

And if Khabib succeeds in reviving Luke's career, then this will be a serious achievement and will allow him to immediately be considered as one of the most promising specialists in the world of MMA.

In this case, Nurmagomedov will be able to count on working not only with young and promising fighters from Dagestan, but also with acting MMA stars.

Rockhold's example may inspire them to turn to him not only for a couple of lessons on wrestling, but also ask them to completely lead the training process.

As the president of the AMC Fight Nights promotion Kamil Hajiyev noted, the only problem may be in the high demands of Khabib.

The ex-lightweight champion will surely be strict about his charges and require them to meet their own high standards.

A number of athletes may have problems with this.