Doubles of Zabolotny from the game and Sobolev from the penalty spot, dissatisfaction with Karpin and Slutsky with the judges: the main events of the 23rd round of the RPL

Spartak and Sochi scored five goals each against Ural and Tambov, respectively. At the same time, Alexander Sobolev realized two penalties in the red-and-white squad, and the double of Anton Zabolotny helped the southerners to beat the opponent. Rostov also achieved a devastating victory in Volgograd, but the head coach of the yellow-blue Valery Karpin admitted that some of the referee's decisions were wrong. Rubin's mentor Leonid Slutsky also criticized the referee after the defeat to Khimki. About the main events of the 23rd round of the RPL - in the material RT. 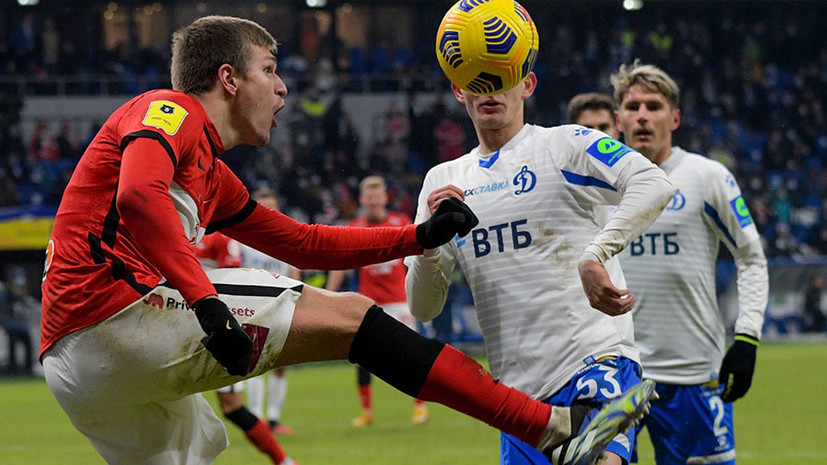 Controversial decisions of a judge in Volgograd

The previous round of the RPL was overshadowed by two referee scandals at once.

The 23rd round also did not go without them.

So, because of the referee's mistakes in the match against Khimki, Rostov threatened to boycott the game with Rotor.

As a result, the team still entered the Volgograd Arena field, and the referee Kirill Levnikov made several decisions in its favor at once.

To begin with, in the first minutes, due to a rather controversial offside position, Cedric Gogua's goal was canceled.

Next, the judge appointed an ambiguous penalty to the hosts' goal after the contact of the same Gogua with Ali Sow.

However, the victim himself did not convert the penalty spot.

But at the end of the first half, Armin Gigovich still opened the scoring and scored his debut goal for Rostov.

Levnikov, on the other hand, ignored the obvious hand play by Maxim Osipenko.

The blot was so obvious that even Valery Karpin admitted that his ward had broken the rules.

After the break, the demoralized "Rotor" missed three more times.

Another young Swede Pontus Almqvist scored his debut goal in the yellow-blue lineup.

Then Sow still hit someone else's goal and chalked up the third goal in four meetings for the team in the RPL.

Finally, Alexander Saplinov, who came on as a substitute, put an end to it, who spent the first half of the season on loan in Volgograd.

So "Rostov" interrupted a four-match losing streak in the championship, and the opponent filed a complaint with the FTC RFU about the work of Levnikov.

On Friday, it became known about the resignation of the head coach of Volgograd residents, Alexander Khatskevich.

Zenit won the most important away victory over CSKA in the central match of the round - 3: 2.

Even the goal of Jose Salomon Rondon in the middle of the first half did not embarrass the Petersburgers.

The striker, who returned to the national team, scored in the second RPL match in a row and brought the number of goals in the current season of the national championship to 13, which helped him catch up with teammate Serdar Azmun in the scorers race of the tournament.

True, at the end of the first half, the forward was already marked with a minus sign.

He missed his second consecutive penalty and third in the current Premier League season.

In the match of the 21st round with Rubin, Yuri Dyupin took Artyom's kick from the point.

This time Dziuba was outplayed by the experienced Igor Akinfeev.

In turn, he managed to set a new record for the national championship.

The opponents missed him 20 penalties in the national championship.

But after the break, Sergei Semak's wards still put the squeeze on the opponent.

The team's newcomer Wendel managed to issue a double, who had never scored for Zenit before.

It is also necessary to note Daler Kuzyaev, who gave two assists and earned a removal for Ilzat Akhmet.

At the end of the meeting, substitute Emil Bohinen managed to earn a penalty, which Nikola Vlašić confidently converted, but the army did not have enough time to recoup.

So "Zenith" won over CSKA for the third victory in a row.

Moreover, the red and blue in the last 16 matches with St. Petersburg in all tournaments only once turned out to be stronger.

Semak also does not spare the once native team, who beat it four times in the last five games with one draw.

In a parallel match, Akhmat and Arsenal faced off against Zenit and CSKA, respectively, at the weekend.

And if Grozny missed four unanswered goals, then the Tula sensationally beat the Muscovites.

However, they failed to extend the successful streak.

In the capital of the Chechen Republic, Dmitry Parfyonov's team did not look the best and conceded two unanswered goals.

At the 33rd minute, Andrei Semyonov, after playing a standard position from close range, ferried the ball into the net and opened the scoring.

And at the very beginning of the second half, Vladimir Ilyin closed the serve of Marat Bystrov from the right flank and scored the fifth goal in the current RPL season.

Thus, "Akhmat" managed to interrupt an eight-game losing streak in the Russian championship.

The last time the team won was on 7 November last year.

Then the charges of Andrey Talalaev turned out to be stronger than Tambov.

On Wednesday, they once again confirmed the status of an inconvenient opponent for Arsenal.

In the last five meetings, Akhmat turned out to be three times stronger than the opponent with two draws.

The most important goal of Krykhovyak in Ufa

The railroad workers won the fourth consecutive victory in the RPL and the fifth in all tournaments and climbed to third place in the national championship standings.

At the same time, the away game against Ufa turned out to be extremely difficult for the Muscovites.

Although they owned the ball 63% of the time, they barely passed the opponent's echeloned defense and rarely created dangerous moments.

In addition, at the end of the first half, due to an Achilles injury, Marko Nikolic had to change the captain of Vedran Corluk.

In a difficult moment, the team was helped by a standard position to score three points.

In the 80th minute, after a corner kick and Eder's discount, Grzegorz Krychowiak sent the ball into the net from close range and scored his fifth goal in the current RPL season.

Ufa, however, extended the losing streak in the championship to six meetings.

In this segment, the Bashkortostanians suffered five defeats and only once parted with their opponent in the world.

Even the return of Shamil Gazizov to the post of general director of the club did not help.

And Rashid Rakhimov lost to the former team for the 12th time in his career and for the fifth time in a row.

Three penalties in the Spartak match

In turn, the main pursuer of Zenit, Spartak, won the third consecutive victory in the RPL with a total score of 13: 3.

On Thursday, the red-whites left no chances for Ural - 5: 1.

This success is especially valuable, because Yekaterinburg residents have always been considered an unpleasant rival for Muscovites.

For example, they were not inferior to them on the road for three years.

This time, the hosts removed all questions about the outcome of the confrontation in the first half.

Jordan Larsson opened the scoring in the 12th minute.

Quincy Promes then scored the second goal after returning to Russia.

After the break, the guests managed to close the gap in the long run thanks to a precise shot from the penalty spot by Eric Bikfalvi, but Domenico Tedesco's charges quickly regained a comfortable score difference.

Also, with 12 balls, he came close to Azmun and Dziuba in the RPL scorers' race, who are ahead of him by only one effective hit.

Then Sobolev converted the second penalty and the third in the last two matches.

All in all, the striker has five goals in his games against Krasnodar, Dynamo and Ural.

The only fly in the ointment for the red and white were the injuries of two key midfielders Alex Kral and Roman Zobnin.

The first was replaced before the break, and the second - in the 67th minute.

Both will miss the next meetings of the national teams of the Czech Republic and Russia.

Strong-willed victory for Dynamo in Krasnodar

Dynamo quickly came to their senses after losing to Spartak in the derby and defeated Krasnodar on the road, which became the first strong-willed for the team in the current RPL season - 3: 2.

Moreover, at the beginning of the second half, when Yuri Gazinsky doubled the advantage of the southerners, few could believe in such an outcome.

It is noteworthy that the midfielder, who was not distinguished by high performance, scored a goal in the third match of the championship in a row.

Young footballers helped the blue and white to make a comeback.

Earlier, in February, he hit Spartak's goal in the Cup.

And 17-year-old Arsen Zakharyan gave an assist and scored a third point for performance in four Premier League games after the season resumed.

Thus, Dynamo won their third victory in the national championship in 2021 and took the sixth break for the national team matches.

On the contrary, Murad Musaev's charges are showing extremely weak results in the new year.

In seven matches in all tournaments, the team suffered five defeats with one draw and a victory over Tambov and dropped to the tenth line.

The best team in Russia in the last 15 matches

The fans were also looking forward to the Rubin - Khimki match with great interest, as both teams have recently gained a good move.

Kazan scored three victories in a row in the championship, and the Moscow Region team did not lose nine matches in the RPL.

It is difficult to say how the game could have turned out if it had not been for a penalty kick to the goal of Leonid Slutsky's team, which referee Alexei Matyunin appointed in the middle of the first half for a handball by George Despotovich.

Along the way, he repeated his personal performance record in the national championship.

The midfielder also scored six goals in the 2018/19 season with Arsenal.

And soon Pavel Mogilevets doubled the advantage of the guests.

Shortly before the break, Djordjevic corrected himself for a productive mistake and scored the 11th goal in the current RPL draw.

In the second half of the meeting, Rubin came close to recouping, but conceded instead.

Ilya Kukharchuk hit the gate of the former team just four minutes after entering the field.

Khimki have won eight wins and two draws in the last ten Premier League games, and have reduced the gap from the European Cup zone to five points.

Moreover, with 32 points Igor Cherevchenko's charges are the best team of the tournament according to the results of the last 15 rounds.

They are one point ahead of even Zenit.

14 conceded goals of "Tambov" in the new year

The main intrigue in Tambov's matches after the season resumes is how many goals the team will concede.

In the last round in the RPL, Vitaly Sychev, a pupil of Lokomotiv, made his debut at the last stage and conceded four goals from Krasnodar.

A few days later, it was the turn of 32-year-old Ukrainian Rodion Syamuk.

He coped with his task worse - five goals from Sochi.

At the same time, in the first half, the outsider looked no worse than his opponent and even created several dangerous moments at the gates of Nikolai Zabolotny.

However, in the second added minute, Sergei Pervushin's wards missed an offensive ball into the locker room from Anton Zabolotny and rained down.

After the break, the attacker managed to make a double.

Along the way, he set a personal performance record in the Russian championship with seven goals.

For the last two, these balls became their debut in the RPL.

Tambov lost the last four league matches with a total score of 1:14.