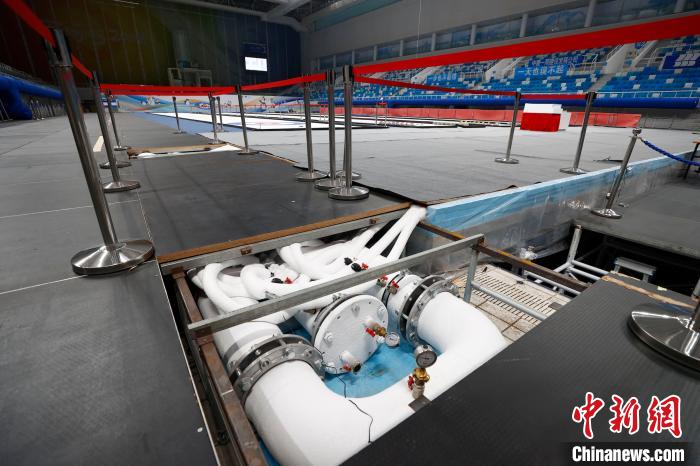 China News Service, Beijing, March 12 (Reporter Du Yan) In April this year, the Beijing competition of the "Meet in Beijing" series of winter sports events will be officially held.

At present, the major venues in the Olympic core area located in Chaoyang District, Beijing, are following the principles of "testing all tests, testing all tests" and "flexibly running games", preparing for battles in an orderly manner, focusing on testing the command system, facility flow lines, and epidemic prevention links. , Emergency response, etc., to ensure that the number of venues will not decrease, the standards will not drop, the epidemic prevention will not be loose, and the testing procedures will not be lost.

In April of this year, the "Meet in Beijing" series of winter sports events will be officially held in Beijing.

The picture shows the orderly preparations for the National Swimming Center.

From April 2nd to April 9th, men’s ice hockey and Paralympic ice hockey games will be held in the National Stadium, and 12 games are expected to be organized.

From April 7th to April 10th, a speed skating competition will be held at the National Speed ​​Skating Stadium, and 14 competitions are expected to be organized.

The above 5 test activities are expected to have a total of 86 games.

According to the relevant person in charge of the Beijing Chaoyang District Sports Bureau, in order to do a good job in organizing the Olympics and coordinate the integration of resources, the district has simultaneously established the 2022 Winter Olympics and Winter Paralympics Chaoyang District in accordance with the "dual operation, dual access, and dual services". The operation support headquarters, which consists of an office (command and dispatch center) and 10 working groups, 1 district operation support headquarters and 11 work agencies, composed of the "1+11" command and dispatch body system to plan and dispatch five test activities to ensure testing The preparation of the event was carried out in a standardized, orderly and efficient manner.

The three items of Olympic (Paralympic) family services, concierge and emergency are tested in the form of tabletop exercises to ensure that the number of games will not decrease, the standards will not drop, the epidemic prevention will not be loose, and the test links will not be lost.

"In this test competition, the National Speed ​​Skating Stadium will focus on testing competition organization and timing and scoring system, venue operation and command system, venue FOP ice surface and equipment, equipment and facility operation and guarantee, etc., involving venue management, venues and venues. There are 25 business areas including infrastructure, event services, technology, logistics, catering, and medical care.” According to the relevant person in charge of the National Speed ​​Skating Stadium, this is an important opportunity to better test the facilities of the venue and exercise the ability of the operation team.

Organizing events and preventing and controlling the epidemic

The National Speed ​​Skating Stadium "Ice Ribbon" is the only newly-built ice competition venue. It was completed at the end of last year. The first ice-making work was completed in January 2021. Various preparations have been made for ice-making in the April test event.

At present, the first ice-making test of the National Stadium has been completed, and the official ice-making will be launched soon.

The National Aquatics Center will promptly start the recruitment and construction of other temporary facilities such as power supply projects, barrier-free ramps, and technical integrated wiring.

Improve the closed-loop management measures of "key areas are fully enclosed, position personnel are not overlapped, and monitoring and elimination must be timely".

Chaoyang District, Beijing, will start the upgrade of the urban environment landscape in the core area of ​​the Olympics.

In key Olympic-related areas, in accordance with the "Overall Work Plan for Urban Environment Construction and Urban Operation in Chaoyang District for the Beijing Winter Olympics and Paralympics", the Chaoyang section of the "Five Districts, Four Lines and Three Peripherals" will be guaranteed for the Winter Olympic Games. The focus is to carry out comprehensive management of the city appearance and environment, centralized management of the "four major" orders, and strengthening of urban operation management.

In 2022, more people will love to watch and understand all competitions.