"Both lost": why the incident at the finish of the marathon with Bolshunov and the disqualification of Klebo upset the entire skiing world

Alexander Bolshunov cannot be considered the winner of the marathon at the World Ski Championships. This was stated by the 2010 Olympic champion Nikita Kryukov. According to him, everyone lost from the collision between Bolshunov and Johannes Klebo, but it would be wrong to award two gold medals. Former Canadian skier Devon Kroeshaw noted that the jury had a difficult decision to disqualify the Norwegian, and the Swede Matthias Fredriksson suggested that Klebo had no way to avoid a collision. 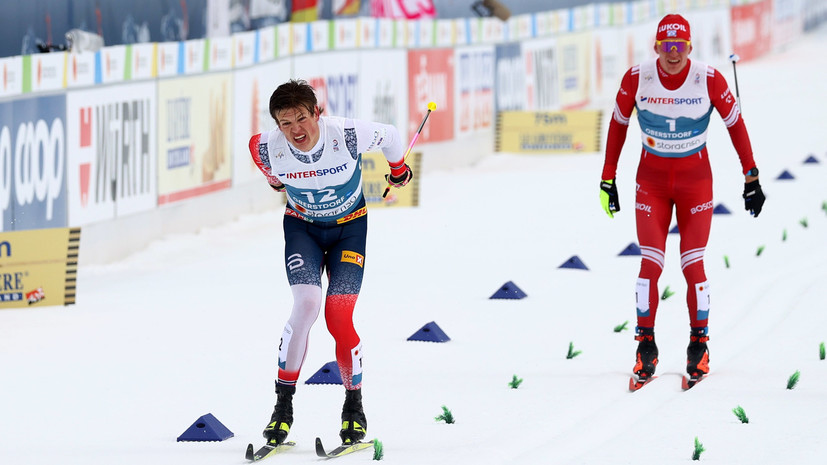 “I don’t think you should be punished for this”

The World Ski Championships left behind a bitter aftertaste due to the scandal that occurred at the finish of the men's marathon.

Despite the fact that the International Ski Federation (FIS) acted within the rules, disqualifying Johannes Klebo and giving silver to Alexander Bolshunov, most fans and experts were disappointed with this outcome.

In their opinion, both athletes equally deserve the championship title.

Thus, the 2011 world champion Devon Kershaw suggested how difficult this decision was made by the jury.

Most of the questions were raised by who was the first to enter the home stretch, which means who had an advantage when choosing a trajectory.

“Bolshunov was very well prepared for the race.

On the last ascent, he went first, realizing that Klebo should not be released.

Surely at the finish line, Alexander decided to work widely in order not to give his opponent the opportunity to stand wide in range ... But what should be considered first - the toe of the ski and the boot?

It seems to me that the Russian wanted to hinder the Norwegian more than to get ahead, ”Kersho summed up in the FasterSkier podcast.

Russian experts also noted the ambiguity of the incident.

Olympic champion Vancouver-2010 Nikita Kryukov stressed that in this situation it is impossible to name a champion.

“The proposal of Alexander Legkov to present two gold medals?

I am against two gold medals, a champion is a champion.

There is 50 km for this to determine the winner.

Two gold coins are neither for you nor for us, then you can give three gold ones.

But I agree that because of this situation, both lost.

In turn, Alexander Zavyalov recalled the situation at the 1982 World Cup, when the USSR national team was ahead of the Norwegians by a hundredth of a second.

After a lengthy consultation, the judges awarded the victory to both teams.

He emphasized that in both cases, the jury adhered to the rules, so you should not blame him for bias.

“And in the situation with Bolshunov, a disaster struck, first a collision, then the stick was broken.

People are now shouting that Sasha should have been awarded a gold medal too, but for what to present, I do not understand.

Now the hundredths have returned, whoever finished first is the champion.

And how can you award the victory to skiers who showed different times at the finish line? ”, - quotes Zavyalov TASS.

At the same time, hot controversy was caused not only by the distribution of medals, but also by the disqualification of Klebo.

Five-time Olympic champion Thomas Alsgård called the incident a scandal, since, in his opinion, there was no good reason for the suspension.

The former Swedish skier Matthias Fredriksson also agreed with him.

He noted that the Norwegian could not have acted otherwise at the finish line.

“Throughout the season, there were enough such moments, but for the first time a disqualification was issued.

What could Klebo do, where could he go?

He rode with Bolshunov, there was a struggle, both tried to maintain speed.

I don’t think that one should be punished for this, ”Fredriksson quotes“ Sport-Express ”with reference to SVT.

After the finish, a flurry of criticism fell on both skiers.

At the same time, there were many sympathizers.

The fans urged Bolshunov not to get upset, since he, in their opinion, is the real winner.

Warm words were also addressed to Klebo, including from the Russians.

Despite the confrontation between the two countries on the track, they expressed their respect for the opponent and thanked him for the fight.

"The race generated a lot of frustration and anger."

Meanwhile, the president of the Russian Cross-Country Skiing Federation (FLGR) Elena Vyalbe announced that the Norwegians have appealed the disqualification of Klebo.

This means that the fate of the marathon medals has not yet been finally decided.

The head coach of the Scandinavian national team, Eric Nossum, said that the joint was provoked not by his ward, but by the Russian.

According to him, for the sake of victory, he is ready to "create problems" for the rest of the race.

And sports director Espen Bjerwig explained why the team decided to challenge the jury's decision.

“Our position is as follows: Klebo walked along the inner radius at a higher speed than Bolshunov, and he did not interfere with the Russian in any way.

Bolshunov begins to "cut" along the inner radius to close the "door" in front of Johannes.

As a result, there is a joint.

We believe that Klebo did everything right, but the FIS still has a different point of view, ”explained Bjerwig.

Alexander himself did not agree with this accusation.

“I had no other choice.

It was the best solution - to go to the finish line along this trajectory, the only way I could pick up the required speed.

Therefore, I went this way, wanting to win, "- quotes Bolshunov" Sport-Express "with reference to Dagbladet.

At the same time, commentator Dmitry Guberniev urged the athlete's colleagues to speak more actively on this issue, who, unlike the Norwegians, preferred to remain silent.

“Unfortunately, the Russian position, above all of Bolshunov's partner racers, remained unknown.

Although the coaches spoke out boldly and willingly.

Dear skiers, I am sure that both the fans and Bolshunov would be pleased to hear from you words of support in the public field, ”Guberniev wrote in his Telegram channel.

Regardless of the FIS decision, it can be assumed that both athletes will have an unpleasant aftertaste from the 2021 World Cup for a long time.

Bolshunov could not hold back his tears after the finish, and Klebo admitted that it was the hardest day of his career.

“I have to be honest: today's race has generated a lot of frustration and anger.

I have been waiting for her for a very long time and with great impatience, she was my main goal this season.

I felt that I was completely ready for the race and was aiming for a high result.

I knew that I had a chance to win, ”Klebo wrote on Instagram.

It is worth noting, despite all the contradictions, the Russian expressed the hope that they would be able to maintain good relations.