She is a 100-year-old Olympic champion, escaped the Nazi genocide, and won the Olympic podium ten times.

Agnes celebrated its 100th birthday. Image source: IOC website.   How long is 100 years? For ágnes Keleti, "These 100 years are like 60 years."   Two months ago, Agnes-Keletti received a letter from Bach, President of the International Olympic Committee, and a necklace with five Olympic rings. When Agnes opened the letter, a bright smile appeared on her wrinkled face. The fireworks on the birthd 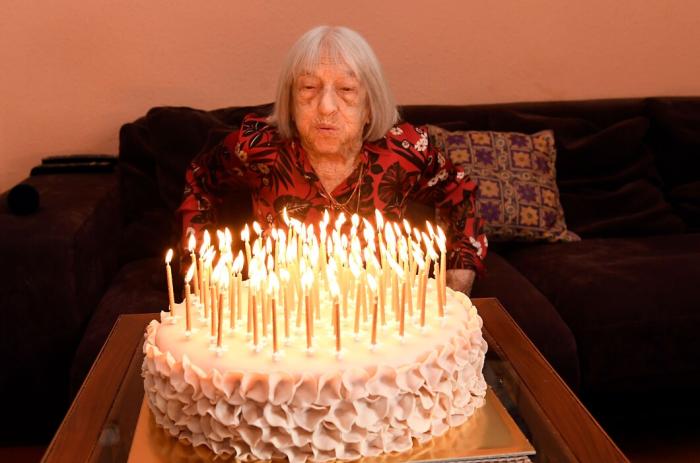 Two months ago, Agnes-Keletti received a letter from Bach, President of the International Olympic Committee, and a necklace with five Olympic rings.

When Agnes opened the letter, a bright smile appeared on her wrinkled face.

The fireworks on the birthday cake nearby made a hissing sound, and the faint light seemed to illuminate the whole of Budapest.

It happened to be Agnes’ 100th birthday, and Bacht sent her birthday wishes and paid tribute to her accomplishment and legendary gymnastics career.

This gray-haired, energetic old man is currently the oldest Olympic champion in the world.

She represented Hungary in two Olympic Games and won 10 Olympic medals, 5 of which were gold medals.

On the occasion of the 100th birthday, Agnes' new book "The Queen of Gymnastics: 100 Years of Agnes Keleti" was also published.

Agnes felt that the title of "Queen of Gymnastics" was inaccurate.

She laughed softly: "That's an exaggeration." After all, she was 31 years old when she won the first Olympic gold medal.

Agnes has an extraordinary talent for gymnastics.

Before she retired, Agnes had won 10 national championships and won this honor for 9 consecutive years.

For all athletes, the Olympic Games is undoubtedly the highest pursuit of their careers.

Agnes is no exception. She was selected to the Hungarian national team after she emerged in the domestic arena, and is expected to represent her motherland in the 1940 Olympic Games.

At that moment, Agnes’ Olympic dream was within reach.

But in that turbulent era, Agnes deeply felt that the tide of the times washed out the destiny of individuals.

With the outbreak of the Second World War, the Olympic Games, which should have been held in 1940, were forced to cancel.

And because Hungary joined the Axis powers headed by Nazi Germany, Agnes’ Jewish identity brought her even greater disaster.

She was first expelled from the national team and then banned from participating in gymnastics competitions.

For safety reasons, she hid in the countryside with her family, but ultimately failed to escape the fate of being arrested.

In 1944, German forces occupied Hungary and began the massacre of Jews.

That year, train after train filled with Jews drove towards Auschwitz.

The idea of ​​participating in the Olympics has long been forgotten by Agnes: "Alive is my most important goal."

Through a distant relative, Agnes used most of his savings to purchase the documents of a maid whose age was similar to her.

Since then, Agnes has a new identity: the Christian Piroska Juhasz.

Later, recalling this thrilling moment, Agnes said: "I really want to thank Piroska for being able to live forever. Not only did we exchange clothes and documents, I also imitated her way of talking about life."

Her mother and sister also survived with the help of the Swedish diplomat Raoul Wallenberg, but her father and other family members were sent to Auschwitz and never returned.

Agnes' new identity is not without suspicion.

Once in Budapest, Agnes was stopped by a guard who asked her to recite her identity information.

At this time, there is no room for mistakes, otherwise Agnes will also be killed.

Fortunately, the gymnastics competition has already given Agnes a calm heart.

She did not rush to say the identity information, and escaped again.

Agnes later found a job as a maid in the country to make ends meet.

But the war will pass one day, and her love for gymnastics has never disappeared.

In order to maintain a competitive state, Agnes will take time to run and exercise on the country roads, and will also use simple tools for training.

After the end of World War II, Agnes returned to the long-lost field of gymnastics. Her persistent efforts won her the qualification to participate in the 1948 London Olympics.

Agnes when he was young.

That year, she was 27 years old, and she was not young among gymnasts.

The delayed Olympic dream lingered in her mind. This time, she didn't want to miss it again.

But before the game, Agnes injured his ankle in training, and his trip to London was soaked up again.

Four years later, Agnes, who had fled the war, finally stood on the field of the Helsinki Olympics.

At the age of 31, she competed with girls who were a few years younger than her.

She cherishes this hard-won opportunity very much, and years of hard training exploded at that moment.

She swept the Olympic stadium and collected four medals, including a gold medal for free exercise.

Her name has been in the history of the Olympic movement from now on.

For any professional athlete, this achievement is admirable enough.

But Agnes’ legendary road has just taken the first step.

She once said: "I love gymnastics because gymnastics allows me to travel for free." This sentence sounds very good, but from another perspective, this is actually a true portrayal of Agnes being forced to stay away from home.

Agnes was on the podium.

Soon after the Melbourne Olympics, the situation in Hungary was turbulent, and Agnes chose to stay in Australia.

Later, she went to Israel to participate in the Maccabius Games and eventually settled in Israel.

There, the legendary female athlete met her husband, formed a small family, and had two lovely children.

After retiring, Agnes also served as the coach of the Israeli national team. She trained generations of gymnasts for Israel and passed on her precious spiritual wealth.

Until 6 years ago, Agnes returned to her homeland after 59 years. At the age of 94, she decided to return to her roots and enjoy her old age in her hometown of Budapest.

After getting older, Agnes' memory began to deteriorate, and she began to lose her memory temporarily.

But all the things she experienced when she was young could not be erased in her mind.

After years of ruthlessly ruining Agnes, she finally had a touch of tenderness for her.

Two years ago, she was still able to raise her legs and splits.

However, these dangerous actions were recently banned by nurses.

On his 100th birthday, Agnes said to the media: "I live well and healthy. I still love life." (Xing Rui)