Alexander Bolshunov had a fierce battle with four Norwegians for the gold. Into the riot, Bolshunov tried to close Johannes Hösflot Kläbo, who was driving off the Russian pole, and stormed to the gold. Emil Iversen followed up to a Norwegian double. - I keep my fingers crossed that I can keep the gold, says Kläbo. 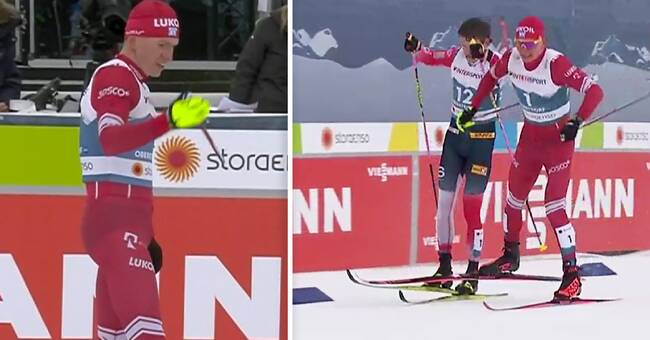 Bolshunov chose the corridor closest to the stands and Kläbo was trapped and refrained from staking for a couple of meters to be able to glide past.

- I choose to go on the side and he tried to push me out and I have to pass.

It is very sad that there was such an end.

I have been told that I am a world champion and it feels incredible even if I want an official confirmation.

It is a boy's dream to be able to win 50 km as a sprinter, says Kläbo after the fourth gold in Oberstdorf.

The TV production showed a feverish activity in the jury room.

It was a very dramatic race that was decided during the very last meters.

- It is a sad end to the race but I do not think the jury will do anything.

I do not see that Kläbo does something inappropriate without seeing it as a "race incident".

It is Bolshunov who pushes with the ski, says SVT Sports expert Anders Blomquist.

It was Kläbo's first strong gold in a five mile.

Jens Burman made a strong attempt to fight for the medals in the heavy five-mile race that ended the World Cup in Oberstdorf.

But in the last long uphill slope, the Swede did not have the strength and finished sixth.

At 23 kilometers, the 15 km winner Hans Christer Holund took the lead and Iivo Niskanen went up next to it and they had a little chat before increasing the speed, which until then had been very hesitant.

After that, Alexander Bolshunov really set the lead.

At 31 km, the cluster split when some chose to change skis.

Jens Burman and William Poromaa switched and lost 20 seconds in the lead where Bolshunov steamed on.

However, it was not long before the cluster was gathered again in an overcast Obertsdorf where it started to rain.

With just over a mile left, Burman led the entire competition with Niskanen and Johannes Hösflot Kläbo in tow.

Out on the last lap after 43.8 km, the following skiers were gathered: Emil Iversen, Kläbo, Holund, Bolshunov, Burman and Niskanen.