Fredriksson about the drama that decided the five miles: "Where will Kläbo go?"

Johannes Hösflot Kläbo was washed and deprived of the World Cup gold in the five miles after the sprint drama against Alexander Bolshunov. - They come in tight and want the wide curve to keep the speed. I think this is a "race incident". I do not think anyone should be punished, says SVT's expert Mathias Fredriksson. 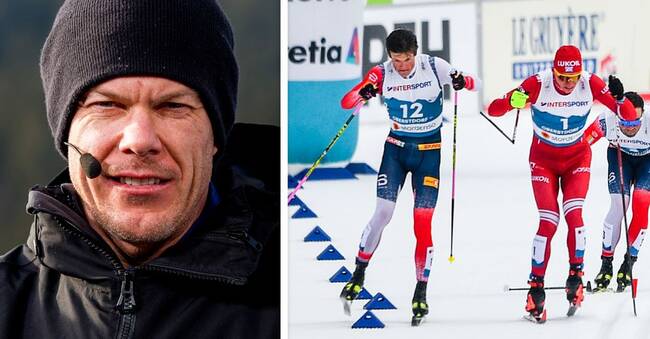 It was an incredibly dramatic end to the World Championships in Oberstdorf at the end of the men's five miles.

Johannes Hösflot Kläbo crossed the finish line first, but an hour later the Norwegian was deprived of the gold.

The jury considered that Kläbo pushed Alexander Bolshunov in an impermissible manner during the riot.

- I think there have been situations like this all winter, and then you are free.

That you change it now is strange, says SVT's expert Mathias Fredriksson in Vinterstudion.

- That's what happens, I do not know where Kläbo should go?

He tries to do as little as possible.

"He has no place"

Fredriksson believes that Kläbo comes with higher speed from behind into the riot and that the Russian makes a strange choice of track, when he does not go in more towards the middle.

- He may not be able to go in more towards a central track and the contact will be based on that - Kläbo probably thinks that he should choose a track more to the left.

He has no place, can go off the track and then the contact becomes.

- It is very reminiscent of the situation at the relay in Lahti where Bolshunov was the one who came from behind and was furious at Joni Mäki, it is quite similar - and then they got engaged.

Then I think you should be free here too.

The regulations in such situations have been discussed during the season and a meeting is planned where the rules will be clarified.

- You must not close or push another skier and the closer you get to the goal, the harder you have to be with this.

They come in tight here and want the wide curve to keep up the pace.

I think this is a "race incident".

I do not think anyone should be punished, says Fredriksson.

Expert colleague Johanna Ojala agrees that there have been several "worse" situations this season where they have been free.

- I want to know what the jury has said to Kläbo, I want to hear the reasoning.

Norway has appealed the jury's decision to dish up Kläbo.

Kläbo won World Cup gold in the five-mile race and comforted Bolshunov after the drama of the riot.