"Sasha was deprived of gold and the title of the king of skis": Russia supported Bolshunov after the scandalous finish in the marathon at the World Cup

The award of the silver medal and the emotional reaction after the finish of the marathon will make Alexander Bolshunov “greater” in the eyes of the whole world. This was stated by the commentator Dmitry Guberniev. At the same time, he agreed with the opinion that the Russian should have received gold on a par with Emil Iversen. Skier's coach Yuri Borodavko admitted that it was the worst day in his practice, and world champion Vasily Rochev stressed that the disqualification of the Norwegian Johannes Klebo would become an important precedent in the history of sports. 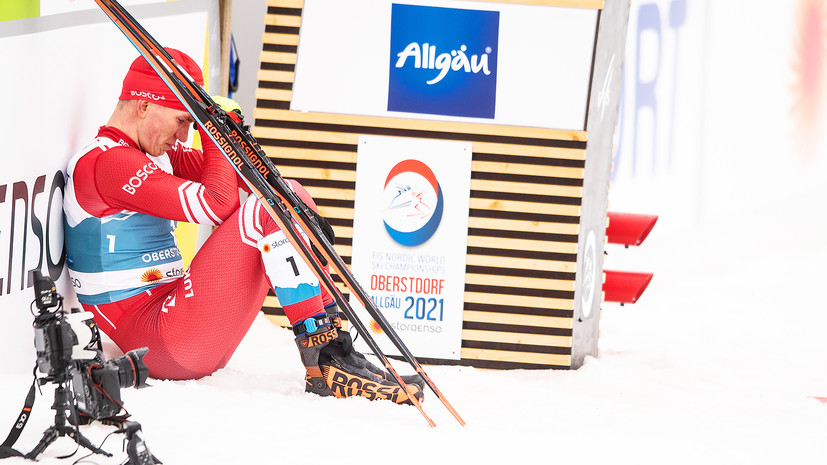 "Today, either I or Klebo should have been the winner."

The men's 50 m ski mass start at the World Championships in Oberstdorf ended with a scandal that will undoubtedly go down in the history of sports.

At the finish line, Alexander Bolshunov, who was walking first, touched his elbow with Johannes Klebo, who was trying to get around the Russian, as a result of which the domestic athlete broke a stick and not only lost the leading position, but also let Emil Iversen go ahead.

After a long trial and consideration of protests from both sides, the six-time world champion was disqualified, his colleague in the national team became the winner, and the Russian won the silver medal.

Despite the verdict of the jury of the International Ski Federation (FIS) in favor of Russia, Bolshunov himself was dissatisfied with the outcome of the marathon.

Initially, he reacted extremely emotionally to what had happened, after the finish he could not hold back his tears and did not want to go to the awards ceremony at all.

After the disqualification of the opponent, he still changed his mind, although he did not wear a silver medal on the podium.

😥 Bolshunov's emotions after the finish.

Fair ending of the situation?

“Today either I or Klebo should have been the winner, but definitely not Iversen.

I don't know why he was so happy at the awards ceremony, but he is generally a kind of athlete.

The disqualification of Johannes did not satisfy me at all.

I don’t know what decision would suit me, ”complained Bolshunov on the air of Match TV.

The marathon was also important for the Russian because in case of victory it could bring the unofficial, but no less honorable title of the king of skis.

It is received by the athlete who managed to win the races of 30 and 50 km in the same world championship or the Olympics.

“This is the worst day in my competitive practice, because they took the gold from Sasha and actually took away the title of the king of skis.

It's just, I don't even know how to say it, bad fate ... The judges made the right decision to disqualify Klebo, but Iversen now won, while Sasha couldn't become the world champion because of a broken stick, "RIA Novosti quotes Borodavko.

In turn, another representative of the coaching staff of the Russian national team, Yegor Sorin, told how the decision was made to punish Klebo.

According to him, the teams took turns telling their vision of the situation.

The Norwegian also had the opportunity to speak out, but was eventually found guilty.

It is necessary to ask the experts ... It is clear that for Alexander this is a weak consolation, since he always fights for the first place.

But at least it is good that our protest was accepted, which means that this will not happen in the future, ”Sorin said.

"Two gold would solve the problem"

There was indeed an opinion among experts that the most fair outcome would be the presentation of two gold medals - to Bolshunov and Iversen.

“It will be fair to give two gold medals.

It is clear that Bolshunov no longer fought when Iversen overtook him.

Give the gold medal to Alexander!

Today he did everything for this ", - quotes the champion of Sochi-2014 Alexander Legkov" Championship ".

In his opinion, Klebo deserved punishment, because, trying to overtake an opponent, he chose the wrong lineout, while Bolshunov acted in accordance with the rules.

“Two golds would solve the problem.

And to take the gold from Klebo and not put Sasha in the first place, I think, is unfair.

) did not participate in this showdown in any way, there was no struggle.

Iversen had to be left in his place.

But Sasha had a champion race.

I do not see any other scenario, "Sport-Express quotes Petukhov.

Sergei Kryanin, a member of the Presidium of the Russian Ski Racing Federation (FLGR), also expressed confidence that Bolshunov should have received gold, since he missed it solely through the fault of Klebo.

“In any case, even after Klebo's disqualification, Sasha lost his medal today.

Lost due to the fact that Klebo prevented him.

Bolshunov fought for gold, he could have won it if the finish went according to the rules.

All the same, there was a residue from this incident.

It would be fair if they gave two gold medals to Iversen and Bolshunov, ”Kryanin said.

However, not everyone agrees with this position.

Three-time world champion Anfisa Reztsova noted that the FIS did the right thing, not following the lead of the Norwegian national team, but it would be unfair to give the gold to Bolshunov, since Iversen “clearly and honestly won his award”.

“Of course, it's a shame to give the gold in the range, but Bolshunov is wrong.

He takes it so close to his heart: he doesn't wear a medal, he hangs his head, he doesn't congratulate his rivals.

Arrogance does not suit him - he is wrong.

It happened, it happens.

Well, Klebo prevented you, he was punished, why do you continue to behave like that?

At the moment, the situation is correct, ”said Reztsova.

FLGR President Elena Vyalbe explained that in this situation it was not worth counting on two golds.

“I think the rules need to be changed.

But at least for the first time in our life, they actually made a decision in our favor.

I think maybe it will be a little lesson for Klebo, although he is unlikely to be very upset.

Well stop, no one will give any two gold.

FIS will never agree to this, ”said Vyalbe.

At the same time, the 2005 world champion Vasily Rochev emphasized the importance of the FIS decision.

He admitted that he did not believe in a positive outcome of the proceedings, as he was used to the fact that the Norwegians were "treated like sacred cows."

“If everything remains as it is, it will be a very loud precedent in the world of skiing, I don’t remember that, to be honest.

So that the jury did this with the Norwegians.

Sasha Bolshunov said that only we are being judged, and that has always been the case.

This is an indicator that the FIS is making the right decisions ... Norwegian, Finn or Russian - no double standards, ”said Rochev.

After the incident, Bolshunov was supported not only by colleagues, but also by numerous fans, as well as representatives of other sports.

“If a meeting immediately began, it means that everyone had doubts about this incident, including the international federation.

We hope that the final decision is still fair.

But the fact that he is a champion for us is without a doubt!

Bolshunov is our champion! "

And commentator Dmitry Guberniev suggested how the attitude towards the Russian would change after the incident, and recalled another scandal with his participation in the relay at the World Cup in Lahti.

Then the athlete waved his stick away from Yoni Mäki, who cut him off.

The domestic team was disqualified, and Alexander was forced to pass a probationary period.

“Bolshunov is a hero.

Silver and tears make him greater in the eyes of the whole world than if he had won.

A good precedent has been created, we are sorry for Klebo, but he violated.

Now we look differently at the situation with the Finn, which was a few weeks ago.

I also agree that justice did not fully prevail, two gold could have been given.

Iversen should not have been the first under any circumstances, but this is what happened, ”Guberniev said.

It is worth noting that the scandal is unlikely to end there, since the Norwegian side did not agree with the disqualification of Klebo and intends to protest it.

She has the right to appeal to FIS within 48 hours.

Sports 2021-03-07T21:36:28.427Z
"Sasha was deprived of gold and the title of the king of skis": Russia supported Bolshunov after the scandalous finish in the marathon at the World Cup
Sports 2021-03-08T08:46:44.110Z
"He defended his honor and the honor of Russia": Chepalova about Bolshunov's tears, his rivalry with Klebo and four medals at the World Cup
News/Politics 2021-02-28T10:37:34.229Z
Alexander Bolshunov's fiancé broke into tears - shed an emotional speech about his loved one's rage
ADS
Sports 2021-02-27T21:15:33.815Z
"I have never seen anything like it in terms of drama": how Bolshunov's victory at the World Cup in cross-country skiing became a holiday for Russia
News/Politics 2021-03-07T19:55:35.765Z
Russia chews on World Cup skiing - world champion rejoiced: "Norwegians were finally treated like anyone else"
Sports 2021-03-06T18:56:11.318Z
"They can start to slow down Sasha": Zavyalov about the provocations of the Norwegians, Bolshunov's fatigue and the peculiarities of the marathon
News/Politics 2021-03-23T16:03:29.989Z
Bolshunov and Mäki uproar in Russia - ex-star declared scandal affected the most talked about ski winter
Sports 2021-03-15T09:23:18.891Z
"His name will forever remain in history": Bessmertnykh about Bolshunov's victory in the overall KM standings and the fight between Stupak and Yohaug
Sports 2021-01-24T18:12:33.522Z
"If they do not answer, they will humiliate Russia": how the world of cross-country skiing reacted to the conflict between Myaki and Bolshunov