Frida Karlsson in pain sprinted to the bronze 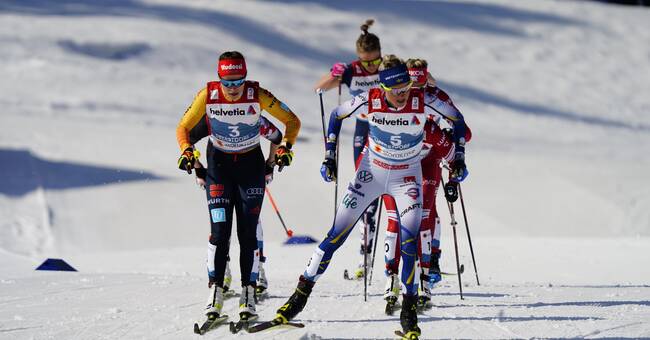 At the last corner towards the sprint hill, Heidi Weng slipped past Ebba Andersson and Frida Karlsson through a clever maneuver and then went hard on the hill, which gave a sufficient gap.

After the finish, Karlsson shouted out his pain and showed a clear bump on his arm.

Leaders were allowed to lead away the Swede.

There was great drama during the race.

At around a mile left, Karlsson, Andersson and Weng fell in a steep descent after they tangled in each other and Teresa Stadlober got a big gap.

It was Andersson who fell first and dragged the others with him.

In the first half after the fall, Teresa Stadlober had a gap of 21 seconds.

With one lap left, 6 km, the trio from the fall had chased in the race Stadlober.

- There have been too many such incidents with the Swedish girls.

We saw it in Ruka and we saw it in the skiathlon in the WC with Frida Karlsson, says SVT Sports expert Anders Blomquist.

Behind the fleeing Therese Johaug, a cluster of silver and bronze made up for the three miles.

At the ski change after 18 km, Teresa Stadlober, Heidi Weng, Frida Karlsson and Ebba Andersson, who messed up a bit, collected 1.50 after Johaug.