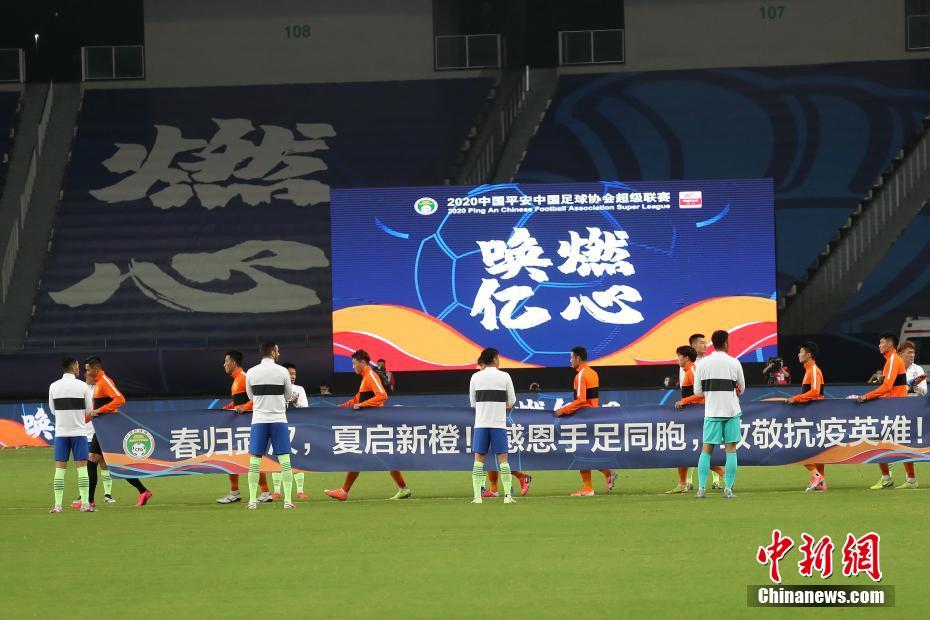 Data map: The opening ceremony of the Chinese Super League in the 2020 season.

The reason is that the Chinese Super League has received a total of 4 billion yuan in copyright fees in the past few seasons, but due to various factors last year, the copyright owner did not pay according to the agreement.

Before the Spring Festival, the Chinese Super League received only 150 million yuan in copyright fees, which is far from the expected annual average of 1.1 billion yuan.

And breaking this sky-high price contract was a chain reaction.

According to media reports, PP Sports, which enjoys the broadcasting rights of the Chinese Super League, was affected by difficulties in the operation of its parent company Suning Group. There were problems in the payment of broadcasting cooperation fees to Sports Power, which became the fuse of the current situation.

After being cut off by investor Suning, the 2020 Super League champion Jiangsu team is in a state of suspension.

At that time, Sports Power defeated the five-star sports with a bid price of 4.3 billion yuan, the 4 billion yuan Zhongshi Sports and the 1.75 billion Guangdong Radio and Television Station.

You know, before 2015, the copyright price of the Super League was only about 80 million yuan per year.

In fact, before today's copyright contract is facing the collapse of the sky-high price contract, the Chinese Super League copyright has shrunk.

In 2018, Tiao Power and China Super League extended the copyright contract to 10 years, and the price was changed from 8 billion yuan in 5 years to 11 billion yuan in 10 years.

At that time, the reason given by Sports Power was that the U23 and foreign aid adjustment fee policy of the Football Association affected the viewing value and market value of the Super League.

Now, due to multiple factors such as the adoption of the game system and the operation of broadcasters in the 2020 season, the copyright of the Super League has returned to its original point.

This is mainly due to the fact that individual teams have encountered access problems, in addition to the impact of access and international competition schedules, the Chinese Super League’s new season schedule has not been determined.

Of course, the extremely deserted transfer market is more or less also a major factor in the extension of the transfer window.

According to data from the German transfer market website, the current total transfer spending of the Super Winter Window is 23.81 million euros, a record low in the past ten years.

This comparison is more intuitive: in the 2017 season of the Jinyuan era, the Super League team invested a total of 403 million euros in the winter window.

At present, the 2021 Super League winter window transfer market standard is the Colombian foreign aid Quintero introduced by Shenzhen Football Club. The transfer fee is 5.9 million euros. Compared with the foreign aid that was often tens of millions of euros in the Jinyuan era, it is also huge to the naked eye. gap.

And big-name foreign aids such as Longdong, Hulk, Ighalo, Salavi, Pellet and other tens of millions of euros, and world coaches such as Benitez are also leaving the Super League in this window.

Domestic player transactions are also deserted. Except for the transfer of Shanghai Seaport defender Shi Ke to Shandong Taishan, and the introduction of young players such as Gao Tianyi and Cao Yongjing from Guoan, there are not many representative transactions.

Data map: Guangzhou Evergrande was crowned the eighth champion of the Chinese Super League in the 2019 season.

Is it good or bad?

Compared with the lively scene of the Jin Yuan era in the past few years, Chinese football today does have the meaning of "people go to the cold".

However, whether it is a substantial reduction in copyrights or a cold transfer market, it is a normal phenomenon of returning to rationality in the post-Jinyuan era.

After all, top-ranking teams in the Super League like Guangzhou have faced losses of nearly 2 billion a year.

One year, more than one billion yuan of PP sports is spent for the broadcast rights of the Super League. Even if there are advertisements and membership income, it is only a drop in the bucket.

This kind of business ecology is absolutely impossible to continue.

The huge investment of flooding in the Jin and Yuan era did not bring the expected development and progress to all aspects of Chinese football. On the contrary, they lost themselves in a false prosperity, and even some civilian teams that were originally "too small". Was completely swallowed by the wave of gold dollars.

To a certain extent, it is not entirely a bad thing that Chinese football has become tighter.

After losing the blood transfusion of investors regardless of the cost, the Chinese football, which has been cut off, needs to find ways to open up sources and expand the audience.

In the final analysis, professional football is an industry, and it is not much different from public entertainment products such as concerts, movies, and cross talks. After all, consumers need to pay for it.

Only by developing football into an industry can Chinese football have a way out and hope.