Ruthless sparring: why Bolshunov's defeat at the finish of the relay is not a cause for grief

With his victory over Alexander Bolshunov at the finish line of the men's relay of the World Cup in Oberstdorf, six-time world champion Johannes Klebo did everything to make the domestic athlete crave revenge. RT explains why the defeat of the Russian national team in this race is not a cause for grief. 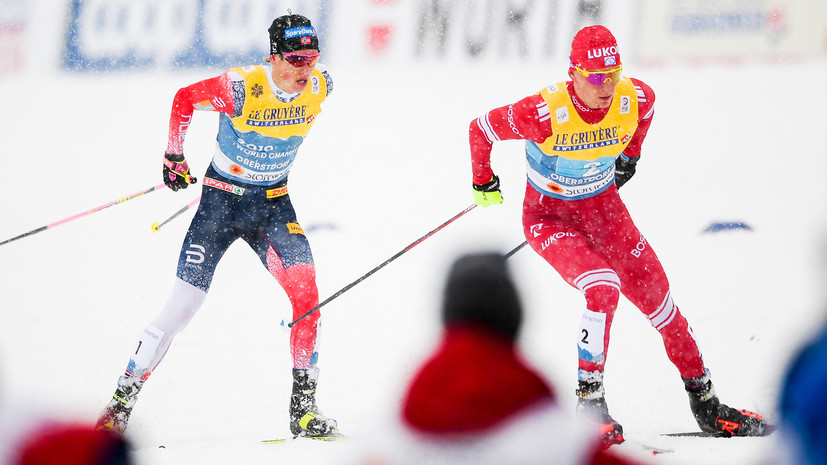 Twenty-odd years ago, when the three-time Olympic champion Alexander Karelin reigned undividedly in Greco-Roman wrestling, I once asked him why he treats some rivals so carefully?

He does not throw them with his signature "reverse belt", a terrifying and very spectacular technique, after which the outcome of the fight, as a rule, becomes a foregone conclusion, but simply puts the person on his shoulder blades, as if saving his own and others' time.

“So after all, the wrestler's code, which in Soviet times hung in all wrestling halls, has not been canceled.

And in this code it is written in black and white: “If the opponent is weaker than you, you must finish the fight as quickly as possible so as not to humiliate him,” the interlocutor answered me quite seriously.

Johannes Klebo clearly did not read that code.

From the very first meters of the final stage, when the Norwegian took over the baton from Hans Christer Holunn and walked imposingly along the track, demonstratively admiring the snow-covered surroundings, it became clear that “just a victory” on that day would not satisfy him at all.

He thirsted not so much for the blood of Alexander Bolshunov, as for his public humiliation: to give the Russian an opportunity to get closer to him, play cat and mouse with him for a while, and then tear, destroy, smear along the track at the finish.

Such a scenario was, as they say, written on Klebo's forehead in capital letters.

That is why it became especially creepy to watch how the distance between two outstanding skiers was rapidly decreasing: it is unlikely that at that moment there was at least one spectator at the stadium and at the screens who did not understand what would follow next.

Could Alexander have avoided such a humiliating reprisal?

It just required a number of conditions that the Russian team did not have that day.

To better ski with Ivan Yakimushkin, so that Artyom Maltsev had enough strength for the last lap.

So that Sergei Ustyugov would stay in Oberstdorf for the sake of the relay and would be able, despite the sudden injury that occurred, to replace one of these two and at least slightly ease Bolshunov's relay cross - to fight for gold, knowing that he could not be reached at any time. what kind of situation.

After all, Sasha probably understood what and how would happen in the last meters of this race, which was not finished, but he had already lost.

He briefly commented on his performance: “Klebo is not the athlete who can be dropped by 10 km, all the more starting 30 seconds behind.

On the descents and on the ascent, he felt very good.

The great Tatyana Tarasova once put the whole essence of the struggle for the highest title into one single phrase.

“You climb to the top higher and higher, and then suddenly the air around you ends.

But we must continue to climb.

This is not a pretty formulation or an exaggeration.

In the men's relay, we all had the opportunity to see the price of success with our own eyes, when Alexey Chervotkin, having passed the baton to Yakimushkin, writhed in the snow and vomited from overstrain.

This turned out to be the cost of 56 seconds of advantage over Norway in the first stage.

If it were not for this picture imprinted on the brain, one could safely declare the silver won by the Russian four as a precious trophy and not worry at all about how many seconds Klebo played against Bolshunov at the finish line.

Now, nostalgically recalling that our country has not won the relay races at the world championships for almost 40 years, it is difficult to drive the thought out of my head: maybe it's not just your own readiness and readiness of skis, but whether you are ready for the sake of victory the impossible?

This is in no way a reproach to Bolshunov: in Oberstdorf, Sasha has already accomplished the impossible, winning the skiathlon.

And the very fact that the athlete went through all the starts of the world championship without exception, having done everything he was capable of in each race, deserves tremendous respect.

As for Klebo, I would venture to suggest that in his person the Russian leader may have received the greatest gift in his sporting destiny - an incredibly powerful annoying factor.

Probably, Alexander could afford to build his career in such a way that once again he did not intersect with the Norwegian at all - leaving Johannes the opportunity to mow the sprint clearing, and focus on longer distances himself, taking his own right there, without wasting extra nerves and at the same time saving energy.

This option seemed to be quite working, but only before the relay race, which Klebo turned not so much into a victorious as into a merciless spectacle.

That's why I want revenge.

I want it desperately, and I don't think that Bolshunov himself has any other feelings about this.

Therefore, I want to believe that Sasha will someday put an end to the history of his relationship with Johannes himself.

And he will do it as impressively as the Norwegian - in the relay finish of Oberstdorf.