"I want to try something interesting": Nurmagomedov on the desire to play for Spartak and friendship with Ronaldo and Ibrahimovic

Khabib Nurmagomedov became bored in mixed martial arts, and therefore he decided to try himself in professional football. The UFC champion said this in an interview with the famous blogger Yevgeny Savin. According to the fighter, he wants to play a match for his father's favorite team, Spartak. Also, the native of Dagestan spoke about his friendship with Cristiano Ronaldo, turned on a motivational voice message from Zlatan Ibrahimovich, which helped him defeat Justin Gaethje, and spoke about meeting on the field with the team of Conor McGregor. 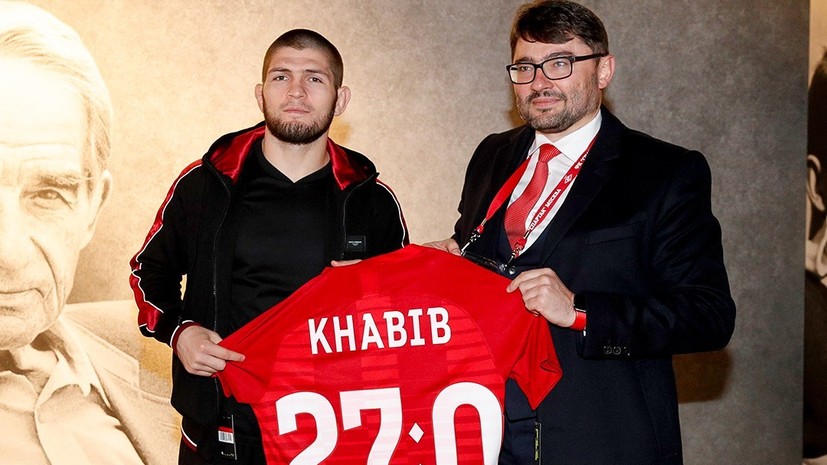 The club's press service reported about the visit of the UFC champion Khabib Nurmagomedov and the famous blogger Yevgeny Savin to the location of Spartak at the training camp in Dubai at the end of January.

At the same time, the fighter intrigued his subscribers with a post in which he wrote that he was preparing for his "debut" in professional football.

Nurmagmedov took part in a training match with Savin and several Spartak players.

Midfielders Oston Urunov, who has already transferred to Ufa on loan, and Zelimkhan Bakaev, were included in the “Khabib's team”.

The blogger Ayaz Guliyev, Giorgi Jikia and the former midfielder of the red-and-white Jano Ananidze were included in the "team of football players".

As a result, the meeting ended with the victory of Nurmagomedov's team - 5: 4.

Moreover, the fighter himself opened the score with a tight blow to the far corner.

During the second half, the players were leading 4: 2, but conceded three goals in a row and lost.

Even Jikia's double and Ananidze's goal did not help them achieve at least a draw.

Bakaev scored twice as part of the opponent.

He also chalked up the winning ball from the penalty spot.

Moreover, the goalkeeper parried Zelimkhan's blow from the “point”, but the projectile ricocheted into the net from his hands.

The losing team, according to the agreement, purchased T-shirts for the winners.

And on Wednesday, almost a month and a half after the match, a video was released on the Krasava Youtube channel in which the UFC lightweight champion spoke about his love for football, his possible debut at a professional level and friendship with the stars of this sport.

Khabib admitted that after he announced his desire to try himself in football, he received offers from three clubs at once - Emirati Al-Wasla, Turkish Fenerbahce and Italian Milan, where he was invited by Zlatan Ibrahimovic himself.

But he himself dreams of entering the field in the form of "Spartak", for which his father Abdulmanap Nurmagomedov supported.

“I want to try something interesting.

In MMA, I already got bored ... This is a national team.

And my father would like me to play for Spartak.

To do this, I need at least six months of football training.

Also, I would have lost six kilograms.

I will not call myself a super football player, but there is a desire to try, ”the fighter explained.

It's no secret that Khabib loves football since childhood and regularly watches it on TV.

So this time, he admitted that he was trying not to miss the matches of Russian teams in European competitions.

Spartak is one of my favorite teams in Russia.

In general, in domestic football I support a good game.

I want the matches to be interesting and the competition to grow.

Every time our players play in European competitions, I watch almost all the meetings, I worry.

I would like our football to be in the top 8, ”Nurmagomedov added.

At the same time, many fans can envy the knowledge of the UFC champion.

He easily listed the names of the stars of the 90s and lamented that in our time there are not so many charismatic players.

He compared himself with the legendary Brazilian striker Ronaldo, two-time world champion.

As it turned out, they happened to meet in 2015, and the paths of the athletes are very similar.

“I then received a severe knee injury, then a year later - another.

I saw him just a couple of months after the operation.

Then he said to the Brazilian: “You returned to the ranks after breaking the“ crosses ”and became the world champion.

God willing, I will achieve this too.

He looked at me in surprise and asked how I know the history of his injuries.

He replied that I remember everything about his career: where and when he played, how much he scored, where he went.

Ronaldo said that he had not yet seen fighters who are so well versed in football, ”Khabib recalled.

For example, a native of Dagestan has repeatedly talked about his friendship with Cristiano Ronaldo.

He remembered one conversation with a Portuguese that made him think.

“When we met, we had a discussion with him about where to get motivation.

Cristiano wants his son to surpass him, but worries that he will not cope.

Indeed, at his age, Ronaldo dreamed of boots, while the boy has everything ... Hunger moves a person.

I liked this example.

I realized that such a person would never be content with one, two, three titles.

He has already scored the most goals in history.

At least two or three seasons will still bomb Cristiano, ”the fighter is sure.

When the blogger suggested that Habib rank the Portuguese, Lionel Messi and Ibrahimovic in terms of skill level, he put Ronaldo in first place, Argentinean in second and Swede in third.

It turned out that the UFC champion also communicates with the Milan striker and is in regular correspondence.

In particular, the Russian turned on a voice message that the footballer recorded for him a couple of hours before the fight with Justin Gaethje in October last year.

“People do not see how I work, they see how I play, and they are surprised how much I have everything under control.

I believe in hard work and that it always bears fruit.

Then you just have to do it.

When you are number one, people always want to hurt you in some way.

But we prove over and over again who we are and what we are made of.

Nothing comes just like that, hard work pays off.

Everything is the same with you: you crush others because you work, and not because it was given to you from above or you are lucky.

No, no, no - this is because you are you, ”Ibrahimovic instructed his friend.

This voicemail from the striker Khabib called one of the best psychological speeches he has ever heard.

According to Nurmagomedov, Zlatan's words really motivated him to fight Gatji, which he eventually won in the second round.

Not without a question about Conor Macregor.

Khabib plays in one of Dagestan's amateur leagues, while Notorius sponsors a modest Irish club.

When asked if, in theory, their teams could meet, the Russian noted that Ireland can hardly boast of football traditions.

“I have never seen them play anywhere.

You can only remember Robbie Keane.

There will be too much attention for McGregor's team.

And this is how we move at the local level in the Dagestan league, "Nurmagomedov noted.