Replacement for Alonso and a check for the future: why Alpine signed Kvyat as a reserve pilot

Daniil Kvyat returned to Formula 1 as a reserve pilot for the Alpine team. He will replace Fernando Alonso or Esteban Ocon, if for some reason they are unable to start. In the past, the Spaniard had to be replaced several times due to health problems. The Russian rider can also be considered by the team as the main pilot when the Frenchman's contract expires. 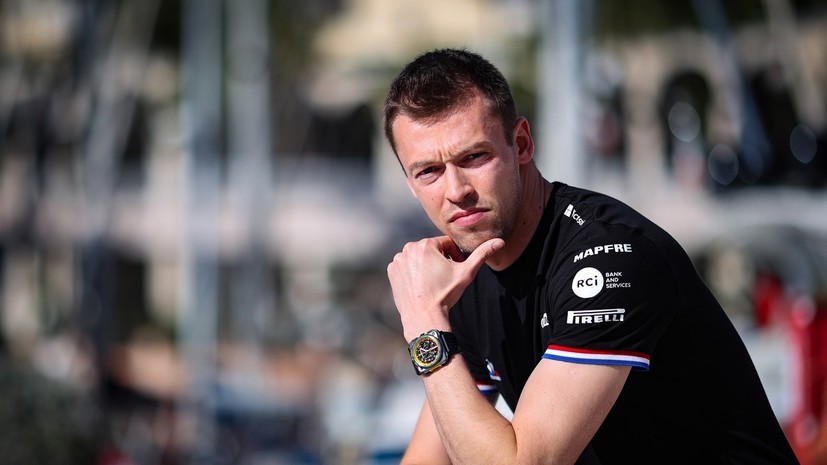 In the new season of Formula 1, fans will still have a chance to see two Russian pilots on the grid at once.

Daniil Kvyat will continue his career in the French team Alpine, created on the basis of Renault.

He will be the reserve pilot and will sit behind the wheel of the car if Fernando Alonso or Esteban Okon need to be replaced.

Also, the 26-year-old pilot will be able to take part in free practices if the team deems it necessary.

This turn in Kvyat's career was quite unexpected.

At the end of 2020, the Russian left AlphaTauri and said goodbye to Formula 1.

He was replaced by the debutant of the royal races, Yucca Tsunoda.

In other teams, there was no place for a pilot who participated in six world championships.

Kvyat himself admitted that he would return to the most prestigious auto racing series only in 2022, but not earlier.

Kvyat also did not intend to compete in other championships in 2021, or at least did not inform reporters about such plans.

At the same time, in January, he posted a video from a workout in which he strengthened the muscles of the cervical spine - for professional racers, this is an important part of physical fitness.

Fans could take this as a hint that the Russian is not going to rest in the new year.

And only on March 2, on the day of the presentation of Alpine, there was information that Kvyat would become its third pilot.

The "stable" created on the basis of Renault will become the fourth team in the Russian's career after Toro Rosso, Red Bull and AlphaTauri.

“I am delighted to be joining the Alpine family in Formula 1.

In the last year, the team has achieved excellent results and is very advanced technically.

It is seriously developing, and I aim to make my contribution so that this positive trend continues.

I will try to use my experience on and off the track to help develop the A521 and future cars.

The reserve pilot has to keep fit, so I look forward to being able to integrate into the team in several different areas, ”Kvyat said after signing the contract.

Alpine CEO Laurent Rossi described the best side of the Russian racer.

He noted that Kvyat in his skill corresponds to the main pilots of the team.

“Over the course of his career, Kvyat has earned a reputation for being a very fast driver and has shown excellent stamina.

We are delighted to welcome another aspiring and talented driver into our ranks for the debut season of Formula 1 as Alpine, ”said Rossi.

Just like last season, the role of the reserve driver in Formula 1 will be of particular importance in the new one, which starts on March 26 with the combined races at the Bahrain Grand Prix.

Due to the coronavirus pandemic, pilots still run the risk of withdrawing from the races at any time due to a positive test.

In 2020, for this reason, Sergio Perez, Lance Stroll and Lewis Hamilton missed the starts.

A year ago, Sergey Sirotkin was the reserve driver of Renault, but he was not included in the updated team.

Compared to him, Kvyat is a much more experienced and titled driver, so it is not surprising that Alpine decided to strengthen the position of reserve pilot when a worthy candidate appeared.

Romain Grosjean, Kevin Magnussen, or Nico Hulkenberg, who has already come out three times as a substitute, could also claim the place of Kvyat, who were left without work in Formula 1, but the French stable preferred the Russian.

Alpine cannot attract any of their young pilots as reservists - they do not have the super license necessary to drive the car.

Of course, the signing of the contract does not give Kvyat guarantees that he will be able to take part in at least one Grand Prix.

Most commands do not use this option.

But in the case of Kvyat, his chances of getting to the start can still be estimated slightly higher than if he was in another team.

Coincidentally, before the coronavirus pandemic, it was Alonso, who resumed his career in Formula 1 this season, who most often needed a replacement.

In 2015, he was unable to compete at the Australian Grand Prix due to a concussion, the next season he was not allowed to the Bahrain Grand Prix due to the consequences of a recent accident, and a year later he refused to participate in the Monaco Grand Prix in order to compete in the Indianapolis 500. Now the 39-year-old Spaniard is the second oldest F1 driver behind Kimi Raikkonen, and this is also a factor that Alpine must have taken into account when looking for a decent replacement.

Interestingly, until recently, Fernando might really need to be replaced in the first races of the season.

On February 11, he was hit by a car while walking on a bicycle, as a result of the accident, the Spaniard had a broken upper jaw, and he needed surgery.

Then the team said that Alonso will have time to recover by the beginning of the championship, and at the presentation of the team they confirmed that the replacement of the pilot is not needed yet.

For Kvyat himself, cooperation with Alpine is also necessary, but not only in order to have the theoretical opportunity to perform once or twice a season and be on the same starting grid with the combat pilots of other teams. In order to return to Formula 1 in 2022, it is extremely important for him not to lose touch with her and have access to the inner cuisine of royal races. Kvyat will be in full view of the team, whose contract with Esteban Okon will end this year. The Frenchman even in the last season risked leaving the racing series due to poor results and now again has to prove that he can continue to drive the car when next to him is a more experienced Russian.