Therese Johaug made the race of her life when she won 10 km free yesterday with 54 seconds. Her time had given 30th place at the men's intermediate time in today's 15 km. She was, among other things, ahead of the Swedish riders Karl-Johan Westberg and Björn Sandström. - It is remarkable in every way, says SVT Sports expert Anders Blomquist. 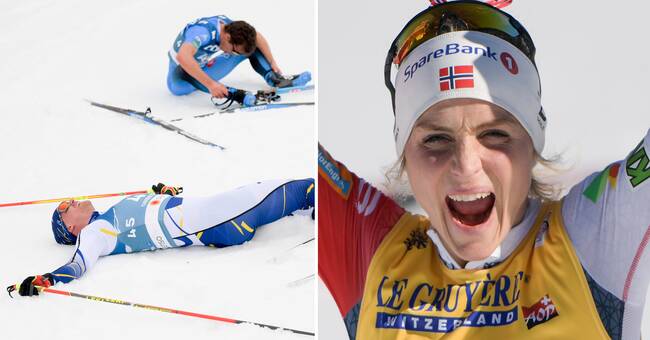 Blomquist emphasizes that you can not compare right because it differs in before and how to set up your races because there were different distances on different days.

- But this comparison still says quite a lot.

She did an incomparable race and was brutally good, says Blomquist.

Johaug's time had been enough for 30th place, even though the men then had one lap left to go.

- In every sequence I saw Johaug, there was not a step where she did not push, says Blomquist.

Holund saved for a sharp finish

Today's winner Christer Holund was fastest even to the pass after 10457 meters.

- Here I think that Holund had deliberately saved himself, he was the one who went the fastest lap, and this comparison is not to his advantage.

He showed that he had more to give during the last lap, says Blomquist.

Johaug was ahead of the two Swedish riders Karl-Johan Westberg who had 23.19.9 and Björn Sandström who had 23.28.2.