Shabab Al-Ahly qualified for the final of the Arabian Gulf Cup after defeating Al Wasl by three goals against one goal yesterday, at Rashid Stadium in Dubai, in the second leg of the semi-final, to meet «Dubai Knights» with the winning victory over Kalba on penalties, in the final on April 6, next. Repeat to face the two teams b 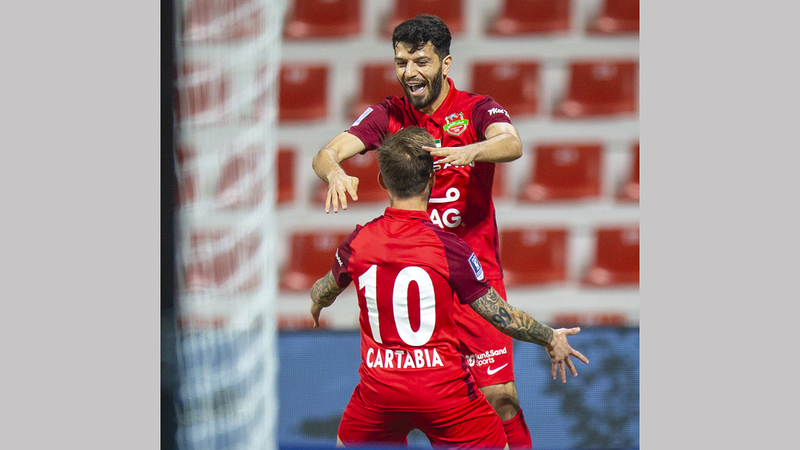 Shabab Al-Ahly qualified for the final of the Arabian Gulf Cup after defeating Al Wasl by three goals against one goal yesterday, at Rashid Stadium in Dubai, in the second leg of the semi-final, to meet «Dubai Knights» with the winning victory over Kalba on penalties, in the final on April 6, next. A repeat of the confrontation between the two teams in the previous version, during which "Al-Ameed" beat two goals to one goal, and it will be the second final that brings the two teams together this season, after each of them qualified for the President's Cup final, while Al-Ahly youth won the Super title to become the cup titles in the current season confined to The two teams.

Shabab Al-Ahly presented a strong match and confirmed their superiority over Al Wasl, after winning the first leg with two goals without a response.

Shabab Al-Ahly scored the first goal of an organized attack led by the Uzbek Masharibov, who played a cross, and Argentine Kartabia met with his head in the net (11).

On the other hand, the "emperor" entered the atmosphere of the meeting after 20 minutes and got more than a free kick, while the most dangerous chance was a ball that reached Abdul Rahman Ali inside the penalty area and hit a missile ball that was deftly blocked by Majid Nasser and took it to a corner kick (24).

As for the second half, he witnessed a strong start from Al-Ahly youth, and Cartabia decided to qualify, when he received a beautiful pass from Eduardo and skillfully shot it into the goal (52), and in the 63rd minute, Jess scored the third when Masharipov played a corner kick and Jesus met it with his head in the net, while Al Wasl got a kick A penalty from which Lima scored the first goal (71), and Ali Salmeen received a red card (85), to end the match with the victory of Shabab Al-Ahly and qualifying it for the final.

In the second match, Al-Nasr won, it qualified after defeating Ittihad Kalba with a penalty shootout (7-6), and after the semi-final second leg match ended 2-1 in favor of Al-Nassr, so that the two teams were equal in the outcome of the two matches, after Kalba won the first leg with the same result.

The match was launched strongly by Kalba through the attack of Togolese Malaba, who penetrated the ball into the penalty spot, but he hit a weak ball towards Al-Nasr goalkeeper Ahmed Champé (9).

The first threat to victory was after a shot by Antonio Caravallio from outside the penalty spot, which was removed by Kalba goalkeeper Jamal Abdullah (18).

The first goal of victory came through a direct free kick by Ryan Mendes, who completed a ball bounced off the crossbar after a shot by Diaa Sabaa, to be deposited by Mendes into the goal (39).

Diaa Sabaa returned and scored the second goal after a left-wing missile strike from a distance (45).

Kalba got a penalty kick after the Dutchman Henrikost was defeated by Malaba and scored the reduction goal (82), and Mariani missed the equalizer after he hit his ball from a free kick directly into the arms of the goalkeeper (85), to end the match with a score of (2-1), and the two teams resorted. For penalties.

In the kicks, he scored for Kalba, the Togolese Malaba, the Dutch Henrikost, Sultan Adel, Majid Rashid and Omar al-Khadim, while the Swiss lost Mariani and Fahd Sabil.

On the other hand, the Portuguese scored Touzeh, the Frenchman Mendez, the Argentine Tigali, Mahmoud Khamis, the Brazilian Lima, Jacob Hassan Al Balushi, the Brazilian Oliveira, and lost Diaa Sabaa from the side of the victory.

Shabab Al-Ahly and Al-Nasr qualified at the expense of Al Wasl and Kalba ... and this is the second final between them, after the President's Cup.