RT has compiled a consolidated rating of the ten strongest domestic fighters, regardless of weight categories, which will be published monthly. Who made the company to Khabib Nurmagomedov and Pyotr Yan in the top three, where is Alexander Volkov and which of the PFL athletes made it to the top - in the March issue of the ranking. 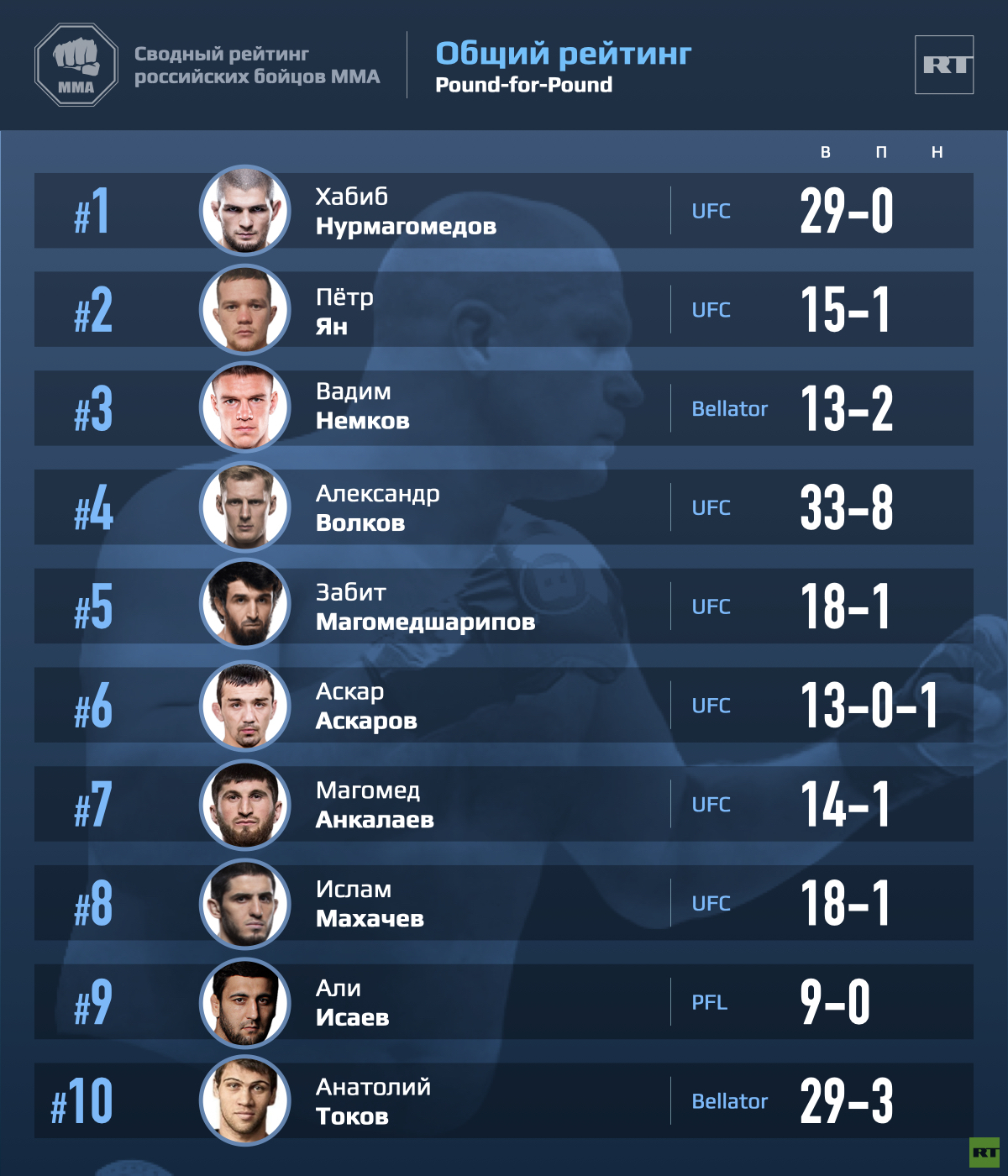 In recent years, mixed martial arts have strengthened their status as one of the most popular sports in Russia, and Russian fighters have earned worldwide recognition.

Khabib Nurmagomedov holds the UFC lightweight title and is considered the strongest fighter in the world, regardless of weight category.

In addition to Orel, several other athletes from the Russian Federation right now hold titles in the largest MMA promotions on the planet and occupy a place in the elite of mixed martial arts.

At the same time, Russian fighters have an even more obvious advantage in various local promotions, despite the serious competition from eminent foreigners.

In this regard, RT compiled a national rating of fighters, which presents the best representatives of mixed martial arts, both regardless of weight categories (pound for pound), and in each of the eight weights.

When it was drawn up, sporting achievements were put at the head - in particular, the won belts and tournaments, successful performances in the largest organizations and victories over the strongest rivals.

The list of the best MMA representatives of the country will be published once a month and will change based on the latest results.

Successful performance will help the athlete rise, while failure and prolonged downtime will contribute to his decline and, possibly, loss of place in the top.

At the same time, significant progress or regression at each time interval will be explained in detail.

At the top of the ranking is the current holder of the title of the Absolute Fighting Championship in lightweight.

In October, Khabib Nurmagomedov forced the formidable striker Justin Gatji to surrender and repeated the division's record for the number of belt defenses.

True, immediately after the end of the fight, he announced his retirement, thanks to which he questioned not only his place in the UFC top.

Nevertheless, at the moment, Nurmagomedov continues not only to hold the championship belt, but also to remain at the head of the organization's P4P rating.

Despite the fact that he himself denies the possibility of returning to the cage, Dana White does not intend to just let go of his star and plans to hold the next stage of negotiations.

The first took place ahead of UFC 257, in which Conor McGregor fought Dustin Poirier in the main fight.

It was expected that the Irishman would deal with his opponent and thereby achieve the organization of a revenge with the Russian, but this did not happen.

If Nurmagomedov nevertheless refuses White's offer and confirms his intention to leave the sport, another UFC champion may take his place at the top of the RT rankings.

His accomplishments seem more modest compared to Khabib, but he has the potential to at least come close to Eagle's stellar status in the future.

He will be able to take another step next weekend when he makes his first title defense against Aljamein Sterling at UFC 259.

Although he is not a champion in the largest MMA promotion on the planet, he managed to defeat several top fighters.

Among them, ex-champions Phil Davis and Ryan Bader, who have previously successfully played in the UFC, and in the current conditions are quite capable of fighting for the trophy of the organization, stand out.

In the career of Peter Yan, there was only one opponent of this level - Aldo.

Yuraya Faber - although a legend of martial arts, but at the age of 40 only vaguely resembled himself, and John Dodson represented the maximum danger in the lightest category.

In this regard, in the near future, Nemkov may, if not squeeze Yan, then impose serious competition on him.

If he again copes with Davis, and then takes the upper hand twice more before the end of the year and becomes the winner of the Grand Prix in light heavyweight, then he is quite capable of bypassing Peter.

Outside the troika, there are fighters who have a chance soon, if not to win championship titles, then to join the race for the belt.

First of all, we are talking about Alexander Volkov, who effectively knocked out the legendary Alistair Overeem in early February.

This allowed him to at least qualify for participation in the "eliminator".

At the same time, Volkov's manager believes that Drago is already able to obtain the status of the first division number.

In place of Alexander Volkov, Zabit Magomedsharipov, who has long been considered one of the main featherweight stars of the UFC, could well have been in the ranking.

At the moment, he has 14 victories in a row, six of which were won under the auspices of the championship.

And if not for a number of circumstances, such as a pandemic and injuries to opponents, the Russian could well either own a trophy or have experience fighting for it.

Flyweight Askar Askarov also ranks third in his division, but at the same time he is inferior to Magomedsharipov in the consolidated rating.

The reason is not the highest competition in the category up to 56.7 kilograms and the absence of victories over the stars.

For comparison, in order to rise to the elite of the division, it was enough for him to draw one fight and win twice.

To achieve a similar result, Zabit needed to achieve success six times in a row, and in an especially striking manner.

His track record already includes two awards for "Performance" and "Fight of the evening", as well as the prize for "Best painful hold of 2018".

Below in the ranking are two fighters with the potential to become the strongest in their divisions.

Islam Makhachev is considered by many to be the future star and potential replacement of Nurmagomedov at the head of the lightweight category, and Magomed Ankalaev is one of the most promising representatives of the light heavyweight category.

And although both are not yet in the top 10 of the strongest according to the UFC in their weights, they surpass many of their more famous competitors.

If we were guided solely by a series of victories and status, then Makhachev would probably have bypassed Ankalaev.

But, unlike the lightweight, the heavyweight fighter remained active even during the pandemic and entered the octagon twice in 2020.

And both times he achieved early victories, knocking out Ion Kutselaba.

As a result, a slight advantage over the compatriot.

As for Ali Isaev and Anatoly Tokov, both could be slightly higher in the rating.

The former is the winner of the PFL Heavyweight Grand Prix, and the latter may soon qualify for the Bellator middleweight title.

However, both cannot boast of either meeting with stellar opponents or performing in the last year.

The pandemic shocked both promotions and forced them to seriously adjust their plans, which hit the athletes.