Sudden death of the Chinese Super League champion: After the Jin Yuan, how many survivors are left in Chinese football?

It is raining in Nanjing, which is the home stadium of the Jiangsu team. At this time, a cold announcement was issued, which seemed very appropriate: "With immediate effect, Jiangsu Football Club ceases operations of its teams."   The Jiangsu team, which escaped the 15th of the first lunar month, failed to escape the "critical illness notice" issued on the deadline for admission to the Super L 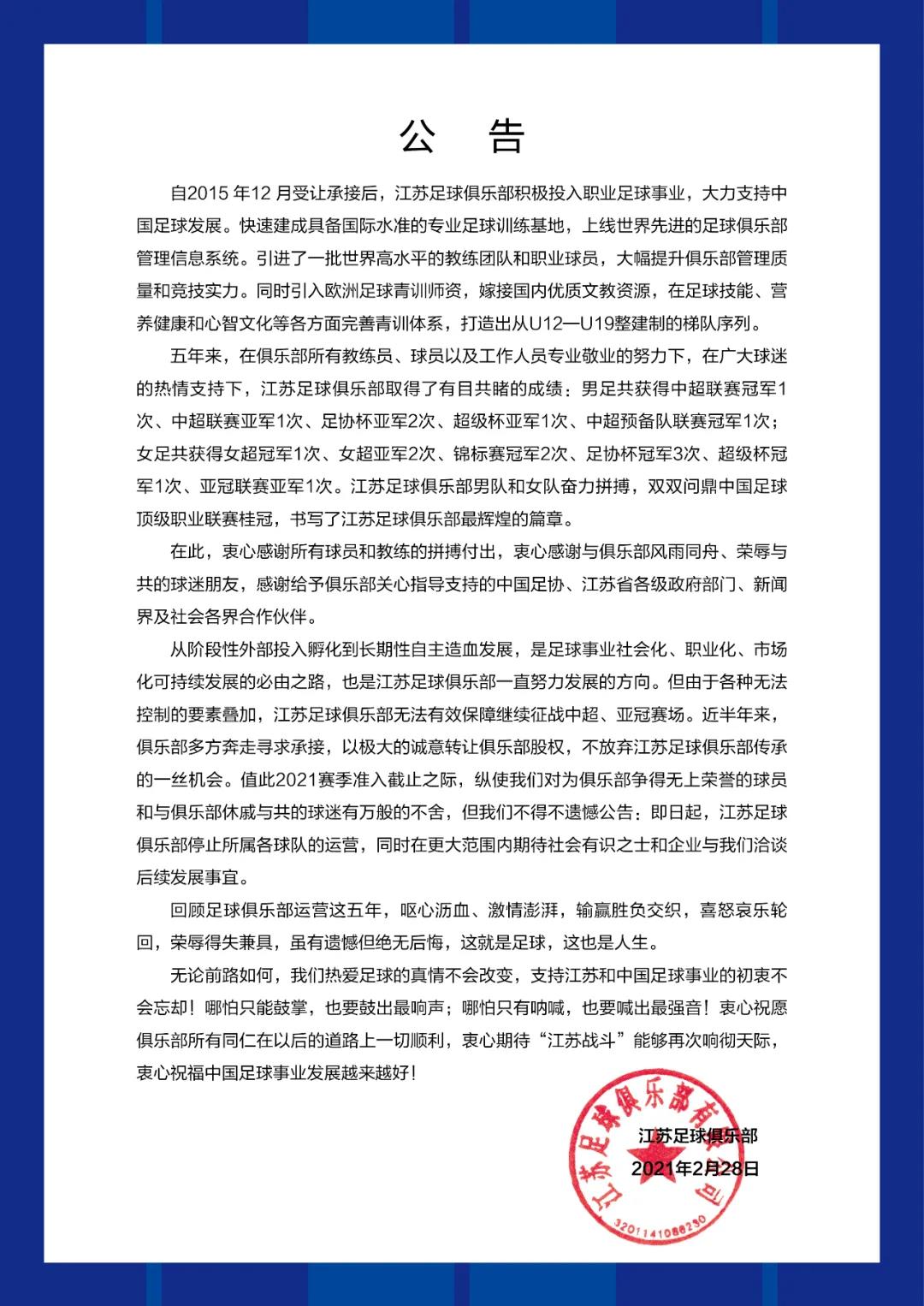 It is raining in Nanjing, which is the home stadium of the Jiangsu team.

At this time, a cold announcement was issued, which seemed very appropriate:

The Jiangsu team, which escaped the 15th of the first lunar month, failed to escape the "critical illness notice" issued on the deadline for admission to the Super League in the new season-the defending champion of the Super League, which was cut off by investor Suning, is dying and waiting for the final judgment of fate .

"The championship is not an end, but a new beginning."

That was the pinnacle of Jiangsu football. On the evening of November 12, 2020, in front of tens of thousands of fans in Suzhou Olympic Sports, Jiangsu team defeated Guangzhou team 2:1, won the first Chinese Super League championship trophy in team history, and became the top professional football league in China. The ninth championship team.

Jiangsu has been looking forward to this championship trophy for too long. It has been a long time since Wu Xi, the captain of the championship, raised the trophy excitedly before completing the awarding process.

At that moment, it was slightly funny and extremely beautiful.

I have to say that this beauty originated from the Jin Yuan era.

Before and after the Guangzhou team won the AFC Champions for the second time in 2015, a group of investors including Suning, SIPG, China Fortune Land Development, Quanjian and other investors entered the stadium one after another and wanted to replicate Evergrande’s achievements.

The golden dollar era of Chinese football has begun to reach its peak.

In the 2020 Super League finals, Teixeira scored a crucial goal.

"Aspiring to be the champion of the Super League in three years, and be on top of Asia in five years."

That was Suning's first season in the Jiangsu team.

By winning the FA Cup in the 2015 season, with the Yuwei who won the first top domestic championship in team history in 57 years, and the funds provided by Suning Group, Jiangsu team spent more than 100 million euros in the 2016 winter window to sign Brazilian stars. Ramirez, Teixeira and other strong support, the momentary scenery is unlimited.

In the following years, the Jiangsu team also signed the famous coach Capello, Colombian international R Ma and other big hands, but under the strong team of Guangzhou and many Jinyuan teams, the Jiangsu team has been unable to complete the set goals.

Until the 2020 season, in the Chinese Super League, which is relatively more fortuitous, the Jiangsu team, which occupies the right time, the right place, and the people, has sung to become the champion.

However, this beauty is too short-lived.

From the peak to the darkest moment, only 108 days have passed...

Destroying this beauty is also the golden dollar.

In the case of long-term struggling to make ends meet, the huge salary burden made the Jiangsu team breathless.

Companies that intend to offer assistance are also discouraged in the face of high investment costs.

The addition of the two announcements has already announced the fate of the Jiangsu team to some extent.

This veteran team established in 1958 may disappear in 2021.

In the face of this cruel situation, in addition to the unacceptable Jiangsu fans, perhaps most people have long been numb.

From last year's 16 teams withdrawing from domestic professional football, and now the Jiangsu team has entered a state of dying, it is the result of helpless and embarrassing results at the point where the Jinyuan football bubble burst.

Apart from the "defending champion" label, the Jiangsu team is essentially no different. They are all victims of the deformity of the fittest after the burst of the gold dollar bubble.

With the arrival of the admission node of the Football Association, the "Jiangsu Team" in the near-death state just opened the prelude to another wave of withdrawal.

One after another "Jiangsu teams" will follow in the footsteps of Liaozu and Tianhai and be buried in the dust of history.

Chinese football, which cannot solve the problem of open source, will continue to have a similar situation.

In the 27-year professional Chinese Football League, how many survivors will be left under the double attack of flooding and making ends meet after the ebb and flow of the Jinyuan era?