Feyenoord is 1-2 thanks to Alkmaar blunder

Hello and welcome to our live blog! We will keep you informed of all Eredivisie duels this Sunday here. Eredivisie Four games LIVE: AZ-Feyenoord 1-2 Results: Sparta-Willem II 0-2 PSV-Ajax 1-1 Groningen-Fortuna 1-0 AZ-Feyenoord · in 2 days 32 'Feyenoord has things well organized in the first half hour in Alkmaar. Dick Advocaat's team keeps the spaces small when AZ has the ball and in possession 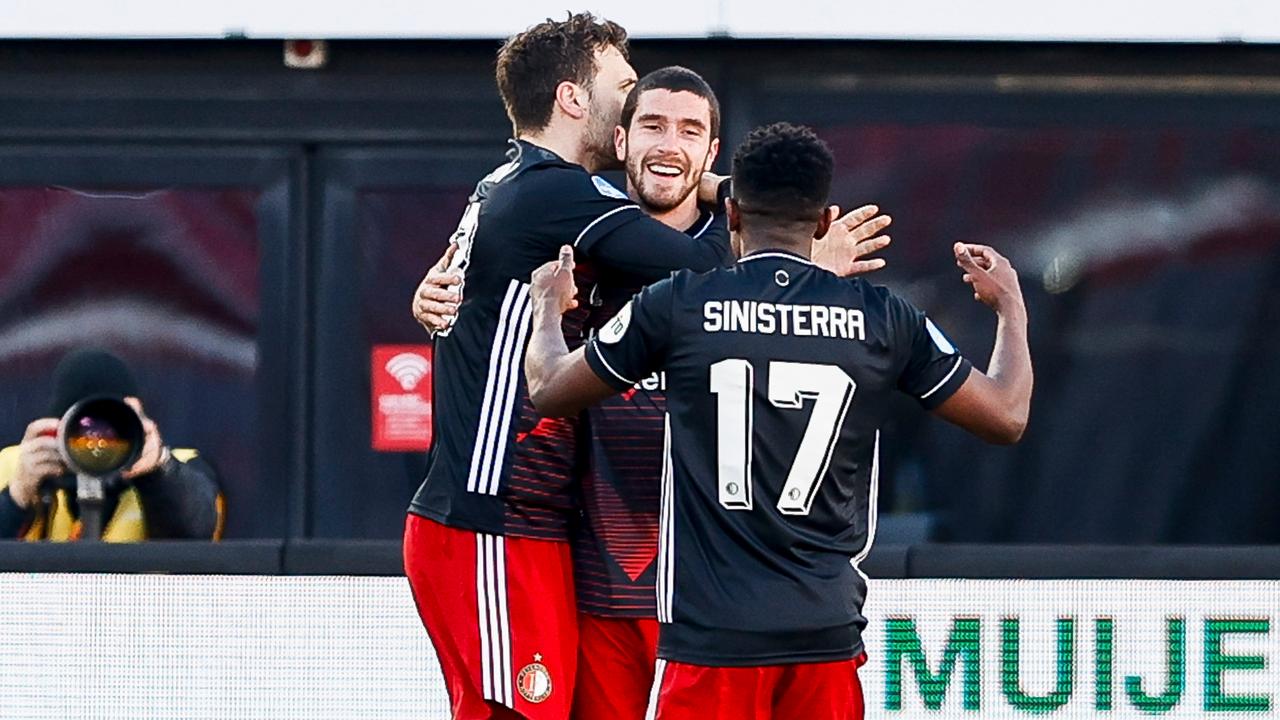 Hello and welcome to our live blog!

We will keep you informed of all Eredivisie duels this Sunday here.

32 'Feyenoord has things well organized in the first half hour in Alkmaar.

Dick Advocaat's team keeps the spaces small when AZ has the ball and in possession the team often finds the free man in midfield.

For the lead, it needed the help of Martins Indi and Bizot.

29 'Shot by Stengs, but an easy job for Bijlow.

What a curious goal!

After a long ball from Senesi, Martins Indi wants to return the ball to Bizot, but he had just left his goal to catch that same long ball.

The goalkeeper can no longer recover and Sinisterra taps in.

Feyenoord takes the lead for the second time.

The moment when the ball disappears from Myron Boadu's foot.

The attacker also scored twice in De Kuip and now he has outsmarted the defenders of Feyenoord.

Out of nowhere AZ comes to the same level.

Sinisterra does not pass Koopmeiners and in the counterattack Stengs sends Boadu away.

The striker lashes out once and through Senesi's heel the ball falls exactly into the corner, out of reach of Bijlow.

20 'Good attack by Feyenoord, which is concluded with a shot from Luis Sinisterra.

Bizot has great difficulty with that, but manages to turn the shot.

Ajax coach Erik ten Hag is critical about the performance of his team.

"The first fifteen minutes was actually the only part of the game where football was good," he says in front of the

"If we had scored then it might have been easier, but that didn't work out and the emotions got the better of the rest of the game."

If the captain of Feyenoord also scores himself, he equals the number 10 on the eternal top scorers list in the Eredivisie of Feyenoord.

Berghuis is now still 65 hits, one less than André Hoekstra (66).

Tadic about Dumfries: 'I am more experienced than Dumfries'

Dusan Tadic also has to cool down after the match against PSV.

"I received a penalty and saw three PSV players destroy the dot just before that," he describes the moment just before his used penalty kick.

"Dumfries also called me a 'pussy', so after the penalty you want to react to that. He wanted to play a mind game with me, but that is not wise and it was not wise of him, because I have a lot more experience."

11 'A lot is happening in the opening phase.

In the following counter Gudmundsson becomes dangerous, but again he does not take the ball well.

An exciting start in the AFAS Stadium provides the visitors with the opening goal!

After a short corner, Steven Berghuis throws the ball at the far post, where Marcos Senesi heads the ball in via Marco Bizot.

6 'Eric Botteghin suffers dangerous ball loss in the back and that creates a chance for Albert Gudmundsson.

However, the Icelander also plays the ball too far ahead of him and Bijlow throws himself on the ball.

Strongly cut by the Feyenoord player.

Blind: 'Happy with one point'

Daley Blind acknowledges after the game with PSV that the game of the team from Amsterdam was not very good.

Nevertheless, he is very happy with one point, so that the difference with PSV in the ranking remains six points.

"We also know that the game is getting much better, but if you score so late you should be happy with a point," he says in front of the

"We play back too much or lose the ball, so we have to work on that.

3 'There is the first danger of Feyenoord.

Jens Toornstra gives handy to Orkun Kökçü, but the midfielder plays the ball too far ahead and loses the chance.

1 'AZ immediately breaks through dangerously, but Karlsson does not get his cross at Boadu.

AZ has kicked off and the second top match of the day has started.

Third place is at stake at AZ-Feyenoord.

The difference between Ajax and PSV in the ranking remains six points due to the draw.

Ajax also has a catch-up match (at home against FC Utrecht).

It was still a question of whether Calvin Stengs would make it to today's game, but he was found fit enough and is immediately in the starting line-up.

The attacker missed the match against VVV last week due to illness.

Dumfries angry with Tadic: "He should not talk about my mother."

Denzel Dumfries and Dusan Tadic had a lot of trouble with each other in the final phase.

Dumfries tried to destroy the penalty spot, after which Tadic came to recover from the PSV captain after the penalty was used.

"It's part of a game like that, but I don't think you should talk about my mother," Dumfries said in front of the ESPN camera.

"You can say anything about me, as long as it's not about her."

When all the dust clouds in Eindhoven have cleared, we can focus on today's second top match.

In Alkmaar, the numbers three and five face each other with AZ and Feyenoord.

The difference between the two teams is three points.

In a disadvantaged duel in the Hitachi Capital Mobility Stadium, a hit by attacker Paulos Abraham was enough for FC Groningen to score the three points.

Fortuna Sittard was not in a position to make it really difficult for the home team's defense and leaves the long journey home without points.

The final signal from Makkelie sounds, but the last word about this topper has not yet been spoken.

Dumfries and Tadic in particular are at odds with each other.

Both teams have one point left in the game and especially Ajax will be satisfied with that.

Tadic hits the ball high through the middle: 1-1.

Immediately after the goal, quite a bit of frustration is released at the captain of Ajax, who visits Dumfries.

After a decent scrimmage in front of Mvogo's goal, the ball lands on Dumfries' hand.

Makkelie is determined and points the dot, while Dumfries gets yellow.

The Ajax striker has hardly had any chances.

87 'Zahavi taps the ball away, after which Martínez stands on the foot of the Israeli striker for a while.

The second escapes the arbitration and the first is drawn yellow.

83 'Again PSV gets a free kick in a nice place, but this time Stekelenburg has an answer.

Ajax should actually score, but it is PSV that is dictating at the moment.

82 'Ajax, now with Brobbey within the lines, is chasing the equalizer.

In addition, a lot of space is offered to Eindhoven residents, but the decision has not yet been taken.

Abraham seems to decide the game with his second goal, but referee Van der Laan rejects the goal after consulting the screen.

Larsen Beach blocked a defender in the run-up after the hit.

Substitute Yorbe Vertessen thinks to decide the game, but after intervention by the VAR, PSV's 2-0 does not count.

The attacker took the ball with his hand, according to the VAR in Zeist.

PSV and Ajax each scored sixteen times this Eredivisie season in the last fifteen minutes of an Eredivisie match, the most shared of all teams.

VVV-Venlo follows with fourteen goals in the last fifteen minutes.

76 'Klaassen thinks he will head in a sharp cross from Neres, but Mvogo is just in the middle with his fist.

Is this the start of a final offensive?

71 'With twenty minutes left on the clock, Roger Schmidt has to change for the first time.

Pablo Rosario can no longer continue and so Erick Gutierrez comes within the lines.

Will Eran Zahavi be the match winner in the Philips Stadium?

For now, the Israeli is the only man on the scoreboard.

He fired a free kick from the edge of the penalty area just before half time.

68 'Haller actually seems to have the ball right for his feet to shoot for the first time, but the striker decides to lay wide on Neres.

However, Haller's pass is not good, after which Yvon Mvogo is allowed to bring the ball back into play.

Even after the break, there is not much to do in Groningen except for Abraham's goal.

65 'How will Ajax come to the equalizer?

That is the question at the moment.

The people of Amsterdam are very careless and it is difficult to create opportunities.

61 'Boscagli is terribly close to 2-0 from the following corner, but he finds Stekelenburg on his way.

60 'Stekelenburg sees a return ball from Martínez bouncing over his foot, but to his own relief the ball goes wide of the goal.

PSV will receive a corner in this way.

Paulos Abraham is with his 18 years and 227 days the youngest Swedish goalscorer ever in the Eredivisie.

He takes over that record from Peter Dahlqvist (18 years, 252 days), who scored twice on behalf of PSV against Go Ahead in 1974.

55 'Erik ten Hag has seen enough and decides to intervene with two substitutions.

Álvarez and Antony (reluctantly) go to the sidelines, while Kudus and Neres take the field.

At AZ Calvin Stengs has recovered from illness and is in the base.

That is at the expense of Hakon Evjen.

Danny Makkelie lets play on a lot, but now his limits have also been reached.

The referee gives a yellow card to Olivier Boscagli, who seems to already want the shirt of Jurriën Timber.

50 'Haller undoubtedly spent his time in the stands last Thursday, but now he has to wait fifty minutes for his first chance.

The striker gets the ball on the head from Tadic, but he cannot give direction to the header.