Lindahl: "That fucking gold, I want to win gold"

Hedvig Lindahl is back in the Swedish national team after the knee injury last year. But the question is how long will the 37-year-old be playing or if the Olympics will be her last championship? - I do not know. I want to win gold with Sweden, the national team star answers to SVT Sport. 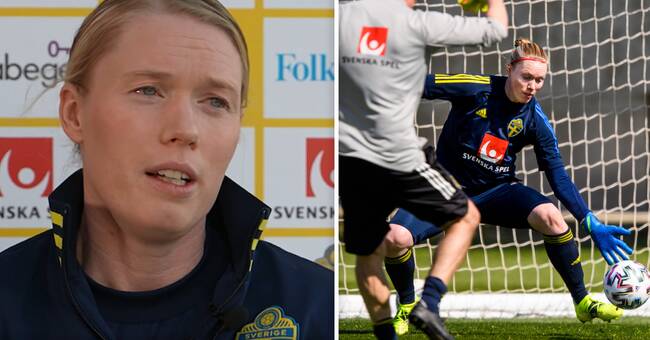 In Friday's training match against Austria, where Sweden won 6-1, Hedvig Lindahl made her 171st international appearance.

Right now she and the national team are in Malta as part of the recharging before the Olympics this summer.

An Olympic game that could be Hedvig Lindahl's last championship.

- I do not actually know, it's all about how good you are.

If I am suddenly not competitive, I do not know if I think it is worth putting all my energy and energy into it, says Lindahl.

She does not want to give up her dreams.

- I would like to have a gold with Sweden, so we will take it this summer so maybe it could be the last, says the national team goalkeeper.

But how do you manage to keep going?

But this is what I can do, this is my profession.

For who wants to hire a 40-year-old without a university education?

That is the harsh reality, says Lindahl.

But that is just one reason.

- Then there's that fucking gold.

Sorry, but I want to win gold, that would be very fun.

But already after the national team break, the next big test awaits Lindahl.

Her current club Atletico Madrid will face Chelsea in the last 16 of the Champions League - the club that Lindahl played for between 2015 and 2019.

I talked to my teammate at Atletico and said that we will play against Chelsea sometime and it happened now.

"Did not leave with the best feelings"

When Hedvig Lindahl was forced to leave the London club, it was not completely frictionless.

- No, that was how it might be when you are on your way out of a team building.

I did not leave with the best feelings but I do not think it is an advantage for me to get there with revenge, but I get a little extra energy in my preparations.

How do you think it will go?

- Chelsea are favorites, they have come further in their Champions League journey and it still means something with that experience, Lindahl says and continues to reflect on how much Atletico Madrid can resist when it is match day:

- We are a fairly new team with some new ones that have come in, but we have had some really good experiences together.

There we have found a really high level and it is only to hope that all preparations are in place, then it can be a really good match.

CLIP: Hedvig Lindahl about the dream and the future

Hedvig Lindahl about the dream and the future