Burnley succeeded, as did Brighton and Manchester City. And so now Everton. For the first time in almost 100 years, Liverpool have lost four league games in a row at home at Anfield. 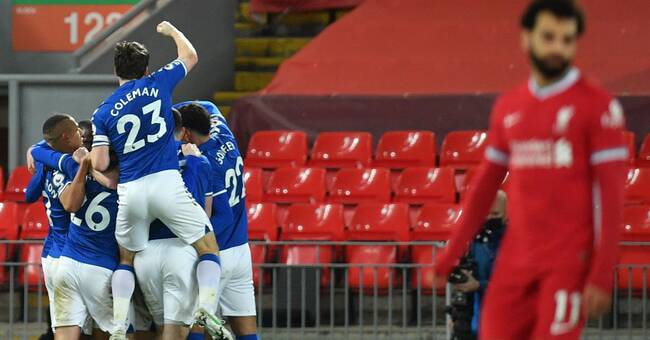 Richarlison showed already after three minutes where the cabinet would stand in the 238th derby.

That goal laid the foundation for Everton's first win at Anfield since 1999.

With just a few minutes left, Everton could feel safe.

Then Gylfi Sigurdsson hit the penalty that gave 2-0.

The away win against Leipzig in this week's round of 16 in the Champions League was not the boost he had hoped for.

And as if that and the derby adversity were not enough for all the tormented supporters, the list of injured midfielders was increased to five.

Team captain Jordan Henderson broke down and was forced to make a substitution.

With the victory, Everton are up to as many points (40) as Liverpool - and also have one match fewer played.

We have been coming for so many years and have left both ourselves and the fans disappointed.

It has been difficult to take it, and I have felt sorry for the fans, says Everton team captain Seamus Coleman to Sky Sports, and adds a little later:

- We met the champions, and won.

So we are very happy about that.