Athletes confirmed that coach Mahdi Ali made a big leap in the performance and results of Shabab Al-Ahly, in the past period, which contributed to the return of the "Dubai Knights" to the list of strong candidates to win the championships this season, especially that the team achieved the title of the Super Gulf Cup, while it became the most prominent candidate To win 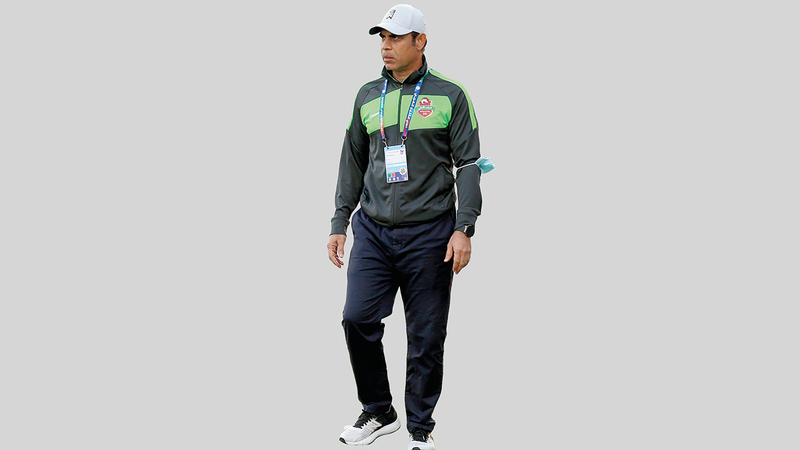 "The Engineer" extracts the energies of 7 players ... and athletes confirm:

Athletes confirmed that coach Mahdi Ali made a big leap in the performance and results of Shabab Al-Ahly, in the past period, which contributed to the return of the "Dubai Knights" to the list of strong candidates to win the championships this season, especially that the team achieved the title of the Super Gulf Cup, while it became the most prominent candidate To win the President's Cup and the Arabian Gulf Cup, as many nominate him to become the most prominent club that will determine the direction of the league title, through the results that he will achieve with the teams that compete in the top.

They told Emirates Today that Mahdi Ali extracted the energies of at least seven players in the past period, namely: Hamdan Al Kamali, Abdulaziz Sanqour, Abdulaziz Haykal, Majed Hassan, Yahya Al Ghassani, Saeed Ahmed and Muhammad Jumaa (Pele), pointing out that the experience of the “engineer” I have contributed to changing the levels of players for the better, while the most important thing is that he has re-equipped international players and explored new players, who will contribute greatly to helping the Dutch coach Bert van Marwijk make the national team appear well, in the double qualifiers for the 2022 World Cup and the 2023 Asian Cup.

For his part, sports analyst and former director of football at Al-Nasr Club, Khaled Obeid, said that Al-Ahly Youth Administration's contract with coach Mahdi Ali was an ideal solution for the team in general, and for international players in particular, explaining that "the engineer" recovered the energies of the players, whose levels had declined in the last period.

He added: "The most prominent characteristic of Mahdi Ali is that he knows most of the players in the Al-Ahly youth team, and he previously trained them in the youth team and the national team, so we have seen a significant improvement in the results and level of (Dubai Knights) in the last period."

He pointed out that the national team and the Dutch coach, Bert Van Marwijk, are the most prominent beneficiaries of the improvement in the performance of international players in Al-Ahly youth, especially that "Al-Abyad" will enter the most important and difficult stage in the World Cup qualifiers and the Asian Cup in the coming period.

For his part, the deputy technical supervisor of the Football Academy at Al-Ahly Youth Club, Antar Marzouq, confirmed that coach Mahdi Ali made the difference with some players who were threatened with disappearing due to their declining levels, or their non-participation in the last period.

Marzouq said that Al-Ahly youth received many criticisms, after contracting with Hamdan Al-Kamali, explaining: “I see that no other coach would not have given Al-Kamali the opportunity that he got with Mahdi Ali, especially since the latter fully knew the player's potential, so we saw a great development in his level, And he appeared well with the team ».

He continued: “The same applies to Abdulaziz Sanqour, who missed a long period of participation in matches for up to three seasons, but Mehdi Ali had great courage in participating in the Super Cup and relied on him in the next stage, while the team’s list witnessed the inclusion of Muhammad Jum’a ( Pele) and Saeed Ahmed, after their brilliance with the team, Majid Hassan, Abdulaziz Haykal and Yahya Al-Ghassani appeared in a different way for the better with Mahdi.

On the other hand, the sports analyst and former Al-Jazeera player, Rakan Al-Ajami, confirmed that Mahdi Ali is doing a great job, which will positively reflect on the results of the national team in the next stage, explaining: “Emirati football lived a golden period, when (the engineer) took over the training of youth and Olympic teams. The first, while the decline in the performance of players in the last period of Mahdi Ali was a natural thing, because there are no players performing at constant levels.

He added: “Mahdi Ali dealt with Shabab Al-Ahly players very well on the psychological level, which is the basis for the development of their levels in the past matches, while I think that it may be a turning point in the level of Omar Abdul-Rahman, if he joined (Dubai Knights), after the player's departure. On Al-Jazeera, especially since (Amouri) is closely related to Mehdi Ali, and the latter can restore the player to his level if he recovers completely from the injury that kept him out of the stadiums.

"Mahdi Ali can restore (Amouri) to his level, if he fully recovered from the injury."

"(The engineer) has recovered the energies of the players, whose levels have declined in the past period."

"Coach Mahdi Ali made the difference, with some players who were threatened with disappearing."