The Swedish talent Oliver Solberg makes his debut in the WRC class, the rally's fine room and the WC's highest class. - Absolutely unbelievable, it is an indescribable feeling to finally start in a real thoroughbred WRC, says Oliver Solberg to SVT Sport. 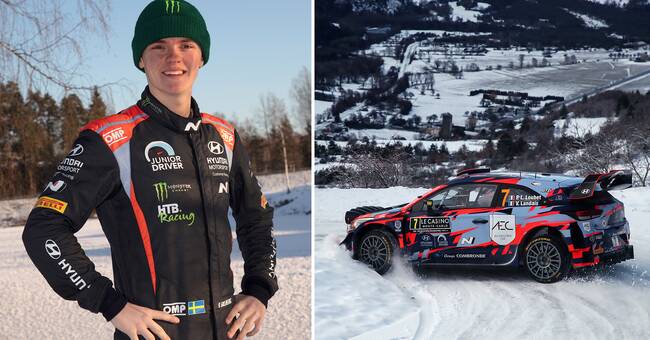 19-year-old Oliver Solberg, who before the season signed a factory contract with Hyundai, the reigning world champion in the branded WC, gets the chance in the WRC already in this year's second WC competition, Arctic Rally Finland.

- Hyundai was so "happy" with my speed in Monte Carlo already.

And they thought: "Why not jump in right away and learn the car"?

I think they want me to go in right away and learn as much as possible.

And I did not exactly say no, says Solberg happily.

He has only competed in rally since 2017 and already now getting the chance in a WRC car is a dream come true for Solberg, who otherwise bets on the WRC2 championship this year.

- I had hoped to be able to win this competition in R5 (WRC2) but it is much cooler to drive in a WRC car so I can only hope to maybe take some points there, no we will see… It is just to drive on and we get to start the R5 season a little later.

Oliver did not drive for World Cup points in WRC2 in the premiere in Monte Carlo but immediately showed proof of his capacity.

He took two distance victories in the class and noted several peak times all cars included.

Prior to that, debut for Hyundai with a podium place in the Arctic Lapland Rally.

The experience of having recently driven on the stretches in Rovaniemi, Finland, where the World Cup is now run, provides security.

- It is guaranteed to help that we know the area and the roads.

But at the same time we start from scratch with a new car.

But it's fantastic to get to such a competition and there you really learn how aerodynamics work in such a fast rally.

It's a good competition to start with.

The competition as a test

Already this weekend, Solberg and his map reader Aaron Johnston are driving a test with the WRC car in Finland.

The goal in the upcoming World Cup competition is to gain experience.

- They (Hyundai) said that you also take the competition as a test.

There is no pressure on results, nothing.

- Of course we are keen to see what level Oliver is at, but we make no demands on his debut other than that he should enjoy and gain as much experience as possible.

We see this more as a test than a competition for Oliver.

He must adapt to the car and the car's performance in demanding winter conditions.

The goal is for us to see a happy and satisfied Oliver cross the finish line after the last special stage, says team manager Adamo in a press release.

Solberg about the challenge with the new WRC car