China News Service, Beijing, February 4 (Reporter Xing Chong) Located at the Linglong Tower in the center of the core area of ​​Beijing Olympic Park, the countdown clock of the Beijing Winter Olympics shows 365 days. The National Stadium Bird’s Nest, which rises more than 500 meters south of Linglong Tower, witnessed the Olympic dream and glory of Chinese people in 2008, and the night one year l 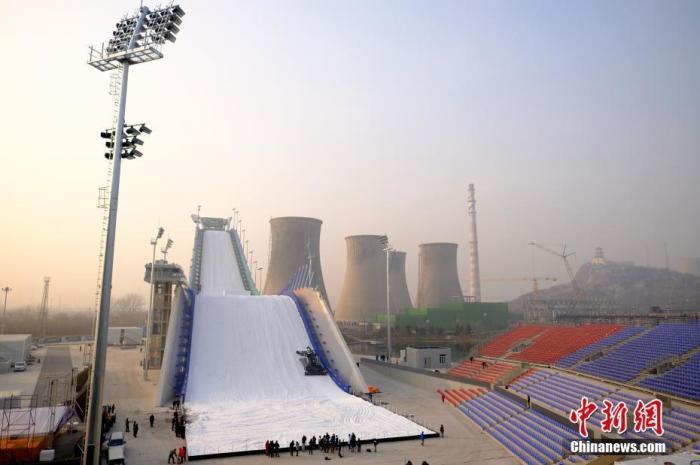 The National Stadium Bird’s Nest, which rises more than 500 meters south of Linglong Tower, witnessed the Olympic dream and glory of Chinese people in 2008, and the night one year later will usher in the opening of a World Olympic Ice and Snow Feast.

This is a Chinese dream and glory about the Winter Olympics.

Data map: The Shougang Ski Jump is the venue for the Beijing Winter Olympics ski jumping event and the only snow event venue in the Beijing competition area.

In 1980, in Lake Placid, the Chinese Olympic Committee participated in the Winter Olympics for the first time after restoring its legal seats.

However, 28 athletes participated in 18 individual events at that time, but none of them entered the top six.

In 1998, in Nagano, Japan, Chinese biathlon athlete Yu Shumei won the fifth place in 7.5 kilometers. She collapsed after finishing the race.

At that time, some media said that this was the most difficult honor for China’s skiing in 50 years. “It was born on dry snow under severe cold and strong wind. It belongs to a group of China that lacks ideal skiing conditions but does not lack ideals. people".

Severe cold, strong wind, and dry snow were once the portrayal of China's ice and snow sports.

However, due to natural conditions and other factors, China's ice and snow sports can almost only be carried out in the Northeast.

"There is no shortage of ideal Chinese people" continue to chase, bred miracles one by one on the dry snow.

When Chinese people's enthusiasm for the Olympic movement is stimulated, and when China continues to move toward a sports power, the Winter Olympic dream is further ignited in the new historical coordinates.

In March 2014, the International Olympic Committee announced that Beijing and Zhangjiakou would become a candidate city for the 2022 Winter Olympics.

On July 31, 2015, at the Kuala Lumpur Convention and Exhibition Center in Malaysia, IOC President Bach announced that Beijing has won the right to host the 2022 Winter Olympics.

So far, the city has a new label-the world's first "Double Olympic City" to host the Summer Olympics and Winter Olympics.

Data map: On January 28, the National Speed ​​Skating Stadium where ice production has been completed.

[When the Winter Olympics dream shines into reality]

Taking advantage of the hosting opportunity, promoting the leapfrog development of ice and snow sports has become China's original intention of hosting the Winter Olympics.

When dreams come into reality, the past five years have witnessed the quiet and dramatic changes in China's ice and snow.

For example, the number of national standard ice skating venues has increased from 157 to 388, and the total number of ski resorts has increased from 568 to 770; more than 3,000 mass ice and snow activities such as the "National Public Ice and Snow Season" and "China Ice and Snow Conference" are held every year in China. The proportion of the snow sports population has exceeded 15%.

For another example, among the 109 events of the Beijing Winter Olympics, nearly one-third of the projects had not been carried out in China before.

In just a few years, many ice and snow projects in China have been developed from scratch, and some have reached the world's advanced level.

In addition, a large ski jumping platform "crystal shoes" was built in the abandoned industrial park of Shougang; the national swimming center "Water Cube" turned into "Ice Cube", becoming the world's first venue to achieve "water-to-ice conversion"; national speed skating Pavilion "Ice Ribbon", National Ski Jumping Center "Snow Ruyi"... These poetic names have all become reality at the end of last year. Their charm will not only stop at the Winter Olympics, but will also witness Chinese ice and snow in the future. Inheritance and development.

The world’s first high-speed railway with the highest design speed of 350 kilometers per hour, the high-speed railway connecting Beijing and Zhangjiakou. The mascots "Bingdundun" and "Xuerongrong" carry the "Chang'e-5" to the moon... This is China Wisdom once again complements the Olympic culture.

When hosting the Winter Olympics and the coordinated development of Beijing-Tianjin-Hebei, independent technological innovation, high-quality economic development, and other major strategic deployments, the Winter Olympics dream has long been integrated into the torrent of the times. This is "the Chinese who does not lack ideals" to build a sports power. The dream is the dream of realizing the great rejuvenation of the Chinese nation.

The future is a continuation of the past.

Today's snow is no longer dry, and ice and snow sports have also entered Shanhaiguan from the northeast. China's snow and ice has forged ahead and wrote the most solid footnote for the Winter Olympics a year later.

This is a Chinese dream and glory about the Winter Olympics.

We have reason to believe that one year later, this will be a wonderful, extraordinary and outstanding Winter Olympics.