Linn Svahn: Give me Johaug on the last stretch

Linn Svahn defeated the impossible Therese Johaug in 10 km in Falun and won the day after the sprint as usual. Self-confidence is completely boiling in Swedish after the success in Falun. - You know what, give me Therese Johaug. I hope to meet her in the last stage of the World Cup relay, says Linn Svahn to Dagbladet. 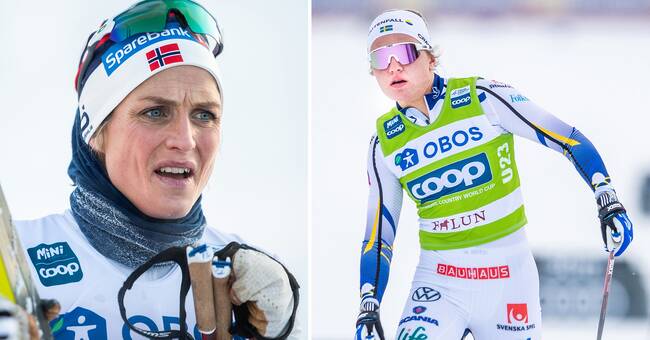 Svahn is not afraid of Johaug.

Just as Stina Nilsson showed at the WC in Seefeld, Svahn thinks she has a good chance.

- It would have been an honor to meet Therese on a final stretch and get a duel against the female giant in cross-country skiing.

Meeting her would be a real honor, especially if I could beat her.

It would have been cool.

Svahn in no way believes that Johaug's time as a ski queen is over.

- That the Falun weekend shows that it is possible to beat Therese is inspiring.

But I do not think we see a change of throne just because Therese was defeated in Falun.

Johaug is still the giant in skiing and will probably be for a while longer, says Svahn to the Norwegian newspaper.

Won more than Johaug - in percent

But the fact is that Svahn has already passed Johaug in a way.

She has a higher victory percentage at individual World Cup starts than the Norwegian, shows a review Dagladet has done.

Svahn has won 33 percent of the races she competed in, while the same figure for Johaug is 31 percent.

This can be compared with, for example, Marit Björgen's 37 percent.

On the men's side, we find another Swan, namely Gunde Svan who won 43 percent of the races he competed in. Johannes Höstflot Kläbo is up in the same number.

Johaug does not want to

Victory and full of adrenaline but there will probably be no fight against Johaug at the World Cup anyway.

Even after the loss against Stina Nilsson in Seefeld, Johaug said firmly that she never wanted to run the final distance at a World Cup again.

- I will never want to go the last stretch again, Johaug said firmly then and she has not changed.

It is more likely that Svahn, if she gets to go Sweden's final distance, will have to meet Heidi Weng or Marie Fossesholm.