Frida Karlsson's fall may have cost Johaug the victory

For the first time in almost five years, Therese Johaug lost a 10 km freestyle race at the World Cup when Jessie Diggins won in Falun. Afterwards, Johaug said that she was delayed by a case of Frida Karlsson. - I lost a few seconds there, says Johaug. 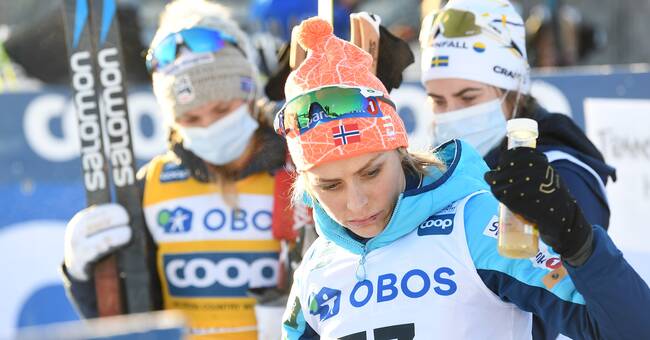 It was thrilling when Johaug gave everything at the end but had to give up with 2.1 seconds and Diggings moved to tears could let go of the victory cheer after leaving the leadership chair at Lugnet's ski stadium.

Out in the woods, Johaug had caught up with Frida Karlsson for a minute and the Swede fell on one of the downhills.

- Frida fell right in front of me in one of the sharp icy curves and luckily I managed but I had to plow behind her and lost a few seconds in a couple of places.

That is what happens, says Johaug to NRK.

At the top of the hill, Johaug led by four seconds ahead of the Diggins while she was two seconds behind in the finish.

Did you lose the victory when Frida fell and you lost momentum?

- I do not know, but I lost a few seconds there, there is no doubt about that, says Johaug.

Karlsson was disappointed in himself after two falls down after Mördarbacken.

She also did not have the right energy.

- I'm so damn pissed that I can not even stand on my feet, was very dumb, says Karlsson to SVT Sport.

Karlsson beat Johaug in last season's final three miles in Holmenkollen, something that is still talked about and spilled over into this season as well.

- I know how much the loss to Frida has irritated her.

I think it has sharpened her and that she will also make a better World Cup out of it, says junior Helene Marie Fossesholm about the rivalry between 32-year-old Johaug and 21-year-old Karlsson, who has been pointed out by many as the crown princess in the ski tracks.