McGregor's injuries and the possible deprivation of Nurmagomedov's title: how Poirier's success will affect the UFC lightweight division

Conor McGregor risks missing up to six months due to injuries sustained in a fight with Dustin Poirier at UFC 257. At the same time, the defeat of the ex-champion in two weight categories by knockout could destroy the chances of resuming the career of Khabib Nurmagomedov and provoke the leadership of the promotion to deprive the Russian of the title. What effect on the development of the lightweight division can the result of the battle between the Irishman and the American have - in the RT material. 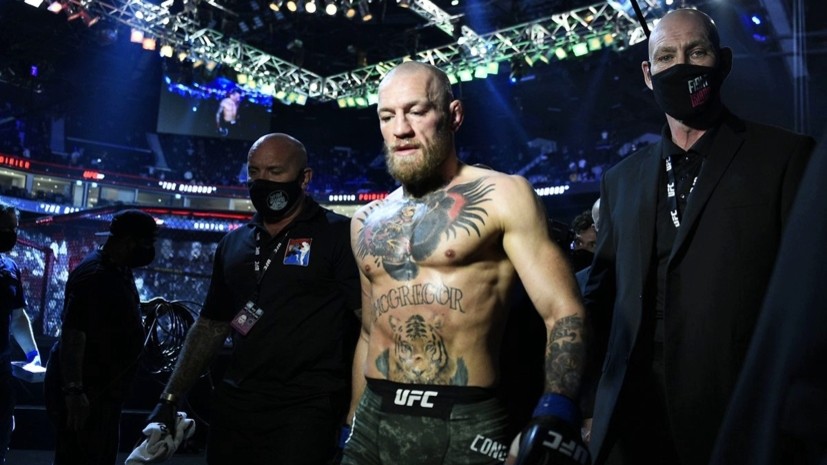 What does McGregor's medical suspension say?

As it became known, the ex-UFC champion in two weight categories is unlikely to be able to enter the cage in the first half of 2021.

At the end of the tournament, Conor McGregor underwent an examination, which revealed that he had serious injuries to the tibia and fibula of his right leg.

In this regard, the Irishman was suspended from performances for up to 180 days.

However, he may return earlier in case of full recovery.

But if you look at it, there is nothing extraordinary in the current situation.

After such a crushing defeat, McGregor needs time to draw conclusions and make changes in the training process.

Therefore, it was not necessary to wait for his return earlier than mid-summer.

At the same time, even such a long, at first glance, suspension does not put an end to his plans to hold three fights in a year.

Ideally, he will be able to fight at the end of July, after which he will have enough time to hold another fight in November-December.

It is worrying that leg injuries are becoming more and more regular for McGregor.

During his fight with Max Holloway, he tore the anterior cruciate ligament and meniscus, and also stretched the medial collateral ligament.

Knee problems accompanied the preparation for the battle of the Irishman with Chad Mendes, after the second battle with Nate Diaz, he was diagnosed with injuries to the foot and ankle, and on the eve of the battle with Khabib Nurmagomedov, as it turned out later, he broke his toes and foot.

Do not be surprised if all of his next opponents will bet on low-kicks, because both his hospital card and his wide stance have it.

At the end of the tournament, many colleagues hastened to write off the Irishman and declare that the fiasco in a duel with Porier could discourage McGregor from returning to the cage.

Undoubtedly, there are reasons for this.

Previously, Conor never lost by knockout, and for many fighters this is a kind of point of no return.

If you add to this the risk of chronic foot problems and the need to re-break to the top of the division, then the likelihood of a career retirement is quite real.

However, McGregor has always been famous for his fighting nature and desire to win.

He was not broken by two offensive failures at the start of his career, nor failures in the UFC.

The defeat not only gave him motivation, but also provoked progress.

Suffice it to recall how much he changed in the return battle with Nate Diaz, as well as how he impressed everyone with new ideas in the battle with Donald Cerrone.

The Irishman will probably make every effort to get even with Poirier, so it is hardly worth sending him to "retire".

At least until he lost twice in a row.

Who can McGregor fight next?

At the moment, the media are mainly discussing the return fights with Porye and Diaz.

With both, McGregor has an equal score in the series and is ready to re-enter the cage.

But even though the aforementioned battles promise to be bright and high-grossing, they run the risk of not being the best options for continuing the career of the ex-champion in two divisions.

It is likely that the Irishman does not need to force a return to the elite of the category, but should first test himself in battle with less skilled opponents.

This will allow him not only to regain self-confidence, with which, obviously, problems arose after the defeat by Nurmagomedov, but also to try out new techniques.

There is no doubt that the Irishman needs to find a new way to protect himself from blows to the legs, otherwise the rematch with Dustin could end just as badly, and the meeting with the conditional Justin Gaethje threatens to end with a serious injury.

Perhaps McGregor should turn his attention to the fighters in the second five of the UFC rankings.

The fight with the same Dan Hooker or Paul Felder promises to be an excellent test in the stand, and with Rafael Dos Anjos - to demonstrate his willingness to fight Nurmagomedov again.

In addition, they were supposed to fight the Brazilian back in 2016, as a result of which an increased interest in this duel is ensured.

The stumbling block can be both Conor's conceit and the position of the leadership.

The Irishman may not agree to take a step back, and the same Dana White - to arrange a fight less attractive from a financial point of view.

Should we wait for the return of Nurmagomedov in 2021?

Until last Sunday, one of the few reasons for the return of Nurmagomedov was considered his possible revenge with McGregor.

There was no doubt that the return fight between the stars of the division could become one of the highest grossing in the history of MMA and elevate the 30th fight in Khabib's career to the status of historical.

However, the failure of the Irishman not only negated the chances of a second fight, but also sharply reduced the likelihood of resuming the Russian's career.

Now in the lightweight division of the UFC there is no fighter whose fight with Nurmagomedov would have caused sufficient resonance and would be of interest from a sports point of view.

Poirier is still not considered a worthy opponent for the champion, and their possible revenge is hardly discussed.

Michael Chandler and Charles Oliveira do not have sufficient status, Tony Ferguson has two defeats in a row.

And the prospect of a fight with Georges Saint-Pierre is becoming more and more illusory every month.

Is there a possibility that Nurmagomedov will resume his career in the future?

At first glance, such a development of events seems unlikely.

Like any other sport, mixed martial arts require constant practice, and a break in performances for a long time can seriously affect even such a professional as Nurmagomedov.

You should also not sweep aside the fact that endurance is at risk of noticeably decreasing with age - one of Khabib's trump cards.

As a result, wrestling skills will suffer, and this will certainly lead to problems.

Nevertheless, the reigning lightweight champion may take a rather long pause, after which he decides to spend his 30th fight in his career.

Even if there is no fighter in the lightweight division now who can impress and attract the attention of Nurmagomedov, this may appear over time.

In addition, during this time, the same McGregor may well find a second wind.

If the Irishman manages to become the champion again, then their revenge with the Russian will be a unique event.

Should White give Poirier's belt?

Due to the fact that the chances of a quick return of Nurmagomedov tend to zero, it seems more and more likely that the Russian will be deprived of the champion title.

The absence of an active champion threatens to have a negative impact on the situation in the division, which is unlikely to suit the UFC.

It can be assumed that White will still try to carry out another stage of negotiations, but if he refuses, he will take action.

The main question is whether the belt will become vacant or immediately fall into the hands of Poirier.

There is no doubt that at the moment he is the most worthy candidate for champions.

In recent years, Dustin has defeated almost all the stars of the division with the exception of Tony Ferguson, and lost only to Nurmagomedov.

However, changing the owner of the trophy outside the octagon is not the most popular practice, and not the most star American can hardly count on special treatment from the promotion.

The most likely is the fight for the vacant lightweight title.

And if Poirier's candidacy is hardly negotiable, then both Chandler and Oliveira can become his rivals.

The first one not only made a very bright debut in the UFC, but also has a lot of experience and an impressive list of achievements.

The second has a streak of eight consecutive victories in the largest MMA promotion.

Can Poirier get a fight with Nurmagomedov again?

In theory, the battle between Porier and Nurmagomedov is very real, but only under certain conditions.

To do this, the American needs to take the title and make several successful defenses against the top fighters of the division.

A series of consecutive victories over the conditional Chandler and Oliveira, as well as the completion of the trilogy with McGregor, could very well have provided Dustin with the status of a superstar in mixed martial arts and made him an interesting opponent for Nurmagomedov.

The only catch is that Poirier can hardly be considered a clear favorite in any of the above confrontations.

Chandler is at least as good as him in stance, Oliveira is significantly superior on the ground, and motivated and collected McGregor can give odds both on his feet and on the ground.

So far, there is no reason to believe that he will be able to defeat the same ex-Bellator champion, and the duel with Hooker may well be considered a cause for concern.

If Dustin needed to spend 25 minutes with the New Zealander, Michael solved all the issues in two and a half.