Without Messi, Barcelona suffered before getting rid of Real Sociedad at the end of the night (1-1, 3-2 tab) 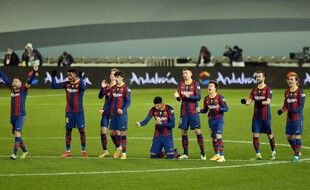 Barça qualified for the Copa del Rey final on penalties.

Deprived of its captain Lionel Messi, FC Barcelona still ended up overpowering Real Sociedad on penalties on Wednesday (1-1, 3 tab to 2) during the first semifinal of the Spanish Supercup in Cordoba: a real revenge, a year after the debacle in Saudi Arabia.

At the end of the night, a miracle: German goalkeeper Marc-André ter Stegen saved two of the Basques' five strikes during the penalty shoot-out to allow Barça to reach the final after a thrilling semi-final from the start at the end.

Previously, the Barcelona had opened the scoring thanks to a perfect cross from Antoine Griezmann on the head of Frenkie de Jong (39th), but were joined on a penalty from the Basque captain Mikel Oyarzabal (51st), following a hand de Jong in the box.

Despite a penalty missed by Antoine Griezmann and thanks to ter Stegen, FC Barcelona is qualified for the final of the Super Cup of Spain to follow this Sunday! #LequipeFOOT pic.twitter.com/wYeQUA35UL

Against Bilbao or Real in the final

This qualification, the men of Ronald Koeman owe it largely to their German goalkeeper Marc-André ter Stegen, author of some crucial stops in extra time, in particular on a free kick perfectly struck by Adnan Januzaj ... and during a shooting session to masterful purpose.

In the final Sunday in Seville (Andalusia, southern Spain), the Catalans will therefore find Real Madrid or Athletic Bilbao who face each other Thursday in Malaga in the second semi-final.

Coronavirus: Its budget is totally fanciful, Barça on the verge of filing for bankruptcy

Liga: "The players are growing", Atlético Madrid on their way to the Spanish league title?