The national team is in a strong test against the "Lions of Mesopotamia", under Marvik's eyes

The national team is running today at 7:30 pm, at Al Wasl Stadium in Dubai, an international friendly confrontation against its Iraqi counterpart, as part of the teams' preparations for the joint qualifiers for the 2022 World Cup and the 2023 Asian Cup, which will start again next March, as Al-Abyad seeks to prepare the 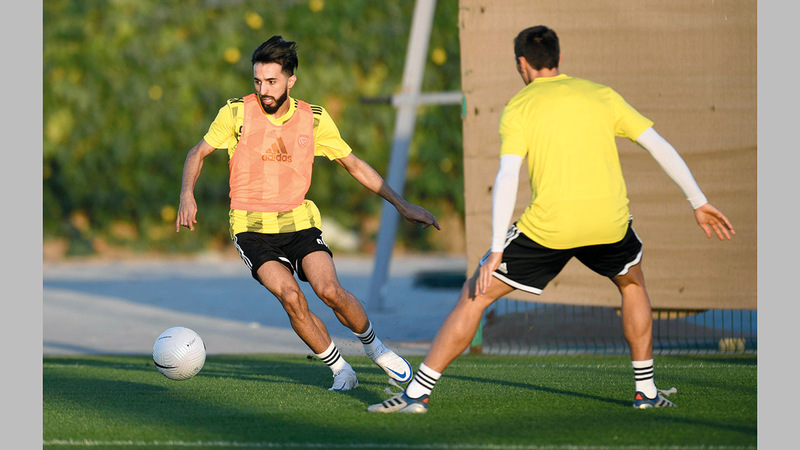 The national team is in a strong test against the "Lions of Mesopotamia", under Marvik's eyes

The national team is running today at 7:30 pm, at Al Wasl Stadium in Dubai, an international friendly confrontation against its Iraqi counterpart, as part of the teams' preparations for the joint qualifiers for the 2022 World Cup and the 2023 Asian Cup, which will start again next March, as Al-Abyad seeks to prepare well and restore His true image and level, after his career witnessed a remarkable decline in the last period, which caused continuous changes at the level of coaches.

This match represents a real test for the national team during the era of its new coach, Bert Van Marwijk, who is his first match with the national team since he took over the job last month, succeeding the former Colombian coach Pinto, noting that the national team had fought three international friendly matches during the reign. Pinto against the teams of Uzbekistan, Tajikistan and Bahrain, and lost in the last confrontation against Bahrain.

The technical staff of the national team relies on this experience in knowing the levels of the players who have been chosen in the new list, which mixed between experienced players and young elements, in addition to the fact that the match is a good opportunity for Marvik to implement his technical and tactical plans, especially since it is facing a strong team, as it will be an appropriate opportunity For more harmony and understanding between the players, especially in the midfield and offense lines, with the presence of great players, such as Ali Mabkhout, Tigali, Cayo Canedo and Fabio de Lima.

Al-Abyad will meet on March 25 and 30, respectively, with the teams of Malaysia and Indonesia, as part of the World Cup qualifiers.

Marvik had chosen 31 players in an expanded list, before it was reduced to 27 players. The team that plays in Group G in World Cup qualifiers along with Malaysia, Indonesia, Vietnam and Thailand fought an internal camp in Dubai, which has continued since the third of this month.

On the other hand, this match also represents a new opportunity for the Iraqi team, led by the Slovenian coach, Stricko Katanic, to test his readiness for the next stage, noting that Katanic had previously coached the Whites.

Khasif: The mission is not impossible

The goalkeeper of the national team, Ali Khasif, confirmed Al-Abyad's readiness to complete the rest of his matches in the joint qualifiers for the World Cup and the Asian Cup, pointing to the strength of today's friendly confrontation against Iraq, which includes in its ranks a number of distinguished players, indicating that this motivates them as players to a strong performance that is like A message of reassurance to the public that the team is fully prepared.

Khasif said in press statements that they are aware of the importance and difficulty of the next stage, especially since the national team is currently ranked fourth in the group's ranking, but the task at the same time is not impossible.

Kayo: Proud to wear the white shirt and ready to defend it

The striker of the national team, Caio Kanedo, expressed his pride in wearing the white shirt and defending his logo with the rest of his fellow players, pointing out that the team has four crucial matches against Malaysia, Indonesia and Vietnam, so it is in dire need of victory in order to cross the next stage, considering that the team will succeed with more Effort and solidarity in achieving the fans' aspirations to qualify for the second round of the qualifiers.

In a press statement on the sidelines of the national team training, the day before yesterday, Caio pointed to the importance of today's friendly match against Iraq, because the opponent is one of the strong Asian teams, and friction with him is useful for the team in gaining additional experience and increasing the technical readiness before the start of the joint qualifiers for the World Cup and the Asian Cup. .

He added, "There is a response by the players to the thought of the Dutch coach Marvik, and the morale of all the players is high."

Hammad: The national team is not in a comfortable situation, but its chances are strong

The supervisor of the national team, Mohamed Obeid Hammad, confirmed that although the national team is not in a comfortable position at present in its group, its chances are strong to qualify for the second round in the joint qualifiers for the 2022 World Cup and the 2023 AFC Asian Cup, if it can win its next two matches against Each of the teams of Malaysia and Indonesia, stressing that everyone hopes that the team will achieve the dream of reaching the World Cup.

In response to what is going on in the sports community that coach Marvik is not present in the country except in the event that there is a gathering of the team, he said that the coach, after contracting with him, finally followed up two rounds of the Arab Gulf League matches, and summoned some players through his follow-up to the previous matches, pointing out Also, the presence of the auxiliary device for Marvik, and its follow-up of the statistics of the players, their performance, and their participation in competitions.

"We must take the competition step by step, and focus on the next two matches against Malaysia and Indonesia," Hammad said in a press statement.

He added, "The other teams in the national team are not better than them even in the first stage of the qualifiers, but the team lost some simple lapses points. If it had obtained it, it would have been in a better position than it is now, but we are counting on the players in the compensation process through The seriousness that we have seen of them during the last period in the camp, and we hope that they will appear well during the Iraq match today ».

The team’s supervisor confirmed that the team’s door is open to any player in the next phase, pointing out that all teams are looking forward to playing with Iraq, as it is a team that has great physical structure and skill.

Hammad indicated that the next gathering of the team in February will be for a period of four days during the period from the sixth to the tenth.

Abyad will face Malaysia and Indonesia on March 25 and 30 in the qualifiers.