Sale of Azmun to Borussia, Gaich's departure to Argentina and interest in midfielder Fenerbahce: the main transfer expectations of the RPL

The leaders of the Russian Premier League are preparing for the imminent opening of the winter transfer window. According to sports media, Zenit agreed to let Serdar Azmun go to Borussia Dortmund for € 20 million, and he himself joined the fight for Gremio forward Pepe. Spartak was among the contenders for the acquisition of Fenerbahce midfielder Ozan Tufan, and also offered Rostov the exchange of Alexander Kokorin for Matias Norman. CSKA forward's agent Adolfo Gaicha announced the interest of Boca Juniors, while the army team focused on finding a defensive midfielder. 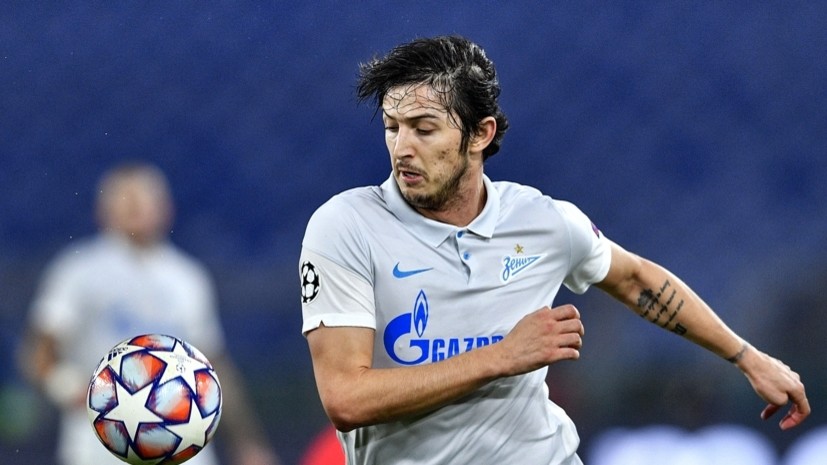 On January 29, a winter transfer window will open in the RPL, but now there is a lot of unconfirmed information about the conclusion of possible deals with the participation of domestic clubs.

According to this information, the championship leaders represented by Zenit, CSKA and Spartak will be the most active on the market.

So, if you believe the sources, Petersburgers are ready to part with one of their leaders and have already looked for a replacement in Brazil, and Moscow teams are ready to sell unprofitable assets and compete for the top scorer of the Turkish grandee.

Selling Azmun and a generous fee for Pepe

According to the Italian portal Tuttomercatoweb (TMW), Zenit striker Serdar Azmun fell into the sphere of interests of Borussia Dortmund.

No specific proposals from the German club have been reported, however, the publication notes that the Russian team estimates the Iranian Messi at € 20 million.

It is worth recalling that Azmun's possible move to Europe was discussed even during his performances for Rostov and Rubin, and in the summer the excitement around his person increased noticeably.

It was reported about interest from London's Arsenal and Milan, and Napoli was allegedly ready to shell out € 25 million for one of the best scorers of the RPL.

However, everything remained at the level of rumors, and the Iranian continued his career at Zenit.

In the current championship, Azmun has already managed to score 11 goals, which allowed him to share the first place in the scorer's dispute with Artyom Dzyuba.

And even unsatisfactory results in the international arena did not greatly affect its status.

In the Champions League, Serdar played four matches, but did not score goals and assists.

According to the former Zenit goalkeeper Vyacheslav Malafeev, the Iranian may indeed be one of the possible goals of Borussia, and the transfer may cost a larger amount.

“The news that different clubs are interested in Azmun does not surprise me at all.

Serdar brings quite a lot of benefit to Zenit ... 20 million euros?

I think this amount appears because of Transfermarkt's assessment, which, as we understand, is not always correct.

It leaves out many aspects.

When the player is interested in teams that can pay more, the price rises.

This has always been the case for the Russian market, and the same for the European one.

I think that this amount is optimal to start negotiations, but this is definitely not the final cost of Azmun, ”Malafeev told Metaratings, noting that the deal should be completed either in winter or in summer 2021.

At the same time, it is already known who exactly can compensate for Azmun's absence in the line of attack of the blue-white-blue.

It is reported that the reigning champion of Russia joined the fight for the Brazilian Gremio striker Pepe, who chalked up eight goals and four assists in 23 matches of the current season of the Brazilian championship.

At the moment, Porto and Sevilla also claim him, and the Portuguese team is considered the favorite.

And the point here is not only that the "dragons" are ready to pay € 15-18 million, but also transfer 15% of the future resale of a football player.

According to UOL, the footballer himself is ready to move to Europe, but considers the RPL the least priority option for continuing his career.

Therefore, “Zenith” will have to make significant efforts to convince both the club and the winger himself.

True, in the first case, there should not be any special problems, because, as reported, St. Petersburgers are ready to interrupt Porto's generous offer and pay € 20 million for Pepe.

Passion for Kokorin and the purchase of the top scorer "Fenerbahce"

Zenit's rival in the fight for the RPL gold medals may also lose one of its expensive forwards.

At the end of last year, information appeared about the possible departure of Alexander Kokorin from "Spartak", and in the new conversation did not subside.

And this despite the fact that the footballer went with the team to the training camp in the UAE.

Among the possible contenders for Kokorin were named "Sochi", "Rostov", teams from the Major Football League (MLS), as well as a number of Italian clubs.

In particular, RB-Sport reported that Fiorentina was ready to offer about € 5 million for the striker, and Match TV indicated interest from Roma and Bologna.

True, Alexander's move to the Apennines seemed unlikely for two reasons at once - because of the high salary of the athlete and the status of a legionnaire in Serie A.

As for Rostov, according to the Championship, the forward could become part of the deal to acquire Matthias Normann.

As far as we know, Spartak has long wanted to get the Norwegian midfielder and was ready to make an exchange with a surcharge.

But later, these rumors were also dispelled.

According to Match TV, this transfer was vetoed by the head coach of the yellow-blue Valery Karpin.

The mentor allegedly fears that Kokorin and Mamaev could harm each other if they find themselves on the same team.

As for the reinforcement, both the intention to return Resiuan Mirzov from the lease in Khimki and the desire to buy one of the leaders of the Turkish Fenerbahce are reported.

According to FutbolArena, Spartak's attention was drawn to the 25-year-old center midfielder Ozan Tufan, who is not only one of the most expensive representatives of the club according to Transfermarkt, but also his top scorer this season.

The midfielder has scored four goals.

Interest in Tufan from Russia has already been confirmed by representatives of the player himself from the FutureBall agency.

At the same time, it became known that the midfielder is not averse to attracting not only Spartak, but also CSKA, ahead of him in the RPL table by two points.

Rent Gaich and search for a midfielder

Apparently, CSKA is also considering the option of selling or renting a footballer, who has so far failed to justify the advances given to him.

Unlike Kokorin, which Spartak got for free, Adolfo Gaich switched to the army team from San Lorenzo for € 8.5 million, making him the seventh most expensive acquisition of the team in history (according to Transfermarkt).

Nevertheless, the adaptation of the Argentine is not going as well as the red-blue bosses would like.

In 18 matches, the striker scored one goal and one assist, in general, leaving a not very pleasant impression of himself.

Therefore, it is not surprising that already in the winter there were talks about his possible departure from CSKA.

First, La Cuerveria reported about the interest in Gaich from the Argentine Boca Juniors, and then TyC Sports announced his possible departure to the Turkish Besiktas.

One of the reasons is the desire of Adolfo to compete at the Summer Olympics in Tokyo.

And according to the athlete's agent Pablo Caro, at least one of the rumors can be considered true.

Boca Juniors is one of the best clubs in South America and the entire planet.

But I manage the affairs of the player, and today all Gaich's thoughts are connected only with CSKA.

Adolfo is happy in the Moscow club.

It should be noted that there is no talk of a full-fledged transfer of the striker.

In the summer, the army team signed a contract with Gaich for five years and are unlikely to be ready to give up the young Argentine on the move.

At the moment, only the option with a lease is being considered, but at the same time it is noted that a clause on the possibility of purchase may be included in the agreement.

In addition to Gaich, another attacking footballer can leave CSKA.

At the beginning of the year, the Icelandic edition of DV published an interview with Arnor Sigurdsson, in which he hinted at a possible departure from the team.

The footballer expressed dissatisfaction with the lack of playing time and said that in the future he intends to evaluate his position in the team.

The army men themselves are still much more concerned about the acquisition of a defensive midfielder.

After the departure of Pontus Wernbloom, the red and blue could not find a worthy replacement for him and, apparently, will try to fix the situation in the winter.

According to the Israeli portal Walla !, several players of this role are in the sphere of interests of CSKA, and the invitation of the 24-year-old captain of Maccabi Haifa Neta Lavi is considered the most priority.

The midfielder made his senior football debut in 2015 and since then has played 105 matches in the national championship, and has also defended the national team colors four times.

It is noted that negotiations with Maccabi are not going well so far, and the Israeli club does not intend to let Lavi out on loan.

In this regard, the red and blue are considering other candidates, among which there are Hungarian Adam Nagy from Bristol City and Czech Lukasz Kalvah from Victoria Pilsen.

However, the English team hastened to refute information about negotiations with the army team.

“We cannot confirm that CSKA is interested in Adam.

This is not true yet, "said Sport-Express.