Tilde Johansson about her heavier 2020: “Perhaps positive that the Olympics were postponed

Tilde Johansson broke through as an 18-year-old last year with a new Swedish junior record and was only five centimeters from the World Cup final. 2020 has been heavier for the long jumper - who believes that the postponed Olympics may have benefited her. - Maybe it was only positive that it was postponed so I get another year of good training, Johansson says to SVT Sport. 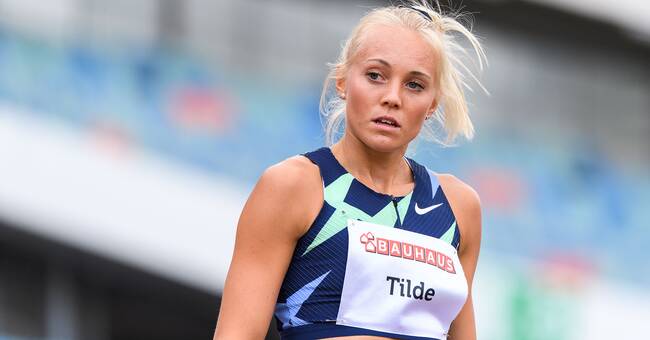 In July 2019, the then 18-year-old long jumper Tilde Johansson hit a jump of 6.73 in Karlstad, one centimeter longer than Erica Johansson's old Swedish junior record from 1992.

After that, the Falkenberg jumper continued to stand for long jumps and was selected for the WC in Doha.

There she was only five centimeters from qualifying for the final.

Most things pointed upwards for Tilde Johansson, but in 2020 it has been all the quieter about the now 19-year-old talent who this year has jumped 6.53 the longest.

- It has been a little tougher, Johansson tells SVT Sport.

- Both the indoor season and this summer, I have not managed to get the form I had in 2019. So it is clear that it has been a little tougher mentally, when you really break through and have expectations and then you do not manage to do what you really know that you can.

- But it has been a special year and not the most important year, so if it is ever going to be a bit difficult, it suited well this year.

Was it a bit like that, with the coronavirus and a postponed Olympics, that it became a bit of a middle ground?

It has not been this topping that one otherwise tries to get to the most important competitions.

So it has become a little more intermediate milk of everything.

Surprised by the breakthrough

- It was cool, especially when I did not expect it myself.

It was completely unexpected.

It was a bit like you could not take it in immediately, but afterwards you understand how far I jumped.

I did not really understand that then.

What was it like to enter this season given the breakthrough last year?

- You had a little more expectations of yourself from the outside, and also of yourself.

Because it was not like I just did a good competition but there were three, four pieces at 6.70 level.

But I did not really get up to that level this summer so it's clear you're thinking about what you did wrong.

Trained harder after the Olympic announcement

Given that the Olympics in Tokyo were postponed until 2021, the structure for 2020 was changed for Tilde Johansson.

- We have changed the training a bit and run a little tougher than the idea was.

Then ranking points did not matter so it made me end the season a little earlier than I otherwise would have done.

What was it like getting the news that the Olympics were postponed?

It was my big goal this summer but at the same time the season did not start well and the winter did not go as I wanted, so maybe it was only positive for me that it was postponed, so I get another year of training that can only benefit me think I.

Is the Olympics the big goal for you right now?

I have not qualified yet so I am absolutely not sure I will get to go, but I will do everything to get there and give it a chance.

The qualifying limit for qualifying for the long jump in the Olympics is 6.85.

Therefore, the indoor season 2021 will be extra important for Tilde Johansson in her search for an Olympic venue.

- I will try to compete as much as possible.

It is important to get ranking points for me if I do not pass the qualifying limit.

I'm right under there so it's important to get into good competitions and jump far on those who give a lot of points.

I really long to train.