Ittihad Kalba team proved its eligibility to occupy an advanced position on the Arab Gulf League’s ranking list for football, after it tied against Al-Wehda without goals yesterday, in the tenth round, which witnessed the absence of Kalba’s superstar striker of Togolese Bennel Malaba. 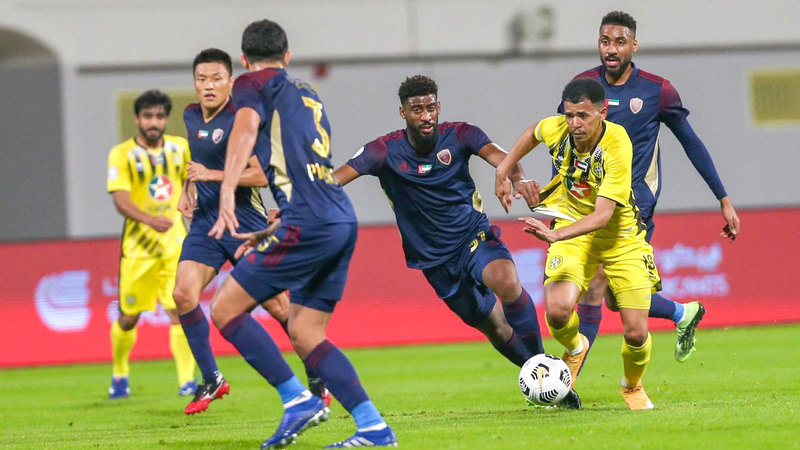 He imposed himself as the best party in the confrontation

Attack of the Kalba Union towards the goal of the unit.

Ittihad Kalba team proved its eligibility by occupying an advanced position on the Arab Gulf Football League standings, after it tied against Al-Wehda without goals, yesterday, in the tenth round, which witnessed the absence of Kalba striker Bennel Malaba.

The "Tigers" were the best party in all the course of the match, gaining access to the goal of unity and the most dangerous attacks, but he was in dire need of the player Malaba "administratively suspended" to translate the opportunities into goals, especially with the decline in the performance of the unit, which did not threaten Kalba's goal with only one attempt.

With this result, Ittihad Kalba scored 17 points in fifth place, while Al-Wehda ranks eighth with 15 points.

The first attempt by Ittihad Kalba was through its Brazilian player Anderson, who fired on the fly over the crossbar against the goal in an easy opportunity (5), wasting a sure goal.

The Tigers overcame a sure goal opportunity after Al-Wahda goalkeeper Muhammad Al-Shamsi confronted a powerful ball shot by Ahmed Amer (13), and the match referee, Muhammad bin Khadim, returned to video technology to face the possibility of a penalty kick for Al-Wehda after unintentionally touching the ball by the Tigers player Antonio, but he found it did not rise For a penalty kick, the unit's beam responded with a ball to the player himself inside the penalty area (35).

Although Ismail Matar participated in the match as a substitute, Al Annabi’s attacks remained ineffective and did not pose a threat to Kalba’s goalkeeper Jamal Abdullah.

The unit's guard, Muhammad Al-Shamsi, interfered with two dangerous balls in two attacks, during which he removed two balls that were shot by Antonio and Abdul Salam Muhammad (56 and 57).

The most dangerous attempt at unity was the ball that was shot by Robin Philippe, the Portuguese goalkeeper, Jamal Abdullah, to bounce off the crossbar (79).

And Anderson hit a surprise ball that passed alongside the unit stand (90), to which Ismail Matar responded with a shot that Jamal Abdullah grabbed (99 + 2), after which the match ended with a goalless draw.