The visit of the Israeli League League delegation to the country was concluded yesterday, headed by Erez Khalfoun, President of the Israeli Professional League, and the membership of Nicholas Lev, Executive Director, and Mottie Bronstein, in charge of commercial relations and marketing, and lasted for three days, and witnessed a series of meetings. 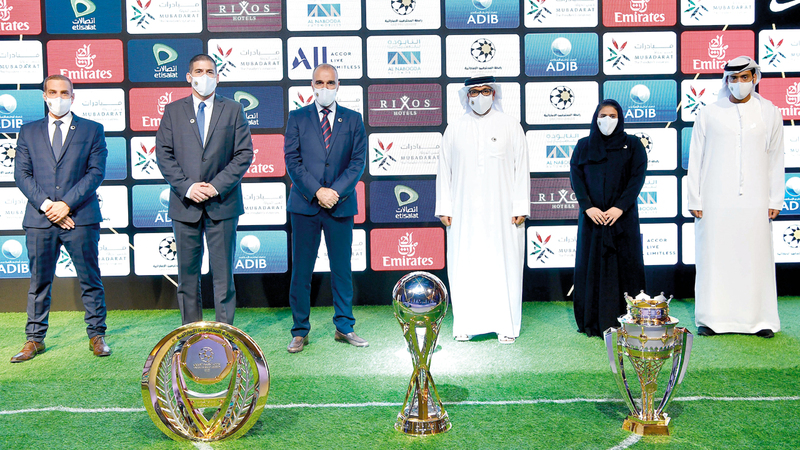 After several meetings during a 3-day visit

Yesterday, the visit of the Israeli League delegation to the country, headed by Erez Khalfoun, President of the Israeli Professional League, membership of Nicholas Lev, Executive Director, and Mottie Bronstein, Head of Commercial Relations and Marketing, concluded yesterday and lasted three days, and witnessed a series of meetings and workshops organized by the UAE Professional League within the framework of Activating the partnership relationship with the Israeli side, and discussed many marketing, technical and technical matters between the two sides.

The guests also gave an introductory explanation about the professional league there, which consists of 14 teams other than the 16 teams that make up the First Division, in addition to everything related to the Israeli League, including marketing, sponsorship and others.

The activities of the workshops with the Israeli delegation were attended by: Abdullah Nasser Al Junaibi, President of the Emirates Professional League, Saeed Obaid Al Kaabi and Jawahar Abdulaziz Al Suwaidi, members of the Association’s Board of Directors, and Dr.

The Israeli delegation praised the great development in the Emirati professional system, especially the successes that they described as great, whether in marketing, sponsorship and partnerships, or in the league’s superiority in the Asian licensing system that matches European standards, and making the UAE league at the forefront of the professional leagues in the continent in terms of club licensing standards, other than development in Ongoing technical and technical aspects of Emirati football in general.

This visit is considered the start of the formal activation of the partnership agreement between the two sides, which aimed to exchange experiences, display the achievements and successes achieved, and the meetings and workshops held over the past two days have promoted fruitful discussions in various fields related to football and the professional league.

For his part, Al-Junaibi expressed his happiness with that visit, which marks the beginning of a new phase of cooperation in the sports field, specifically in football, and discussed developing it in a way that serves the two countries, stressing that the memorandum of understanding that was signed opened the door for more opportunities for communication not only at the level of events and activities. But also at the level of sports relations, building bridges of mutual relations, especially with regard to partnerships and clubs, and opening new horizons for the sporting future.

Al-Junaibi welcomed the Israeli delegation, and said: “We are happy to start the partnership with the Israeli side, and our goal is to strengthen relations and exchange experiences in the field of professional football. The workshops have witnessed great efforts for the success of these goals, especially since this visit has many benefits and aspects of cooperation on The short and long term was discussed during the meetings that were held between the two parties.

Al-Junaibi pointed out that the UAE is a land of tolerance and humanity, and it welcomes all nationalities and countries of the world on its soil, and the presence of the Israeli football delegation for the first time and holding bilateral workshops has achieved many common benefits, which will be a real start in the future.

He added, "The UAE represents the world's kiss in various fields, and therefore we seek to promote this concept also in football and the professional league, as we have strong relations with most countries, and activating partnerships and exchanging experiences is one of the most important ways to advance the professional system."

For his part, Erez Khalfoun, President of the Israeli Professional League, praised what he saw on the ground during that visit of the outstanding successes of the work of the Emirati League, and all its committees, especially after reviewing the various technical, administrative, organizational and marketing projects, and said, “We are happy with this visit. To the United Arab Emirates, and we thank the UAE Professional League for the warm reception and great interest in cooperating with us in all fields. It is certain that signing the agreement and then starting to activate it at this speed and pace, will be in the interest of both parties in light of the development that Emirati football is experiencing through the portal of the professional league.

He explained that the visit had a positive and rapid outcome in order to build a bridge between Israeli football and football in the UAE, and said, “We have great ambitions that we seek to achieve in this joint cooperation, we have seen many successes in the Emirati experience, and what happened during intensive workshops. It is just the beginning of a real cooperation in the future. ”

• Happy to start the partnership, and our goal is to strengthen relationships.

The Emirati experience in professionalism is distinguished.