"Peerless double pride" fell in love and killed each other for more than ten years, this is the most beautiful football time

Chinanews client, Beijing, December 9th (Reporter Zhang Yifan) Where there is football, it is often accompanied by "gunsmoke" and hostility. When the players stand on the green field, this kind of hostility is often more exciting.   If there is no Messi and Ronaldo, perhaps the football of this era will look dull. In the early morning of December 9, Beijing time, in the final round of the Cha 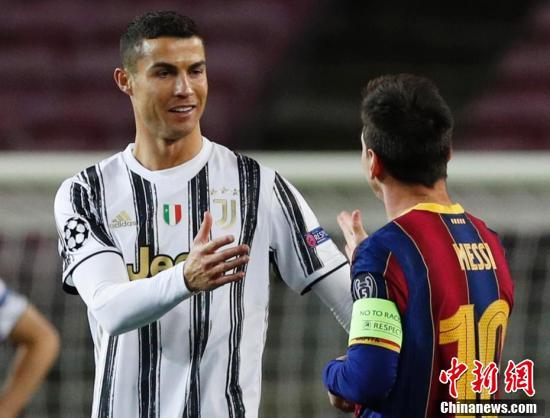 Chinanews client, Beijing, December 9th (Reporter Zhang Yifan) Where there is football, it is often accompanied by "gunsmoke" and hostility.

When the players stand on the green field, this kind of hostility is often more exciting.

If there is no Messi and Ronaldo, perhaps the football of this era will look dull.

In the early morning of December 9, Beijing time, in the final round of the Champions League, Group G ushered in a Melo match.

And this game is the first time that Cristiano Ronaldo has left La Liga.

In the end, Juventus defeated Barcelona 3:0 away.

In the past ten years or so, we have witnessed Messi sealing his throat with one enemy, five and one sword.

Standing on the top of the football world, they talked and laughed, making countless powerful enemies come back.

Years make people grow old. In the eyes of everyone, Messi or Ronaldo is far away from the era when they changed the game by themselves.

This game is the first time that Ronaldo has met since he left La Liga.

Cristiano Ronaldo has left Real Madrid for more than two years, and Messi’s days in Barcelona may be numbered.

This ordinary UEFA Champions League group match in the early hours of the 9th Beijing time is undoubtedly a potential "last dance" for the two on the same stage.

Just like two young swordsmen who were born out of nowhere and astounded the world. They met their opponents all their lives, often discussing swords for who is the best in the world.

People often think that they are each other's mortal enemies, immortal.

Little did they know that the two were friends and foes, and they cherished each other. When they retired to the world, they might even sincerely send each other a belated hug.

In the end, Juventus qualified as the group leader.

The 36th matchup between the two superstars ended with the victory of Juventus led by Ronaldo.

Are they really old?

On the same night in February this year, Messi, who suffered four league ball shortages, once declared his return with a big four. On another stadium, the 35-year-old Cristiano Ronaldo created 11 consecutive games in the 1,000th game of his career. The record of goals scored in Serie A.

The two superstars seem to be trying to tell the world with their actions that the current football is still their "twosome".

The 36th duel between the two superstars ended with the victory of Juventus led by Ronaldo.

The flowing water "third in the world", the iron-struck Melo.

After sending away batch after batch of challengers, the two of them are still sitting on the throne of football.

Just imagine, if there is no Melo, perhaps these challengers can be enough to hold up an era.

In other words, it was the blazing sun and the bright moon in the sky that made the sky full of stars dim.

Cristiano Ronaldo's Juventus won this morning and will also be the first in the group to qualify.

But just as the two sides have met in two rounds this season, there will be wins and losses for each other.

In the career of peerless double pride, no one has ever really overwhelmed each other.

Juventus defeated Barcelona 3-0 in the away game, Cristiano Ronaldo scored twice on a penalty kick, Messi misfired, and Juventus eventually qualified as the group leader.

Messi won 16 games, and Ronaldo had the last laugh 11 times.

This is the perfect script that God has given them. There is no real winner.

Or maybe, both are winners.

As Ronaldo said, "Messi and I have a very friendly relationship. We have met at major award ceremonies for twelve or three years. I have never regarded him as a competitor. These are all made by the media. We have been getting along very well, and if you ask him this question, he will give the same answer."

Nevertheless, when both sides stand on the same court, they tend to be more focused and dedicated than usual.

The scene in the game was moving.

Messi pierced through the crotch and broke into the penalty area. Ronaldo, who returned to the defense, broke the ball. The 36-year-old Portuguese flew several dozen meters to clear the ball. West can stimulate Ronaldo's high fighting spirit.

Perhaps many years later, when old fans recall this generation of football, they will proudly say that they have not witnessed the amazing talents of Pele and Maradona, but we have two of the best in history.

They did not hold up, nor did they need to hold up the enchanting Hercules Cup, but we live in the best era of football.

Ronaldo celebrated in the game.

Counting from the first direct match in 2008, Messi Ronaldo has been regarded as a pair of mortal enemies by the outside world for more than ten years. Although the two did not have any personal relationships, they did not even have a private appointment together, but the two of them have been both to each other. There is sincere respect.

Because of the epidemic, the Champions League cancelled the handshake session, but before the game, Messi and Ronaldo deliberately found each other.

For them, there is no helplessness of "Since Yu Sheng, He Shengliang".

The two embraced momentarily before the game.

The scenes of each other's greetings were recorded by countless cameras, and the two people were in the same frame again.

At this moment, there is no "Mei Hei" nor "Luo Piu", only the peerless double pride and the best football time in the hearts of countless people.