PSV ahead against Granada, AZ misses a penalty against Napoli

Good evening and welcome to this live blog! Here we, Jeroen van Barneveld and Robbert van der Linde, will keep you informed of the matches in the Europa League. LIVE: AZ-Napoli 1-1 Granada-PSV 0-1 Rash: Feyenoord-Dinamo Zagreb 0-2 Granada-PSV a few seconds ago 60 'PSV gets away well! Granada puts the Eindhoven team under increasing pressure and is close to the equalizer via a header from Machí

Granada puts the Eindhoven team under increasing pressure and is close to the equalizer via a header from Machís.

The ball skims past the wrong side of the post for Granada and goes wide.

AZ-Napoli · a few seconds ago

The AZ captain, usually a certainty from the dot, sees his bet turned in the left corner by Napoli goalkeeper David Ospina.

The Colombian taps the ball against the post with his fingertips.

57 'The whole of PSV is startled when the referee whistles after a triple collision between Mvogo, Dumfries and Suárez in the Eindhoven penalty area.

However, the referee whistles for a violation by the Granada player.

Dumfries remains injured for a while, but has more pain than damage and can continue.

Zakaria Aboukhlal is knocked over in the Neapolitan penalty area and the referee is in no doubt.

He points to the dot.

Does Teun Koopmeiners AZ put the lead from 11 meters?

The moment when the hearts of Alkmaar jump.

Bruno Martins Indi escapes offside and taps in the equalizer with his heel.

55 'Götze lightly gets rid of two opponents and finds the rising Dumfries.

The shot from the right back is not bad and has to be blocked by Silva.

After the break, PSV continued on the same footing as in the first half.

There is the coveted equalizer for AZ against Napoli.

Teun Koopmeiners decides to take a shot directly from a corner kick by Fredrik Midtsjø and on the way the ball is touched with the heel by Bruno Martins Indi.

Napoli goalkeeper David Ospina can no longer do anything about that.

He still complains for offside, but the repetition shows that Martins Indi is just in front of the last defender.

A valid goal, so.

AZ's right winger has the equalizer for the shot in when a cross from the left shoots through and lands in front of his feet, but he is aiming in the stands.

For the third time tonight, Peter Bosz takes the lead with Bayer Leverkusen.

Can the Germans keep this lead, or can Nice come alongside again?

51 'Marco Bizot has to take action when the rising left back Owen Wijndal breaks down on the Neapolitan defense.

From the subsequent counterattack, Napoli-back Faouzi Ghoulam has plenty of time to deliver a good cross, but he finds Bizot's hands.

A happy Donyell Malen is already celebrating his fourth European goal of this season.

Trainer Peter Bosz has to deal with a downer with 'his' Bayer Leverkusen shortly after the break.

He sees his goalkeeper Lukás Hrádecky foul on a free kick, allowing Dan Ndoye to equalize in France in the rebound.

What are Philipp Max and Denzel Dumfries all about here?

PSV has an excellent opportunity to take three points from Granada.

The ball rolls in Alkmaar for the second half of AZ-Napoli.

Can AZ do anything about the 0-1 deficit against Napoli?

Or do the Neapolitans push on?

At Benfica, a well-known name works on the score sheet in the first half.

It is Jan Vertonghen, former player of Ajax and RKC Waalwijk.

The Belgian heads the Portuguese superpower from a corner kick against the Polish Lech Poznan.

PSV are playing a strong first half on a visit to Granada and has a deserved lead halfway through with 0-1.

Donyell Malen is responsible for the only goal so far, by tapping in on a pass from Philipp Max.

The Eindhoveners do lose Noni Madueke with an injury.

His replacement Eran Zahavi has the greatest chance of doubling the margin, but sees Vallejo deprive him of that chance.

These drooping shoulders symbolize the AZ of the first half against Napoli.

The Alkmaarders play along nicely and create some possibilities here and there, but they are not as deadly effective as the Neapolitans.

A goal by Dries Mertens left the visitors with a 0-1 lead to the Alkmaar tea.

44 'Another possibility for AZ, which has now weathered the Italian storm.

43 'Zahavi is close to 0-2, but Vallejo is just in time to prevent the substitute from shooting a cross from Gakpo.

PSV can do extremely good business in Granada and seems to realize that itself.

PAOK will visit Omonia again at the same level.

Christos Tzolis, who also scored against PSV in Eindhoven, sweeps the ball into the goal after a genuine tikitaka attack.

There is the lifeline for AZ, because NHK Rijeka surprisingly takes the lead against AZ's competitor Real Sociedad.

Darko Velkovski heads in from close range from a corner.

PSV deserves to take the lead through an excellent attack.

Philipp Max comes through over the left whistle and finds Donyell Malen with a gossamer cross.

The striker turns up between two opponents and taps the ball through Rui Silva's legs.

38 'Eran Zahavi comes within the lines sooner than expected.

The Israeli relieves Noni Madueke, who cannot continue due to an injury.

33 'Herrera heads a cross from Machís on the post, but is also called off because he pushes Boscagli in the back.

It is the first time that Granada has reported really threatening in the vicinity of Mvogo.

OGC Nice has not yet reached the same level via Hassane Kamara or Bayer Leverkusen is back in the lead in Nice.

Keeper Silva can therefore easily pick the ball from the top corner.

27 'Götze slips past Germán and is then held by the captain of Granada.

The Spaniard is banned, while PSV gets a free kick in a promising place.

A Neapolitan corner shoots dangerously towards the far post, where goal scorer Dries Mertens is concealed.

However, the Belgian striker reacts just too late to put his foot against the ball.

24 'PSV is the parent party in the first quarter, although the Eindhoven players cannot yet separate the close defense of Granada.

The greatest chance comes about by chance for Malen, who shoots next to it.

Trainer Peter Bosz is with Bayer Leverkusen with one and a half legs in the knock-out phase of the Europa League, because the Germans take the lead over competitor OGC Nice.

Moussa Diaby taps in a high pass from close range.

21 'There is the first real chance of the match.

Gakpo wins a header game and gets the ball at Malen.

The attack leader immediately lashes out, but does not get the ball full.

Partly because of this, his bet just misses.

20 'Zakaria Aboukhlal fails to liven up his surprising starting place with a goal.

The attacker gets the ball from the edge of the penalty area and immediately hits with his left, but goalkeeper David Ospina has an answer.

AZ is regaining some grip on Napoli.

20 'Götze puts the ball behind the defense of Granada with a lot of feeling.

The rising left back Max can reach it, but does not take it well, so the opportunity is lost.

16 'AZ is no longer involved after the opening goal by Dries Mertens and is chased in all corners by the eager Napoli.

The Alkmaarders have to come up with something else, because combining in this way makes little sense.

15 'The opening phase in Andalusia is certainly not to write home about.

PSV has a slight predominance, but it often lacks the final pass.

Granada is happy to leave the game to the people of Eindhoven.

Dries Mertens clenches his fist after his opening goal for Napoli against AZ.

The Alkmaarders are now faced with a very difficult task and must hope that Real Sociedad does not win at HNK Rijeka, otherwise it will be the end of the Europa League story for the team of trainer Arne Slot with a defeat against Napoli.

Omonia Nicosia-PAOK Saloniki one hour ago

Good news for PSV, because in the other match in the group Omonia Nicosia takes the lead against PAOK Saloniki.

Andronikos Kakoulis scores from the rebound, after goalkeeper Zivko Zivkovic has to release a difficult bouncing ball.

At this stand, PSV keeps PAOK and Omonia behind in the group anyway, regardless of their own result against Granada.

Napoli comes for the first time in front of AZ's goal and it is immediately hit in Alkmaar.

Dries Mertens gets rid of his warder Pantelis Hatzidiakos and taps in a cross from the rising right back Giovanni Di Lorenzo.

The former FC Utrecht and PSV player points directly to heaven, as a tribute to club legend Diego Maradona, who passed away last week.

3 'AZ is furiously off the starting blocks and creates a new opportunity via Calvin Stengs.

The right winger dribbles past two players from Napoli and lashes out with his left, but the shot is cracked in time.

Napoli does not know what to do with the Alkmaar Zaanstreek combination.

1 'PSV is soon threatening, but Götze's pass is just too sharp for Madueke.

The young Englishman would otherwise have free passage to the goal of Granada, which would have been a lightning start.

1 'What an opportunity for AZ!

After nine seconds it is almost hit for the Alkmaarders.

Teun Koopmeiners pips the ball forward after kick-off and finds the sprinting striker Albert Gudmundsson, who hits goalkeeper Ospina from the back line. 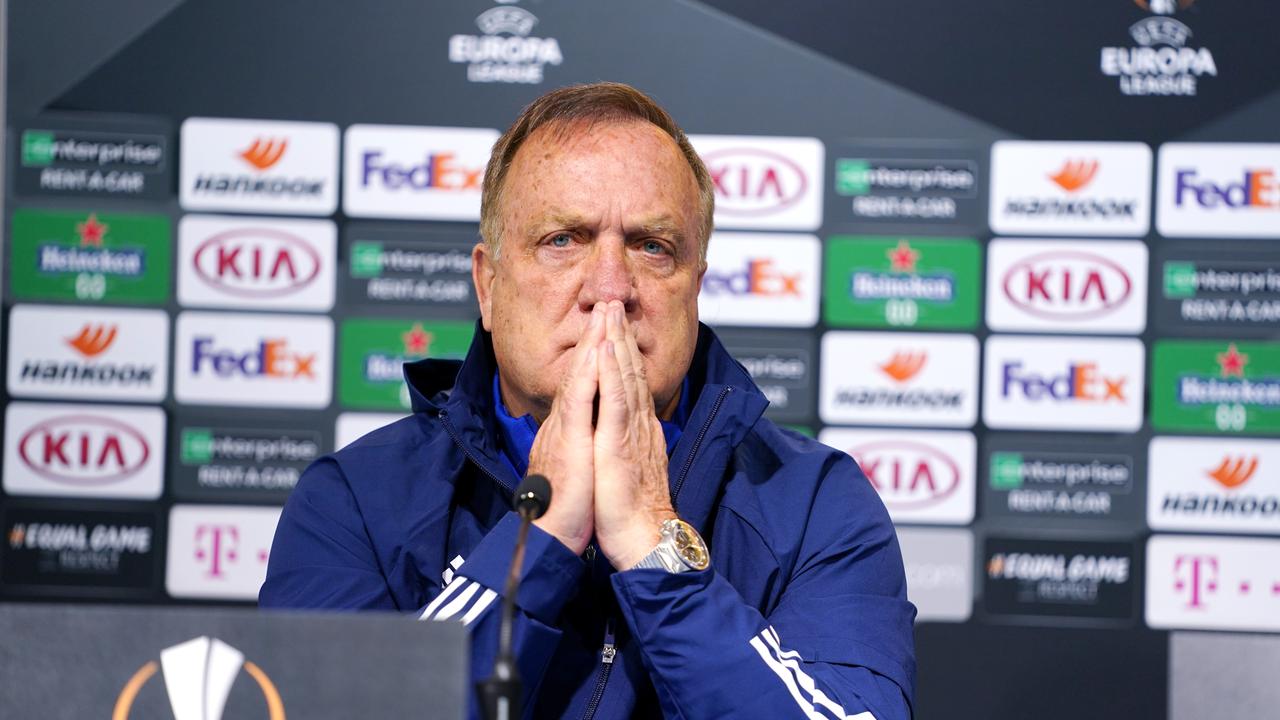 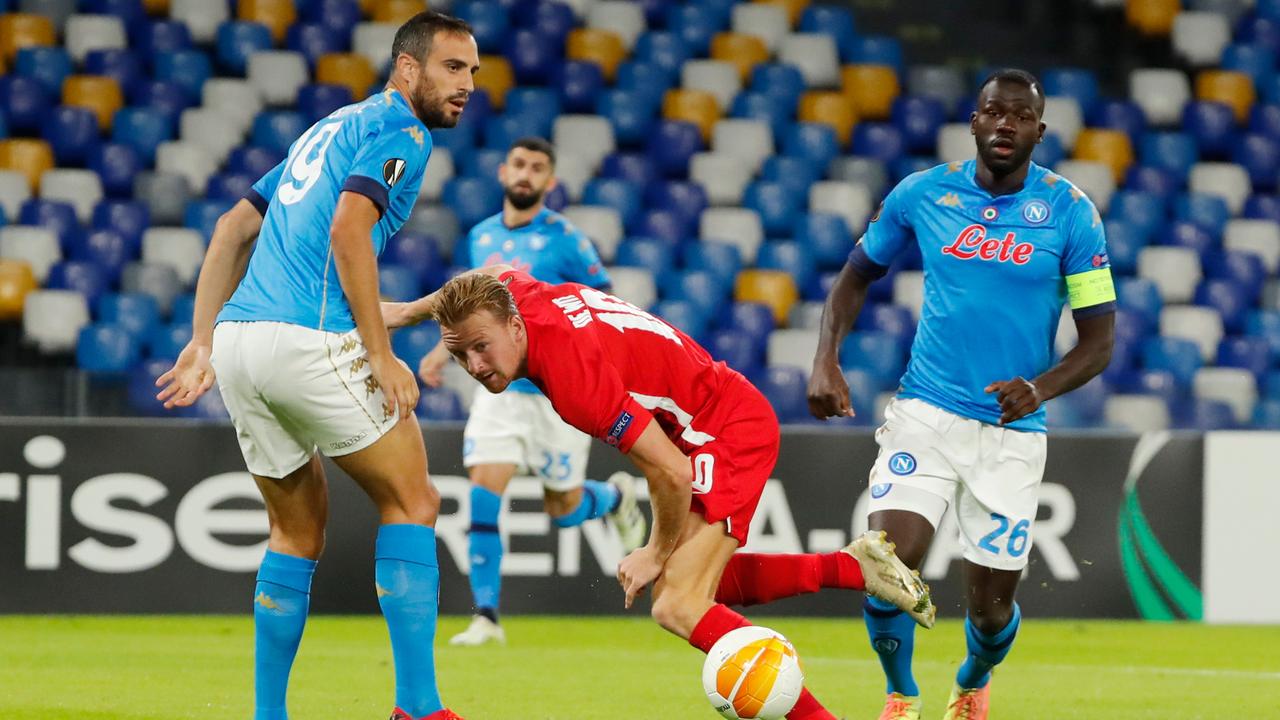