Chinanews.com, November 22. The week-long 2020 ATP year-end finals are about to come to an end. In the two men's singles semi-final contests last night and this morning, Tim 7:5/6:7(10)/7 :6(5) defeated Djokovic and reached the final for two consecutive years; Medvedev reversed 3:6/7:6(4)/6:3 and completed his first career victory against Nadal. The giants have smashed, and Tim and Medvedev will 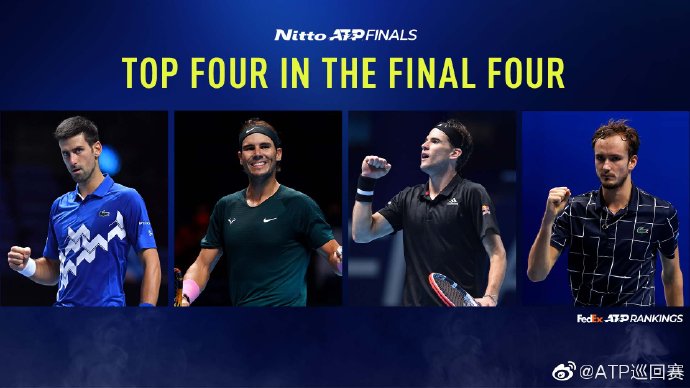 Chinanews.com, November 22. The week-long 2020 ATP year-end finals are about to come to an end. In the two men's singles semi-final contests last night and this morning, Tim 7:5/6:7(10)/7 :6(5) defeated Djokovic and reached the final for two consecutive years; Medvedev reversed 3:6/7:6(4)/6:3 and completed his first career victory against Nadal.

The giants have smashed, and Tim and Medvedev will also be in the final stage.

The game between Tim and Druid was the first to start. In the first set, Tim broke serve in the 11th game at the end of the set. After securing the serve, he took the lead with 7:5 and led by 1:0.

The data given by the ATP shows that in the 2020 season, Tim's record after winning the first set is 21 wins and 1 loss.

In the second set, Xiaode almost lost directly, and the situation lasted until the final juncture of the tie-break.

When falling behind 9:10 in the tiebreaker, Djokovic saved the 4th opponent's victory point in the set, scored 3 points in a row, won 7:6 (10), and evened the big score.

When it came to the final set, the competition between the two sides became fiercer, and both of them were successful in the 12 rounds, and the game entered the tie-break again.

In the suffocating game of life and death, Xiaode broke serve consecutively and got a 4:0 dream start.

At the same time, this victory was Tim's 300th career victory.

After the game, Tim said of his hard-earned victory: "It is very special to reach the finals in the finals. After winning the first major championship at the US Open, I originally thought I should become more peaceful, but I guess This is a wrong idea, because I am still as nervous as I was in the past. This game has come to the edge of crisis many times, and every other game here is the same, because this is a duel between the best players in the world. This test made me incredibly happy, and I will prepare for tomorrow."

In the second semi-final of the ATP Finals, Nadal took the lead with 6:3 in the first set.

Although Medvedev lost 4 games in a row after leading 4:1 in the second set, he was still resolving the serve to win the game and pulled back a set 7:4 in the tie-break.

In the decisive set, the victory scale began to tilt towards Medvedev. After a 3:3 tie, he broke Nadal's two consecutive serving games and secured the victory with 6:3. He entered the championship game for the first time in his career. Tim fights for the championship.

After the game, Medvedev said: "Until his serve wins the game at 5:4 in the second set, I always felt a little strange. I played a lot of good shots, but failed to show it in the score. . He performed better at the critical moment, but my performance was not satisfactory. Then I decided to make some small changes. I stood a little bit forward and performed a little more proactively. My tactics did not work, so I This change must be made and it finally worked, and I am very happy about it."

It is worth mentioning that this semi-final is the first time Medvedev defeated Spaniard Nadal in his career, and he has won nine consecutive victories from the Paris Masters to the ATP year-end finals in London.

In addition, the men’s doubles final match was announced with the end of the semifinals. Melzer/Roger Vaselin reversed the No. 2 seed Ram/Salisbury to enter the final and will compete with Kulhof/May Ketic vie for the championship.

With the defeat of the Ram/Salisbury combination, Pavich/Soares, who failed to qualify from the group, successfully secured the first place in the year-end doubles.

This year the two won the first Grand Slam championship after their cooperation at the US Open, and they have since won second place at the French Open and the Paris Masters.