Alligator on the Nurmagomedovs' golf course and graffiti in Derbent: sports events of the week

In Derbent, a ten-meter graffiti appeared in honor of the UFC champion Khabib Nurmagomedov and his father, and in Kunlun for the first time in the history of the KHL a woman was appointed as a serviceman. Tennis player Naomi Osaka starred in a video against racial discrimination, ex-skater Natalia Bestemyanova complained about her retirement, and a huge alligator appeared on a golf course in Florida. These and other sports events of the week are in the RT material. 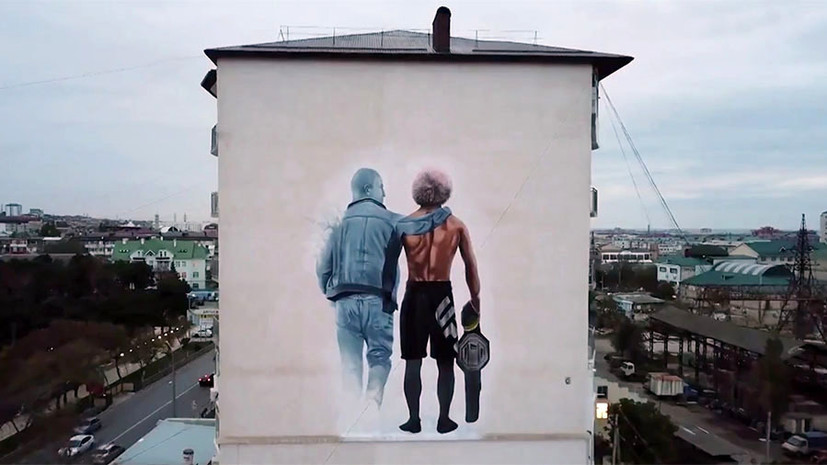 He was involved in organizing a financial pyramid.

After retiring in 2004, the footballer was engaged in entrepreneurial activities, hoping to get rich and even get on the Forbes list.

But in March 2015, he was arrested on charges of financial fraud.

At first, the ex-athlete was under house arrest, but a year later he was placed in a pre-trial detention center, where he was held for four years.

Thanks to this, he will have to spend about a third of his term in the colony.

Kharlamov has no serious sporting achievements.

However, Rubin's fans remember with experience how from 1999 to 2004 he took the team to the field as the captain.

According to the defender, he was forced to end his career by a conflict with Rubin's head coach Kurban Berdyev.

According to media reports, from 2011 to 2014, he received a total of € 570 thousand. The prosecutor's office accuses him of illegally concluding contracts in order to obtain property benefits and demands to be imprisoned for a period of 10 years.

The ex-goalkeeper himself denies his guilt, stating that he never had any intentions to rob anyone.

It is expected that the next meeting, which will consider his case, will take place in early December.

After completing his career in the NHL for the Philadelphia Flyers and Los Angeles Kings, the goalkeeper went into business.

But then he decided to return to hockey and currently expects to obtain a coaching license.

Graffiti in honor of Nurmagomedov and his father appeared in Derbent

In Dagestani Derbent, a ten-meter graffiti appeared dedicated to the UFC lightweight champion Khabib Nurmagomedov and his father and coach Abdulmanap Nurmagomedov.

The author of the original image is the artist Kode Abdo (creative pseudonym Boss Logic), who conveyed the significance of the victory of the Russian over the American Justin Gaji after the loss of a loved one.

And Vyacheslav Kamenskikh from Perm moved it to the wall of a multi-storey building at the request of local residents as a sign of respect to the famous countryman.

Nurmagomedov himself has already appreciated the portrait and even shared his photo on Instagram.

And former Bellator champion Michael Chandler said the work is a tribute to the fighter.

In Chelyabinsk, on the other hand, there was an unpleasant incident with another wall portrait of an MMA fighter.

Unknown persons painted it with black paint and left the inscription “Not our hero”.

It can be assumed that the act of vandalism was a response to the proposal of the deputy of the State Duma of the Russian Federation Gadzhimurad Omarov to confer the title of Hero of Russia on Khabib.

The uncle of the athlete, Nurmagomed Nurmagomedov, commented on the incident.

In his opinion, we are not talking about a provocation.

“Everything should be according to the law.

As the law says - it should be so.

Some are a hero, some are not.

Khabib is not officially nominated for the title of Hero of Russia.

Khabib is an athlete.

If it was written that he is not an athlete for us, then I would say that this is not so, "Sport24 quotes Nurmagomedov.

Osaka starred in an anti-racism video

Over the past few months, Japanese tennis player Naomi Osaka has become one of the most ardent activists in the sports world.

She refused to go to matches to protest police violence, talked about victims of law enforcement abuses, and called for the protection of black rights.

This time she took part in the advertising campaign of the famous company Beats by Dr.

The message of the video, called You Love Me, is that many people have a positive attitude towards black culture, while showing racism towards its representatives.

“You like the way I look: my hair, this skin.

We have to survive.

And we keep on fighting.

We continue to play while the world is on fire, and the rules of this game cannot be called fair, ”the video says.

In addition to Osaka, other famous personalities starred in it, including the American NASCAR racer Bubba Wallace.

In June of this year, he was at the center of a scandal after he announced that a rope with a noose appeared in his box.

By the way, according to the tennis player, she was impressed that the company raises the problem of racial inequality.

The first service woman started working in the KHL

Stephanie Klein has been appointed as the serviceman of the Chinese Kunlun Red Star.

She replaced the sick Dmitry Safonov and became the first woman in history to be responsible for equipment in a men's professional team.

The girl admitted that her hockey uniform attracted her as a child, when she herself went out on the ice as a goalkeeper.

Most recently, she has worked as a service man for two Women's Hockey League (WHL) clubs, although she has already helped college-level men's teams in Canada.

Interestingly, most of all she liked the stick of the Stanley Cup winner Alexei Kovalev, who is currently the head coach of Kunlun.

“I don't think I fully realized this yet (that I became the first female serviceman in the professional league. -

Maybe it happened when I looked at my phone after playing and didn't know what to do with all the messages!

It was nice to receive letters from so many people from all over the world.

I just hope that this will continue, and such things will no longer be something special, ”Klein quotes the KHL website.

Alligator took to the golf course

At various times, foxes, kangaroos, rabbits and even giraffes were seen on the lawns.

But the Valencia Golf Club in Florida was visited by one of the most unusual guests.

Visitors captured an enormous alligator crossing the lawn towards the reservoir.

Fortunately, it was raining that day and there were no athletes on the field.

Shocked social media users have compared the alligator to dinosaurs, Godzilla and other characters in science fiction films.

It should be noted that such alligators are quite common in Florida.

They live in local marshes and often overlook golf courses.

One of them, nicknamed Goliath for its size, became the hallmark of the club in Englewood some time ago.

Bestemyanova complained about her pension

The participation of the Olympic champion in ice dancing Natalia Bestemyanova in the Secret for a Million program caused a wide response.

As part of it, she spoke about the amount of the pension.

According to her, it is about 85-90 thousand rubles.

“I have so many worries, I miss it.

As for other benefits, in addition to this large pension, I have the title of "Veteran of Labor", and this allows me to pay less for electricity, electricity, and utilities.

And there is a social card that I use for free on all types of transport, including my favorite express train, ”Bestemyanova said on the air of the“ Secret for a Million ”program.

The ex-skater explained that the total amount consists of a regular pension and an increase for Olympic champions, introduced at the initiative of Vyacheslav Fetisov.

Of course, many were surprised and even outraged by the phrase that this was not enough for Bestemyanova.

Some Internet users recalled how much a "regular" pension is, while others advised her to cut costs.