The Sharjah and Al-Nasr teams are now in a suitable position to move away from the top of the Arab Gulf Football League standings, by a large difference from their chasers, before the winter transfers next January, in light of their strong contracts with foreign players, which they concluded before the launch of the league. 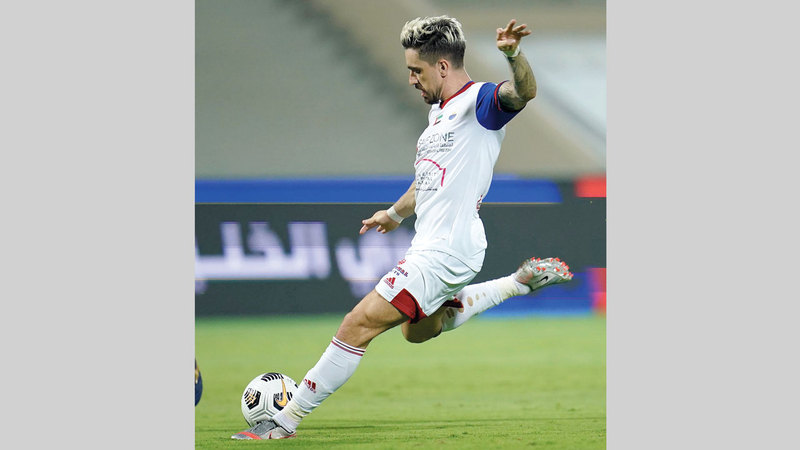 The Sharjah and Al Nasr teams are now in a suitable position to move away from the top of the Arab Gulf Football League standings, by a large difference from their pursuers, before the winter transfers next January, in light of their strong contracts with foreign players, which they concluded before the launch of the league, and it was the most expensive and strongest Among the 14 clubs, the competition for the Professional Club Championship title.

According to the German website "Transfer", which specializes in measuring the market value of players, clubs and national teams, the clubs of Sharjah, Al Nasr and Al-Ahly Youth concluded strong contracts, without fear of the future that could catch up with competition, which was reflected in the results of "the king" and "the general" in the ranking table. While the Shabab Al-Ahly team remains the only exception, as it is in fifth place with nine points, six points behind Sharjah.

"Al-Malik" occupies first place with 15 points (a full mark), while Al-Nasr continued its transfers, raising its points to 13 points in second place. It is noteworthy that the common factor in the victories achieved by both teams is the new deals it concluded during the summer transfer period. Among the 15 goals scored by Sharjah, 11 of them came through the new players, including five through Igor, who renewed his contract, while Al-Nasr scored 11 goals, six of them came through newcomers.

According to the German website, the value of the Sharjah player, Brazilian Igor Kornado, reached five million and 316 thousand dollars, after he renewed his contract with the club last month, and Igor's deal is the highest equally with Shabab Al-Ahly player, Brazilian Eduardo, who moved to the ranks of « The Knights », coming from Al Hilal Saudi Arabia, in a deal that the site valued at five million and 316 thousand dollars as well.

In turn, Al-Nasr club, who is searching for the league title for the first time in 34 years, specifically after its coronation in 1986, signed with the Israeli player, Dia Sabaa, from the Chinese Shanghai team, for three million and 50 thousand dollars, and the Cape Verdean team player, Ryan Mendes. From the Sharjah team for two million and 365 thousand dollars, in addition to the veteran Sebastian Tigali, coming from Al-Wahda in a deal that amounted to one million and 892 thousand dollars.

Sultan Hareb, a former board member of Al Wasl Club, told Al-Emarat Al-Youm that “the administrative and technical stability in both clubs (Sharjah and Al-Nasr) helped directly in the continuation of the implementation of the plans approved by the administrations of the two clubs, in order to obtain titles, Unlike other clubs that have been floundering in the implementation of their projects, and he considered that, in addition to technical stability and planning, Al-Tawfiq also had a role in the two teams' contracts that led to the current results.

He added: "The continuation and stability of teamwork between the components of the higher management, the administrative apparatus, the coach and the players, contributed greatly to concluding the required contracts, according to a correct vision, which is what the two teams are currently reaping benefits."

Hareb pointed out that other clubs, which did not maintain the technical stability in the teams, paid the tax of confusion in the recordings, whether in the technical apparatus or contracts with players, and said: “It is important to maintain technical stability, and to give adequate opportunity to the national coach in some clubs, Similar to the great success that coach Abdulaziz Al-Anbari presented with Sharjah, in addition to benefiting from the opinions of the sports directors in the clubs.

The most expensive 4 contracts for Sharjah

The most expensive 4 winning contracts

• "Transfer": Igor's deal is the highest, on par with Al-Ahly youth player Eduardo, who moved from Al-Hilal to Al-Fursan.