Miranchuk's debut goal for Atalanta and Shakhtar's away win over Real Madrid: what will be remembered for the 1st round of the Champions League

Oleksiy Miranchuk scored his debut goal for Atalanta eight minutes after coming on as a substitute in the match against Midtjylland. Shakhtar won a sensational victory over Real Madrid in Madrid. Bayern Munich left no chance for Atlético. And Liverpool beat Ajax in Amsterdam with a minimum score. RT talks about the main events of the Champions League game day. 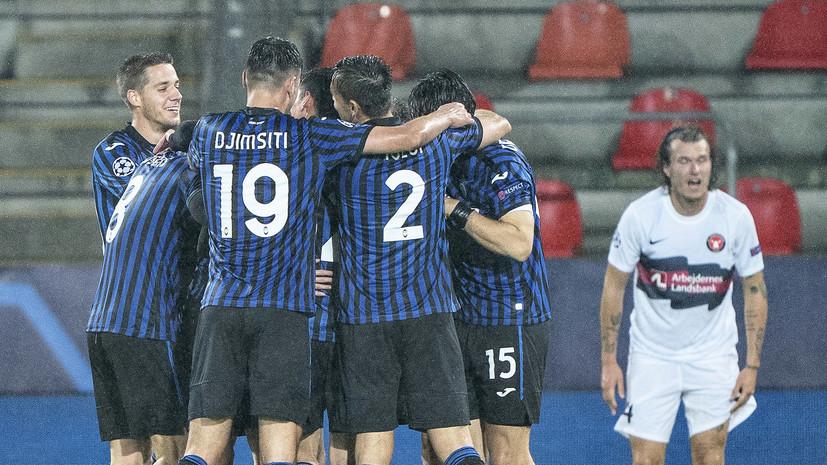 Before the start of the Champions League matchday, few could have imagined that one of the biggest results would be recorded in the Bayern - Atlético match.

Of course, the Munich players, as the current trophy holder, were considered favorites, but it seemed that Diego Simeone's unyielding wards would at least give them a fight.

However, in fact, the fight in this meeting did not work, and Madrid conceded four unanswered goals.

The guests kept their gates intact until the 28th minute, until the account was opened by Kingsley Coman.

And shortly before the break, the Frenchman gave an assist to Leon Goretzka.

At the beginning of the second half, Atlético came to his senses and created a couple of dangerous moments at the gate of Manuel Neuer.

And soon Bayern finished off the opponent with two accurate shots.

First, Corentin Tolisso delivered a magnificent blow from afar, and then Coman issued a double.

So Munich started the new season of the Champions League with a defeat and extended their record winning streak in the tournament to 12 matches.

In addition, the German team scored four or more goals in the 20th meeting under the leadership of Hans-Dieter Flick, although he has been leading the team for less than a year.

Next week, the Bavarians will play away with Lokomotiv.

Scoring by Shakhtar and Inter despite coronavirus

Zinedine Zidane's charges at home managed to yield to the Ukrainian Shakhtar - 2: 3.

The Pitmen's victory looks even more unexpected considering that they arrived in Spain without a dozen key performers who were out of action due to the coronavirus and various injuries.

The opponent also had losses.

First of all, the match was missed by the captain Sergio Ramos, without whom the creamy suffered seven defeats in the last eight matches of the Champions League, and Karim Benzema remained on the bench and appeared on the field only after the break.

Despite this, everyone expected the Madrid team to win over Luis Castro's charges, whose starting line-up included only four players over 21 years old.

However, the first half turned out to be absolutely disastrous for Real.

The Pitmen carried out many dangerous attacks at speed and easily found free zones in the hosts' half of the field.

The defense of Madrid in the absence of Ramos could not cope with the pressure and crumbled before our eyes.

As a result, even before the break, the Ukrainian team scored three times.

As part of the guests, the alien gates were struck by the Brazilian Tete and the Israeli Manor Solomon.

And Madrid defender Rafael Varane scored his own goal.

Creamy missed three times in the first half of the Champions League home game for the first time in 20 years.

However, Real would not have been Real if in the second half of the meeting they had not tried to return to the game.

Immediately after the break, Zidane's charges pressed the opponent to the goal and scored two goals within six minutes.

First, Luka Modric scored with a beautiful long-range shot, and then, substitute Vinicius Junior, with the first touch, cut the backlog of Madrid to a minimum.

The hosts had plenty of time to recoup and even snatch victory, but they failed to hit the gates of 19-year-old Anatoly Trubin for the third time.

More precisely, Federico Valverde leveled the score in the second added minute after a corner kick, but the referee canceled the goal due to Junior's offside position.

Inter has also faced the outbreak of coronavirus ahead of the start of the Champions League group stage.

Literally on the day of the game with Borussia Mönchengladbach, the club announced another sick person - defender Ashraf Hakimi.

Alessandro Bastogne and Raja Nainggolan managed to recover, but remained on the bench.

Despite such serious personnel losses, the Milanese managed to reduce the game with Borussia to an effective draw - 2: 2.

Romelu Lukaku did everything for the current LE finalist to score points in the first round.

The Belgian opened the scoring at the beginning of the second half, and in the 90th minute saved Inter from defeat.

The forward, who scored seven goals in the last season of the LE, continued to hit the opponents' goal in the Champions League by inertia.

Lukaku extended his European streak to nine, in which he scored ten goals.

And for Russian fans, the main event of the day, in addition to the game between Lokomotiv and Salzburg, was the debut goal of the ex-railroad midfielder Alexei Miranchuk with Atalanta.

The very meeting of the Bergamasks with the Danish Midtjylland in Herning was devoid of intrigue.

Even in the first half, the Italian team scored three unanswered goals, after which they switched to the gameplay mode.

And in the end Gian Piero Gasperini decided to release Miranchuk, who had recovered from an injury, on the field for the first time.

And after eight minutes, Alexey became the author of a beautiful goal.

Having received the ball from Josip Ilicic on the line of the penalty area, with the second touch, the Russian neatly twisted it into the far corner along a path unattainable for the goalkeeper.

Even if we do not take into account the effective blow, the domestic athlete spent the time allotted to him as productively as possible and actively tried to interact with new partners.

As a rule, he received the ball a little to the left, but moved to the center and to the right flank, trying to fill the free zones.

We can only hope that this goal for Alexei is the first of many in Atalanta.

In the meantime, he became the 16th Russian footballer to score in the Champions League with a foreign team.

For Miranchuk himself, this goal is the third in his career in the main European Cup.

A much harder away victory over Ajax was won by Liverpool.

The reigning champion of England came to the Netherlands at once without two main central defenders Virgil Van Dyck and Joel Matip.

The first received a severe knee injury, and the second missed the meeting due to a minor injury.

As a result, nominal defensive player Fabinho and Joseph Gomez had to play in the center of defense.

The starting 45-minute turned out to be extremely difficult for the guests.

The hosts looked much sharper than their opponents and could have distinguished themselves more than once.

For example, after an hour of the meeting, ex-Spartak footballer Quincy Promes miraculously failed to outplay Adrian from close range.

If fortune turned away from Ajax in this situation, then Liverpool smiled a few minutes later.

How else but bad luck to explain Nicolas Tagliafico's curious own goal after Sadio Mane's cross.

The Amsterdamites continued to miss chances.

At the very end of the first half, Dusan Tadic, having thrown Adrian, was already preparing to celebrate the goal, but at the last moment Fabinho cleared the ball from the ribbon with a kick over him.

After the break, Liverpool managed to calm the game down in class.

Dangerous moments at the gate of Adrian practically did not arise, but the Lersisides could well increase the advantage in the score.

However, even one own goal of the opponent was enough for them to start with an important victory.

Meanwhile, within Group C, the undisputed favorite of this quartet, Manchester City, beat Porto at home - 3: 1.

At the same time, the Portuguese team managed to open an account already in the 14th minute.

The hosts defender Ruben Dias presented the ball to his compatriots, and Luis Diaz made an impressive pass through the entire other half and finished it with an accurate shot.

However, in the middle of the first half, Josep Guardiola's wards bounced back thanks to Sergio Aguero's accurate penalty kick.

The second goal of City was scored by Ilkay Gundogan after the break with a brilliant free-kick.

And the third was organized by the substitutes Ferran Torres and Philip Foden.

The only fly in the ointment for Manchester was the injury of an experienced defensive player Fernandinho.

The Brazilian entered the field in the 85th minute, but was injured in stoppage time.

According to Guardiola, a footballer can miss four to six weeks.

In another group match, Olympiacos beat Marseille with a minimum score.

Moreover, the Greek team snatched the victory in the 91st minute.

After the filing of 36-year-old former Dynamo midfielder Mathieu Valbuena, substitute Ahmed Hassan sent the ball into the wrong goal with his head.

At the same time, the Pireans for the first time managed to hit the opponent's goal at the beginning of the second half, but the referee, after watching the replay for a long time, canceled the goal of Georgios Masuras due to a small offside position.