Eder's goal, Guilherme's save and Lisakovich's successful substitution: how Lokomotiv drew with Salzburg in the Champions League

Lokomotiv drew with Salzburg in the Champions League group stage match - 2: 2. Eder and Vitaly Lisakovich scored goals for the railroad. At the same time, the Belarusian scored a goal six minutes after coming on as a substitute. In stoppage time, the Austrian team was close to snatching victory, but Marinato Guilherme managed to help his team out. 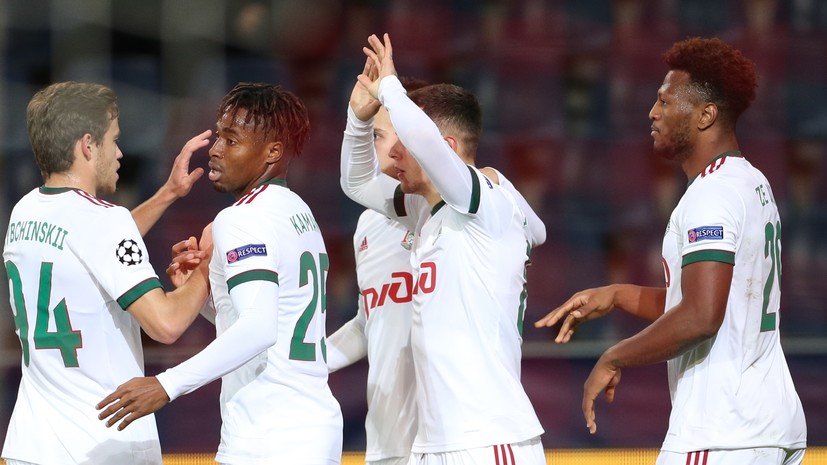 Exchange of "barbs" before the game

The confrontation between Lokomotiv and Salzburg in the Champions League began with a skirmish between the clubs' press services.

Representing the rivals in Group A on their official website, the Austrians called the railway workers "passengers".

They also allowed themselves to be ironic over Fedor Smolov as a strike forward of Loko and over the tactical scheme of the team's coach Marko Nikolic.

The status of a hopeless outsider given to Muscovites in advance angered their fans.

At the pre-match press conference, the captain of Loko Vedran Corluka was asked to speak on this topic.

Horvath admitted that he does not pay attention to such stories, but promised to give an answer during the game.

On the day of the match, Lokomotiv delivered a response text.

They decided to analyze the closest rival in a similar tone.

In particular, on the website of the red-greens, “Salzburg” was dubbed the “farm club of the German“ Leipzig ”, whose task is to bring promising young people to their senses and then send them to Germany.

Salzburg also remembered the fact that he won the championship title in Austria last season not least thanks to the removal of 12 points from the main rival LASK.

The American coach of the Austrians Jesse Marsh, in turn, showed awareness of Loko's staffing problems due to injuries and the coronavirus.

He added that railroad workers are an awkward opponent.

However, this meeting was not the first for Lokomotiv and Salzburg.

In 2009, the teams crossed paths at the training camp in Austria, and the railroad workers won the control meeting - 2: 0.

This time the intrigue was Nikolic's choice in the attack.

The Serbian specialist preferred the old-timer Edera to Ze Luis who was settling into the team.

In view of the low performance of the Portuguese, Loko fans took this decision with mixed feelings.

At a strange stadium with half-empty stands, the guests at first felt quite confident.

Already in the opening, they managed to organize a dangerous moment.

The second well offered himself in someone else's penalty area, and the first found a partner with a verified pass.

Miranchuk missed the best opportunity for a strike, but still struck.

But when it seemed that “Salzburg” took the initiative into their hands, Nikolic's team opened an account.

Miranchuk took a corner, Rifat Zhemaletdinov at the near post sent the ball to the center of the penalty area, where Eder was.

The headbutt performed by the Portuguese turned out to be perfect: Stankovic jumped, but could not reach.

The play of the set piece was clearly Loko's homework.

Including such episodes, one can judge how great Nikolic's contribution to the game of railroad workers.

Having missed, the hosts went ahead with large forces.

In one of the episodes, Mohamed Camara caught Marinato Guilherme on the opposite side.

The Loko goalkeeper saw the ball flying into the corner with his eyes.

Fortunately for the guests, the projectile passed centimeters from the bar.

But when the teams got ready to go on hiatus, it was the 19-year-old Hungarian who evened the score.

Well adjusted to the ball sent from the bottom from the corner of the field, Soboslai shot into the far corner.

The ball flew at a height unattainable for Guilherme.

After the break, "Salzburg" sharply increased the pace.

The guests were not ready for this and missed it.

The home team rolled the ball comfortably into the hands of Zlatko Yunuzovic.

The experienced midfielder shot straight away, and the ball touched Chorluka a little, which disorientated Guilherme.

After that, Seku Koita, having beaten Zhemaletdinov, hit the post.

There was an impression that Loko had run out of strength and things were heading for a rout.

To the credit of the red-greens, they managed to extinguish the enemy's activity and gradually calmed down themselves.

In the middle of the second half, Nikolic made two double substitutions.

First, Francois Camano and Dmitry Rybchinsky came out instead of the inconspicuous Smolov and the tired Zhemaletdinov.

Following in the game instead of Eder and Miranchuk, Ze Luis and Vitaly Lisakovich entered the game.

When there was a false impression that the guests did not think about the attack, they had a cool combination.

In her development, Kamano may have touched Masai Okugawa's leg, but the referee's whistle was silent.

From the Guinean, the ball went to Zhivoglyadov, who perfectly served to the far post.

Lisakovich, who was already on duty there, struck his head straight at Stankovich from several meters.

The goalkeeper did not keep the ball and fell into the goal with it.

A little later Lisakovich distinguished himself with a minus sign, spoiling another promising attack with a bad action. And already in stoppage time, Guilherme saved Loko after Patson Ducky came out one on one. Unlike Zenit, Nikolic's team did not concede “on the flag” and scored the first point in the Champions League. Lokomotiv's Twitter account could not resist poking up opponents: “Passengers, right, Salzburg?”