3 challenges facing Sharjah in the Asian champions ... most notably the lack of sensitivity to matches

Within days, the Sharjah team is preparing for its first official matches after a hiatus of nearly six months since last March. The kick-off will be for the team through the AFC Champions League, within the third group, which includes alongside it, the Saudi and Iranian Berrozi teams and the Qatari team Al-Duhail. 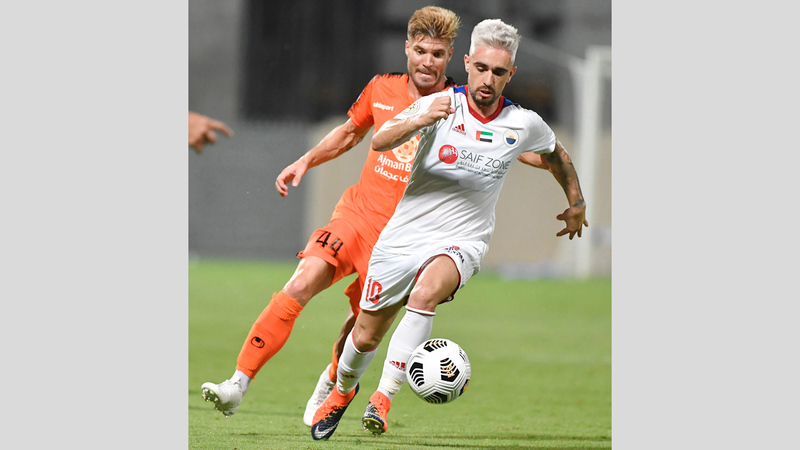 Tiger: The joining of Suarez saved the team from a big problem

3 challenges facing Sharjah in the Asian champions ... most notably the lack of sensitivity to matches

Sharjah recently organized a friendly four-way tournament with the participation of Ajman, Khorfakkan and Kalba clubs.

Within days, the Sharjah team is preparing for its first official matches after a hiatus of nearly six months since last March.

The starting kick for the team will be through the AFC Champions League, within the third group, which includes alongside it, the Saudi and Iranian Berrozi teams and the Qatari team Al Duhail.

The former coach of the Under-21 team in Sharjah said that the team will face three major challenges in the Asian arena, on top of which is the team's lack of sensitivity to matches.

He also said that among the challenges is the lack of necessary physical readiness, especially in what is known as "official matches", as well as the absence of a process of harmony and understanding between the players, especially between the new and old elements, because the team did not play enough matches to prepare as required.

He said that the case of Sharjah is the same as the case of other local teams, Al Ain, Al-Ahly and Al-Wahda, which will represent the UAE in the tournament, which will resume its activities next Monday, provided that Tuesday will be the date of Sharjah's first match against Al-Duhail.

Al-Nimr assured to "Emirates Today" that despite the current circumstances and the long pause in playing, nothing is impossible.

He said, "It is possible that Sharjah will overcome these difficulties."

And he considered that the joining of Brazilian striker Wilton Suarez to the team, coming from Al Wasl at the last moments before the deadline for the registration of players in the Asian list expired, in the wake of the injury of the new striker Jonathas saved Sharjah from a big problem.

He said that it is a step calculated for the club's management, which has sought to provide the appropriate environment for the team, so that it performs its role as required.

He also said: "A player's lack of sensitivity to matches greatly affects his performance, especially since the other teams facing Sharjah in the Asian Championship have completed their local leagues."

It is noteworthy that Sharjah lost in the first round at home to Saudi cooperation with a clean goal, and tied in the second round at home with Iranian Perseus 2-2, then in the third and fourth rounds he faced Al-Duhail Qatar, and in the fourth and fifth against Al-Taawon Perouzi.

He continued: “Although there was a kind of ambiguity to stop the sporting activity, the friendly tournament that Sharjah recently fought, which included Ajman, Kalba and Khorfakkan, greatly benefited the team, and through which the technical staff was able to see the players who were recently recruited, especially since the team attracted names Excellent players, such as Khaled Bawazir and Khaled Al-Dhanhani ».

He added, "I wish Suarez to return to his previous level, which he showed with Sharjah when he was contracted two seasons ago, and contributed to the final rounds of matches for the season before last, when Sharjah achieved the Arabian Gulf League championship."

Sharjah Club stated on its Twitter account that the defender of the first team, Al Hassan Saleh, is continuing the rehabilitation program under the supervision of the club's medical apparatus, following the surgery that was recently performed at the level of the left ankle, noting that the technical staff led by coach Abdulaziz Al-Anbari excluded the player from the list of 22 players to participate In the AFC Champions League.

"It has been decided to accompany the team on its Asian trip, with the aim of continuing training and reaching the required readiness with the start of the new season," Sharjah said on his Twitter account.

1- The team’s lack of “Rotem” and the sensitivity of official matches.

2- The lack of harmony as required between the players, especially between the new and old elements.

3- The players' lack of fitness for official matches due to insufficient preparation.

• Sharjah inaugurates its official matches after a long stoppage of playing next Tuesday in the AFC Championships.