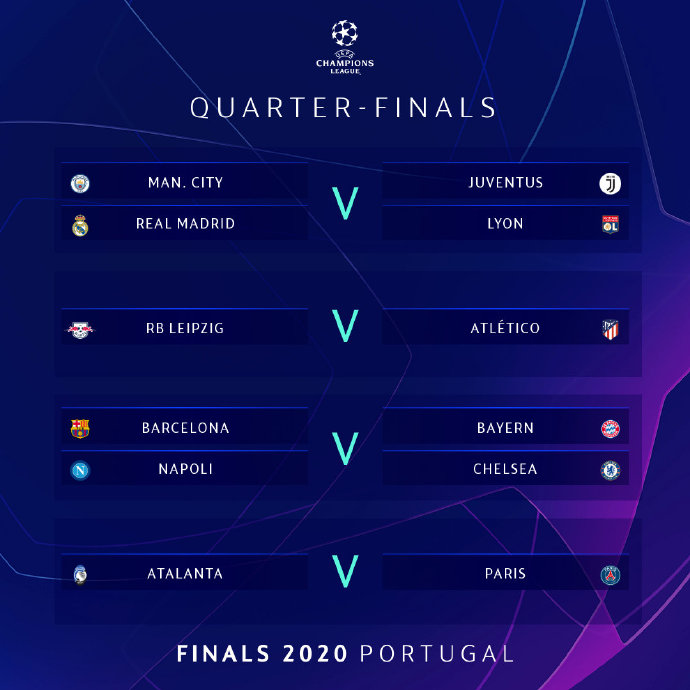 After being suspended for several months, the last highlight of European football this season-the UEFA Champions League will finally be rekindled this weekend. In the next two days, eight European powerhouses including Juventus, Lyon, Manchester City, Real Madrid, Bayern Munich, Chelsea, Barcelona and Naples will compete for the remaining four quarter-finals.

In these 4 1/8 finals, Bayern Munich had the best situation. The advantage of 3 goals ahead of Chelsea in the first leg was difficult to shake. In addition, Manchester City also holds the initiative to advance. The away win and two goals made it difficult for Real Madrid to come back. The other two matchups were between the two. The home game is the advantage of Barcelona and Juventus, but there are hidden dangers.

The teams that stand out from these 4 games will fight each other in the quarter-finals. Prior to this, four teams including Leipzig, Atletico Madrid, Atlanta and Paris Saint-Germain had locked up the quarter-finals before the suspension of the event.

The Champions League has attracted much attention, and the Chinese Super League is in full swing. This weekend, the Super League will play 4 games, of which the most concerned is the fourth round of Group A on Sunday night, Guangzhou Evergrande and Shandong Luneng strong dialogue.

At present, Evergrande is leading the team with three wins. Although Luneng is in fourth place, it has only 4 points. A little carelessness may fall into the second half. There are only 14 rounds in the first stage, leaving less time for teams to adjust, so every game seems more critical than previous seasons. For Luneng, these 3 points certainly cannot be easily taken away by Evergrande.

In addition, the four teams of Guangzhou R&F, Shijiazhuang Yongchang, Hebei China Fortune and Chongqing Dangdai will all launch an impact on the first victory of the season.

18:00 on the 7th, the third round of Group B Wuhan Zall: Shijiazhuang Yongchang

18:00 on the 9th, the 4th round of Group A Guangzhou Evergrande: Shandong Luneng

The CBA playoffs have begun to compete in the semifinals, and the end of the season also means that the climax is getting closer. Liaoning, Xinjiang, Guangdong and Beijing Shougang, the four teams that were promising before the season, finally met in the semi-finals.

In the semifinals of the three-match two-win system, Liaoning currently leads Xinjiang 1-0, while Guangdong is tied with Shougang.

In the first match, facing the Liaoning basketball team, Xinjiang, which played in the all-China class, did not fully play its own technical and tactical characteristics. This is where they urgently need to change in the second battle. The decisive battle between Guangdong and Shougang will be held in prime time on Saturday night.

The Snooker World Championship entered the second round, and the two Chinese players were naturally the focus of the fans' attention, especially the upcoming "Ding Olympics"-Ding Junhui once again faced idol O'Sullivan.

In the first round, O'Sullivan showed off his "Rocket" character again, beating Tachaia 10:1 quickly, while Ding Junhui beat Mark King 10:9. In the historical confrontation, O'Sullivan's record is obviously superior; but in last year's British Championship, Ding Junhui won the championship after defeating O'Sullivan.

This round of duel will take 25 rounds and 13 wins. The first two stages will each have 8 rounds. If nothing happens, the result of the "Ding Olympics" will be produced early on Monday morning.

In another game, Yan Bingtao temporarily led the defending champion Trump 5:3. If he can withstand the opponent's counterattack in the second stage, Yan Bingtao's hopes of promotion will be greatly increased.

On August 2nd, local time, the F1 UK station competed for the race. Hamilton, who started from pole position, led the way, but at the last moment a puncture occurred. He took the punctured tyre and insisted on crossing the finish line and won the championship.

As an event of great historical significance, this week's Silverstone circuit is expected to witness the birth of a new record-if the local combat Hamilton finally wins the championship, he will set a new silverstone track record.

This weekend, the NBA regular season will have many contests. According to league regulations, the 16 teams participating in the playoffs will be decided in the middle of this month. After the rankings, the 16 promoted teams will still participate in 4 rounds of playoffs in accordance with the previous rules, and all of them will implement 7 games of 4 wins.

The LPL summer regular season has entered the final stage, and some teams have completed the regular season schedule. This weekend, popular teams such as JDG, TES, FPX, and iG will all make their debut, and they will strive for a better postseason position.

In addition, the World Championship for the Glory of the King has also entered the semi-final stage. Four teams including AG Super Play Club, TS, DYG, and MTG will attack the final championship.