The 30 Bugatti that were sold at a bargain price

Talking about Bugatti are bigger words. Founded more than 110 years ago, the cars of its first and most fertile era (from 1910 to the beginning of World War II) triumphed p 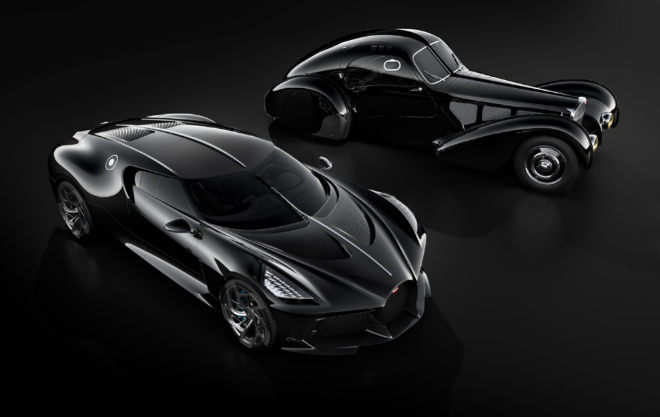 Talking about Bugatti are bigger words. Founded more than 110 years ago, the cars of its first and most fertile era (from 1910 to the beginning of World War II) were equally successful on circuits as between great fortunes, nobles and even monarchs.

Disappeared between 1956 and 1991, when it was recovered by an Italian businessman, it returned to the front line at the hands of the Volkswagen Group, which bought it in 1998. Under its umbrella, the Veyron was born, then the Chiron and now the Divo. Any of them, with prices above a million euros. Although none as exclusive as the Bugatti La voiture Noire, of which only one unit sold for 11 million euros was built in 2019, although rumor mill claims that it was 16 million and would have been paid for by the late Ferdinand Piëch, head honcho of VW for decades.

The car's name comes from what is considered the jewel in the crown: one of only four specimens of the 1936 Type 57 SC Atlantic , designed by Jean Bugatti, son of Ettore (the founder) and who would later be killed in an accident .

Jean reserved for his personal use a unit called 'La Voiture Noire', the legend of which began to please him since he lost track of it in 1938: was it destroyed? Did it sink into the sea when it was taken out of the country? Is it still hidden in some lost barn? Experts say that if it ever appeared, its value would be around 100 million. It may seem exaggerated, but exorbitant figures have already been paid for classic cars. And although the exact figure has never been known, another unit of the Type 57 SC Atlantic would have changed hands a decades ago for between 24 and 31 million euros.

So how much would 30 Bugatti cost, including a unit of another great sacred cow from the brand: the Type Royale 41 from the 30s? Of this last model only six copies were made. One, known as the Coupé Kellner, was auctioned in 1987 for almost 10 million dollars, although its current price doubles that figure ... in euros.

Another, the so-called Park Ward, was the star of the Bugatti collection of cars that John W. Shakespeare had hoarded . The son of a businessman who got rich with fishing gear, he also participated in car races, skydiving, water skiing, growing orchids ... or buying a Bugatti. Up to 30, stored in a dirty garage in Hoffman, Illinois, about 40 miles from Saint Louis. And that made him the largest car collector of the brand in the world.

Until that information reached the ears of Fritz Schlumpf, who along with his brother Hans had created a great textile empire in French Alsace, the birthplace of Bugatti. Fritz was passionate about Bugatti, as a young man he had already acquired a 35b model and set out to have as many cars as possible from the brand. To do this, he was contacting all the Bugatti owners whose existence he knew about to offer to buy them.

The figure is well above what buyers are willing to pay, so in 1963 they sent an expert to assess the condition of the cars. The purchase is discouraged: "Most are full of dirt, broken windows, leaky roof and nesting birds. All cars are in poor condition and none of them have been running for at least 18 months."

However, they decide to continue with the negotiations and, after mutual threats and blackmail, they end up closing an agreement in 1964: $ 85,000, which today would be the equivalent of ... $ 710,000 (or about 650,000 euros at the current exchange rate). In addition, if it was not already a good deal, the price includes the transport of vehicles to France.

On March 30, 1964, the cars leave on a very diverse train that takes them to New Orleans, where they are loaded on a Dutch ship that arrives, weeks later, at the French port of Le Havre. And from here to Mulhouse, to join a collection to which the brothers have been adding magnificent copies of other brands to reach 400 vehicles, more than a quarter Bugatti and among them the personal collection of the founder of the company, with the that were made years after its liquidation in 1956.

The idea is to set up the best automobile museum in the world. But it does not bear fruit, at least with the brothers in front. The crisis of the early 70s and large disbursements in the installations, repair and maintenance of vehicles are taking their companies ahead and, accused of bad business practices, flee to Switzerland.

So the 2,000 laid off workers, who had not wanted to take over the business for the symbolic price of one franc, suddenly find themselves with priceless treasure. First they plan to sell it to collect what is owed to them. Then they choose to run the museum, but with little success. It is only open from 1977 to 1979, before the French State declares the collection of vehicles a National Asset.

The facilities reopened in 1982, after being awarded to a group of associations in the region for the equivalent of seven million euros (another bargain). The museum, with cars (street and competition) that started in 1878, is named La Cité de L'Automobile and occupies an area of ​​25,000 square meters, illuminated by 800 lampposts identical to those of the Alexandre III bridge in Paris. The museum's website, now closed due to the coronavirus, already provides a good idea of ​​its scope.

Since 1989, and by a judicial decision, he was forced to include the names of the brothers, so that it is now known as the Cité de l'automobile-Collection Schlumpf. Of his funds, by the way, some of the vehicles purchased from Shakespeare are missing. And it is that in 1999, again with the courts involved, the widow of Fritz Schlumpf obtained compensation of 25 million francs and the ownership of several cars, which at his death were sold to another collector of Bugatti in the USA. Today they can be seen, in their original state, in their original state, at the Mullin Automotive Museum in Oxnard (California).